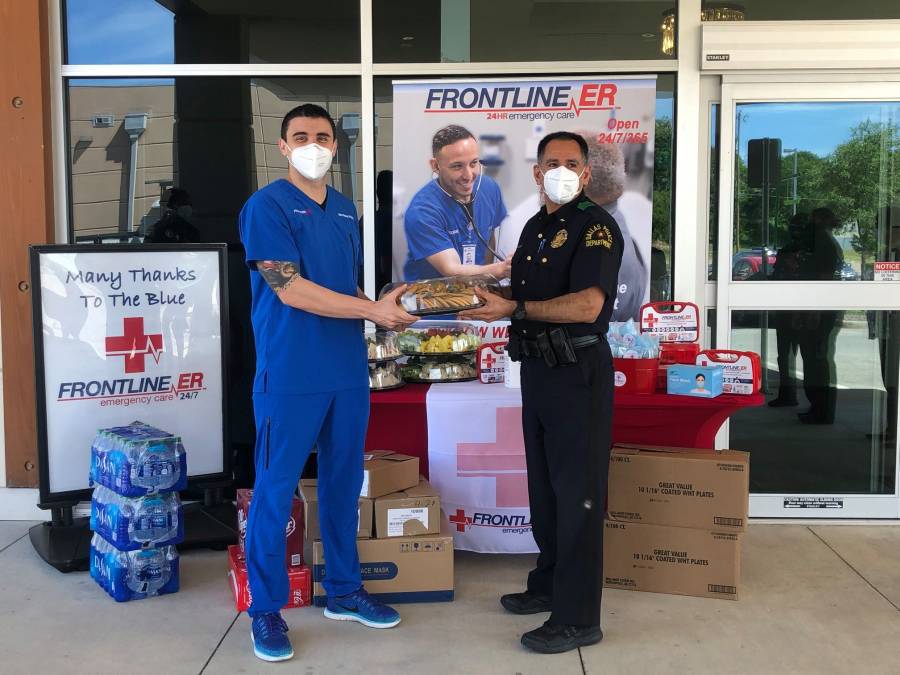 A Dallas Police Department officer and a Frontline ER medical worker share some love during the COVID-19 pandemic.

There are bad cops and corrupt cops and racist cops and brutal cops. But the great majority of police officers are not bad or corrupt or racist or brutal. If they were, given the 375 million annual contacts that police have with citizens, our country would look very different.

Police officers do not get rich doing their jobs. (Have you ever heard someone say, “I’m going to become a cop so I can make a lot of money”?)

Police officers risk their lives protecting us. (Yes, bad guys shoot at cops and try to kill them.)

Police offers do difficult jobs. (One of our sons-in-law is a police chaplain and has done many ride alongs, arriving at homes shortly after suicides or homicides, with devastated family members standing nearby.)

And if shots were fired in your neighborhood and there was no response, your first question would be, “Where are the police?”

Of course, none of this justifies or excuses police brutality. And none of this brings back George Floyd or Daniel Shaver (an unarmed white man shot by police while begging for his life) or others wrongfully killed. And none of this denies that some people become police officers because they are into power or control.

But it does remind us that the current demonizing of police is an unhealthy, unfair, and even dangerous trend.

First it was Lego stopping the promotion of its police sets. (It also “shut down promotional campaigns and marketing for its toy sets that include . . . firefighters, criminals and even the White House.”) In Lego’s own words, “Our intention was to temporarily pause digital advertising in response to events in the US.”

Next were the calls to defund the police, something rightly rejected as absurd and counterproductive (for example, see here and here.)

Now it is the Parmount TV network dropping the Cops show after 30 years (!) on the air. As David Ng wrote on Breitbart, “Whatcha gonna do when the woke mob comes for you?

“Cops — the long-running reality series following  police officers on high-speed chases, drug busts, and other dangerous missions —  has been cancelled after a more than 30-year run as anti-police sentiment continues to sweep through Hollywood following last month’s death of George Floyd while in Minneapolis police custody.”

I’m aware, of course, that Americans hold to widely disparate views of the police based on the communities in which they live (and/or based on the color of their skin).

As the Pew Research Forum reported on June 5, “Just a month before Floyd’s death, a Pew Research Center survey found that 78% of Americans overall – but a far smaller share of black Americans (56%) – said they had at least a fair amount of confidence in police officers to act in the best interests of the public. By contrast, large majorities of white (84%) and Hispanic (74%) adults expressed at least a fair amount of confidence. These views — and the wide racial and ethnic gap in opinions — had changed little over the prior few years.”

This report yielded similar results to a Twitter survey I conducted on June 7, asking, “Do you believe police brutality is the rare exception to the rule or fairly common?”

Of the 818 who cast votes, 76 percent identified as white and 24 percent non-white. (I was only able to use these two categories in the poll.)

Of the white voters, 77 percent said that police brutality was rare and 23 percent it was fairly common.

Either way, where there is a pattern of police brutality, it must be addressed, and where individual officers are guilty, they must be held accountable by the law. With great power comes great responsibility. And where police reform is needed, let it be actively pursued.

But “cop” is not a dirty word, and we should not allow the police force, as a whole, to be vilified and denigrated.

For the most part, despite the horrific and inexcusable exceptions, cops are only your enemy if you’re trying to do wrong. If you want to do right, they are on your side.