Conspiracy Fact: Something Was Seriously Wrong With the 2020 Election

The first in a new series. 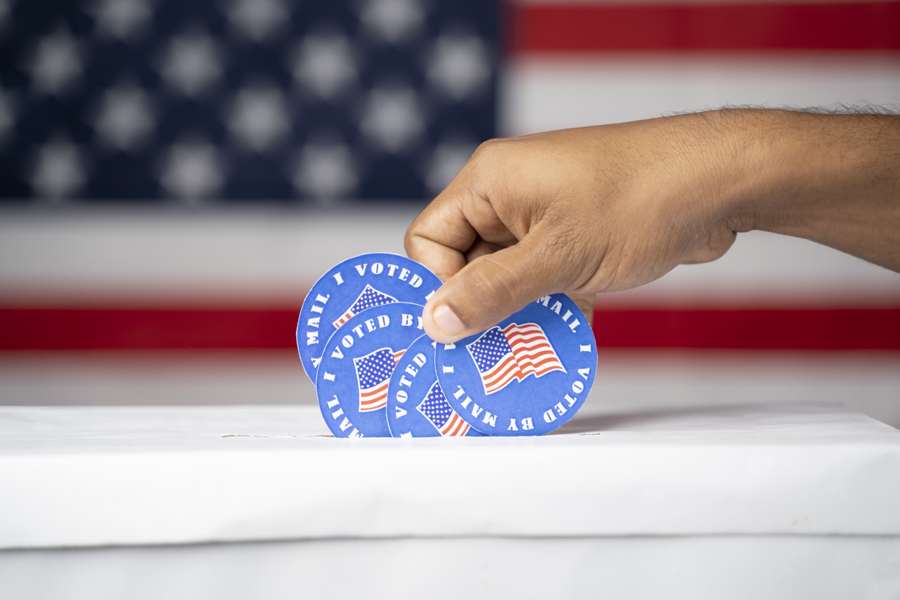 It was a great holiday dinner. Family members had come from three different states, and brought at least three different states of mind along with them. Thank God, we were raised to love each other, because we sure had differences of opinion on some things, including “conspiracy theories” that I would now call conspiracy facts. I kept wishing I had the right answer on the tip of my tongue, the quick, simple point with all the data to back it up.

Oh, well. Lesson learned. It’s too late for those holiday dinners now, but it’s not too late to get ready for conversations yet to come. I’m doing the work now I wish I’d done before. I’m sharing it with you here at The Stream, and I’m launching a series covering many of these conspiracy facts. I’m starting with Conspiracy Fact 1: There was something seriously wrong with the 2020 election.

I’m doing the work now I wished I’d done before. I’m sharing it with you here at The Stream, and I’m launching a series covering many of these conspiracy facts.

Was it stolen? I don’t know. Is there room to wonder about it? Absolutely yes. Is there something seriously wrong about the lack of any serious investigation? Definitely. There’s corruption going on so plainly and out in the open, you can ask your brother-in-law across the table to pull it up on his cell phone, and he’ll have the proof right there in his own hands.

You must aim for the right objective in this discussion, though. We’re talking about dinner conversation, not a criminal trial. You can’t possibly expect to prove the election was stolen. You can show, however, that if there’s anyone messing with American democracy, it’s not those of us who are asking questions. It’s the ones who say we shouldn’t ask.

Know Where to Focus

Here’s how you can show that in conversation, how to keep it simple and focused, and how to produce the evidence that will prove your point.

I would concentrate on these three main points, especially number 3. You can start with either number 1, 2, or 3, depending on what’s been brought up so far. (Number 2 is the least powerful and hardest to prove over meat and potatoes, but you’ll probably want to be ready for it anyway.)

The left loves its labels, don’t they? “Election denier” sounds a lot like “Holocaust denier,” and I’ll guarantee you that’s no coincidence. They want us looking really, really bad. It’s shorthand, really: “You’re a bad person. There’s something wrong with you for questioning the election. Shame on you! Either straighten yourself out or shut up and go away!” All that, wrapped up neatly in two short words.

Did you notice how it changes the subject, though? You start out talking about the election, the evidence, the outcome, and all of a sudden they’re talking about you and the rotten shape of your character. That’s no accident, either. Anything to keep from looking at the facts.

It’s a lie, too. You’re not an election-denier. (If you are, please leave the country, okay?) I take “election denier” to be someone who denies elections in general. Or maybe it’s someone who would say, “Yes, America voted for Biden in 2020, but we don’t care. We don’t accept it!”

Put Them On the Defensive Instead of You

I’ve never met anyone who says that. I’ve only met people who say they’re fully convinced we had a secure, honest, high-integrity election in 2020, so we can’t be sure America really did vote for Biden.

For that, they want to pin a label of shame on you. I’m sorry, but I don’t feel the least bit bad about wanting integrity in our elections.

You don’t need to prove the election was stolen. You only need to show them they’re crazy for not noticing. Or not realizing it matters. Or not caring.

How do you handle that in conversation? I’d start with this question, and follow it where it leads: “I’m talking about the election and evidence, and you’re talking about me, putting a label on me. Why are you so much more concerned about me than you are about our elections?”

That’s called putting them on the defensive. Do it boldly. Keep them there. Make sure they know you’re not denying a thing. You’re standing for America’s election integrity, and you’re not sure we met the standard last time. Ask them why they’re not just as concerned.

2. The Questions Were Never Crazy

You can expect them now to go straight to their next favorite line. “There’s no doubt about this election and there never was any. Look at all the court cases your side lost!”

That’s simply not true — despite those court caseskj.

Not to mention the sheer unlikeliness of a Biden victory, given the kind of campaign he ran. Or slept through, more accurately. Is it crazier to ask questions about that, or to ignore it and say, “Tut, tut, everything’s just fine”?

It Was Crazy — and Corrupt — Not To Investigate

The real craziness was not investigating it fully. Yes, Trump’s team tried. Yes, they failed. You have to grant that, but you also need to put it in context. His people never built a strong public case that Hunter Biden’s laptop contained damning information, either. They never won the public over on the FBI’s unspeakably corrupt “Russia-collusion” case against Trump. Both of those have now been shown to be true. (I’ll cover them in other “conspiracy” articles yet to come.)

The Judge and the Detective

…. A short fable to help you with point number 3.

The judge calls the detective to the bench, a scowl on his face. “It has come to my attention,” he says, “that you’ve been tipped off on a possible extortion case.”

“That’s correct, Your Honor. The tip came in this morning.”

“Do you have proof of this so-called crime?” growls the judge.

“No, Your Honor. Our source gave us plenty of details to work with, but we haven’t started work on it yet.”

“Details don’t impress me, Detective! I need to know if you’ve given those details real thought.”

“Not yet, Detective! Think! Is there no alternate way to interpret the info you were given? Are you even sure a crime was committed? Do you know it beyond a reasonable doubt?”

“No, we don’t, Your Honor. We haven’t even begun the investigation.”

“Reasonable doubt” is indeed the standard for criminal conviction. It’s not the standard that determines whether to investigate!

This tells us the country’s primary investigative bodies — law enforcement and the media — had a vested interest in doing Trump harm. You have to wonder if things would have turned out differently if they’d done their job — if they’d followed the leads, and found out what was really going on in that election.

That’s a what-if, and we can’t prove what-ifs, so I wouldn’t try to oversell it, but we can still point out the stench surrounding the whole thing.

You may have seen Dinesh D’Souza’s documentary 2,000 Mules. If not you can still read the book, and you should. It’s jammed full of solid, verifiable physical evidence to support his claims of systematic, widespread ballot-box stuffing — enough to steal the election.

Is it proof? It might be. I’m in no position to say for certain. Neither are you, and neither is your conversation partner. What you can say for sure is that it’s evidence. You might even mention that it’s so compelling, 73% of Democrats who saw the film would recommend it.

And now is when you ask your relative to pull out his cell phone. Ask him to do a web search for a review of “2,000 Mules.” Just about any review will do. (The best ones are the ones that call themselves “fact checks.”) Read a[few paragraphs and see how these “fact-checkers” handle it. Here’s a sample from Reuters.

In another [scene in the film], a woman wearing a face mask and gloves is seen posting a ballot before turning to place her gloves in a nearby bin. It is claimed in the documentary that she is a “mule” because she was wearing gloves (to hide her fingerprints) and did not look at the bin, so must have had prior knowledge of it being there. The documentary makers did not appear to consider the possibility that the woman was wearing gloves, along with her face mask, as a personal protective measure against COVID-19.

Or in other words, there’s room for reasonable doubt.

You get the same kind of thing in just about every mainstream review. They pounce triumphantly on Dinesh D’Souza, telling him his film proves nothing. And it feels so right when they say so, doesn’t it? Reasonable doubt is the standard, right?

“No Proof? Then Don’t Bother Asking, Even If It Could Be the Most Outrageous Heist in History!”

Here’s where you hope your conversation partner is nodding his head and saying “Yes, yes! It is the right standard!” Then you tell him the fable of the judge and the detective. The judge is correct: Reasonable doubt is the standard. But this judge is badly wrong, too: It’s the standard for conviction, not the standard for opening an investigation.

These fact-checkers tell us we can dismiss “2,000 Mules” because it doesn’t reach the standard of proof. Even though it really is evidence of a possible crime, and not just any crime. If it’s true, it’s the most outrageously criminal act in American history.

Is that not worth looking into? Should we dismiss the evidence without bothering to track down what it means? Or are they afraid of what it might mean? That if they looked into it, they might end up having to deny that Joe Biden won the election. If they knew the truth, they might have to become “election-deniers,” too!

But no. “Election denier” is the wrong label now, and it would be then, too. They wouldn’t be election deniers. They’d be champions of truth.

Who Are the Real Crazies Here?

Bu you have to wonder if truth matters that much to them. If Biden and the Democrats had the goods to show it really was “the most secure election in American history,” you’d think they’d have jumped in and investigated it more enthusiastically than any Republican. Instead they’re content with saying, like the judge in the fable, “No proof? Then don’t investigate, you bad person you!”

Just my opinion, but of all the strange things about the 2020 election, I’d saykj none is stranger than that.

Remember: You don’t need to prove the election was stolen. You only need to show them there’s something wrong with anyone who doesn’t see the problems. Or doesn’t think it matters. Or doesn’t care.