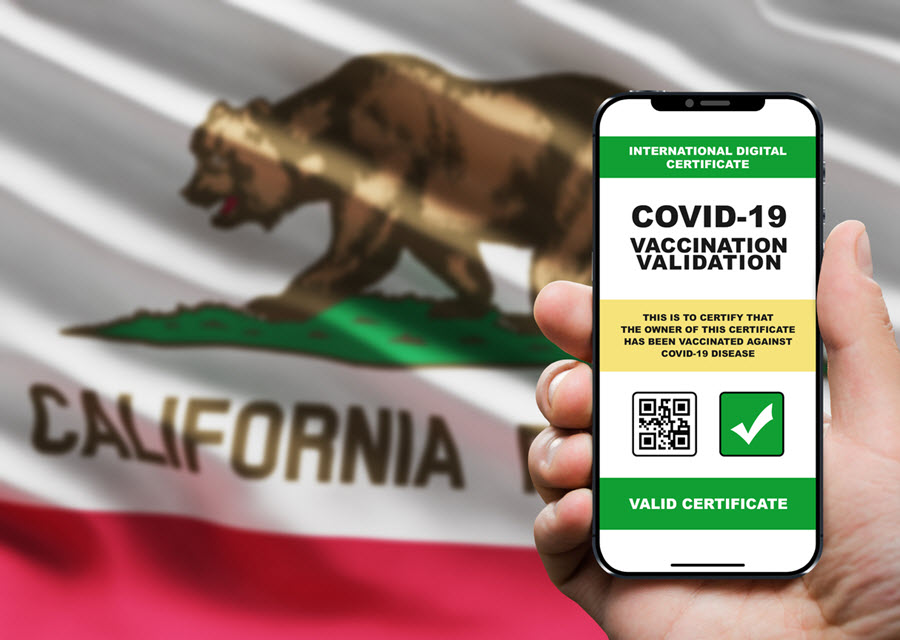 By Joseph D'Hippolito Published on September 3, 2021 •

As California goes, so goes the nation, to paraphrase an old political proverb. Americans long recognized California as a trend setter in popular culture, business and politics. But if the state’s Legislature embraces a current trend, California could take the nation down a destructive path.

The Assembly, the Legislature’s lower house, is thinking about imposing vaccine mandates on most private businesses. To do this, the heavily Democratic body would rewrite AB 455, a transportation bill.

If the Legislature passes the new bill and Gov. Gavin Newsom signs it, California could become the first state to make vaccine mandates part of state law.

But since the Legislature will adjourn Sept. 10 for nearly four months, and Newsom will face a recall election Sept. 14, supporters had little time to act. Republican Assemblyman Kevin Kiley, one of the candidates in the recall, tweeted Aug. 30 that AB 455 “is dead for the year.”

Nevertheless, expect California’s Democrats, or their colleagues in other states, to introduce similar legislation eventually.

“Gut-and-amend bills can be particularly insidious,” wrote the Globe’s Katy Grimes. “This secretive process often leaves lawmakers, as well as the public, little or no time to review entirely new legislation dropped into an old bill. And usually, the subject of the legislation has nothing to do with the bill’s previous legislative issue.”

A draft version that the Los Angeles Times obtained Aug. 26 stated that no Californian would be able to enter a restaurant, theater, gym, hotel or sports arena, without proof of vaccination. The revised bill also demanded employees, job applicants and independent contractors to provide similar proof or take weekly COVID-19 tests.

At the same time, another Democratic Assembly member, Marc Levine from liberal Marin County, introduced a more arbitrary resolution. Under Levine’s measure, no Assembly member could sit in sessions or receive salaries without vaccination proof. “This seems like it disenfranchises millions of voters who voted for these people,” a source told the Globe. “Is this voter suppression?”

Levine’s resolution might not have a chance but Grimes believes passage isn’t his ultimate goal.

“While this is a resolution which is not officially enforceable,” she wrote, “a resolution is often used ahead of controversial legislation to ease legislators into the concept.”  (emphasis added)

If so, both Assembly members are ignoring legitimate concerns about COVID-19 vaccines that rely on mRNA spike proteins.

As The Stream recently reported, a British medical journal published a study showing that spike proteins increase the risk of infection from the Delta variant. The study’s authors recommended that pharmaceutical companies fix their vaccines to decrease the risk.

A Nobel Laureate went further. Luc Montagnier, a French virologist who won the 2008 Nobel Prize for discovering the HIV virus, said that vaccines actually create the variants. The vaccines produce antibodies that force the virus to adapt quickly or die.

“The history books will show that it is the vaccination that is creating the variants,” Montagnier said. “There are antibodies created by the vaccine. This is where the variants are created.”

A Belgian virologist, Geert Vanden Bossche, explains how. The antibodies that a vaccine produces stick to the viruses but the viruses penetrate the antibodies, overwhelm the immune system and become more potent.

So if all this is true, why do medical bureaucrats, let alone legislators, ignore it? What is their ultimate agenda?

Here’s a more important question. If such legislation comes to your state, what can you do?

First, besiege your state legislators. Tell them not to support such laws. Organize campaigns to that effect. But if the legislation passes, explore the possibility of class-action suits or even passive resistance. Moscow’s residents used that second tactic to force Mayor Sergei Sobyanin to drop electronic vaccine passports on cell phones.

On June 28, Sobyanin ordered restaurants to demand proof either of vaccination, a negative COVID-19 test taken within 72 hours or recent recovery from the disease. As a result, Muscovites staged a boycott. A Russian bank estimated that restaurants lost more than 50 percent of their business within 24 hours of Sobyanin’s mandate.

Some restaurant owners refused to comply.

“The government’s requirements are complete nonsense and we are not going to discriminate between vaccinated and unvaccinated customers,” one told Moscow Times. “We have lost about 70 percent of our revenue just this week. We and 11 other restaurateurs are in the process of filing a petition to the Moscow authorities because something needs to change. Otherwise, our businesses will die.”

Something did change. On July 16, Sobyanin rescinded the mandate.

The possibility of California’s Legislature putting vaccine passports into state law has implications beyond medicine. Vaccine mandates coming from governments on every level could form the basis for an electronic social-credit system. China developed and uses such a system to monitor and control behavior.

As The Stream discussed, vaccine passports could become the prototype for the Book of Revelation’s “mark of the beast.”

History has seen this sinister behavior before. In February 1933, four weeks after Adolf Hitler became Germany’s chancellor, arson destroyed the Reichstag, that nation’s parliament building. The Nazis quickly blamed a mentally deficient Dutch Communist who was starting fires nearby.

Hitler, seeing a chance to suppress the Communists, took advantage of a loophole in the Weimar Republic’s constitution to sponsor the Enabling Act. That legislation would grant him the power to make and enforce laws without parliamentary consent for four years. Four weeks after the fire, the Reichstag approved the act, and President Paul von Hindenburg signed it.

In August 1934, Hindenburg died. Hitler immediately consolidated the powers of his own office with Hindenburg’s, thus becoming Führer. The rest, as they say….

The implications are obvious. COVID-19 is our generation’s Reichstag fire.