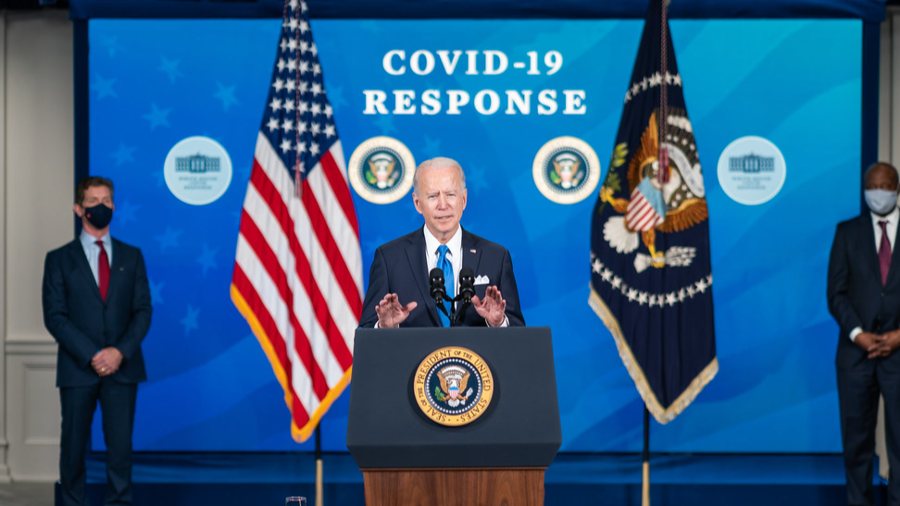 Imagine holding federal funds hostage to force health workers to get vaccines. Then imagine where it stops.

“I’m using the power of the federal government as a payer of healthcare costs to ensure we reduce those risks to our most vulnerable seniors,” Joe Biden said. The Department of Human Services will issue the mandate, in conjunction with the Centers for Medicare and Medicaid Services (CMS) and the Centers for Disease Control and Prevention (CDC).

Biden’s decision reflects a proposal that a think tank made less than two weeks earlier.

On Aug. 6, three members of the Center for American Progress proposed linking Medicare and Medicaid reimbursement for all health-care providers to staff vaccinations. The three made their argument on the Center’s website.

“Making COVID-19 vaccination mandatory for providers participating in Medicare and Medicaid would protect vulnerable patients, set a positive example for other employers, and contribute to the national effort to contain the virus,” wrote Jill Rosenthal, Emily Gee, and Maura Calsyn. Rosenthal is the Center’s director of public health policy. Gee is its senior economist on the subject. Calsyn is the Center’s vice president and coordinator for health policy.

What if vaccination rates keep lagging behind projected targets? How far would the federal government arm-twisting go?

The authors didn’t address tying individual benefits to vaccination. But their proposal raises that frightening possibility.

Since the federal government adopted part of that recommendation, what would prevent people who need Medicare and Medicaid from eventually being targeted?

Rosenthal, Gee, and Calsyn cite one example of how Medicare dictated social change. In 1966, Medicare’s first year, hospitals had to desegregate racially to receive reimbursement. That demand led “more than 1,000 hospitals to integrate their medical staffs and hospital floors in less than four months,” the authors wrote.

“A consistent, national policy is necessary to overcome employers’ perceived financial disincentive to mandate vaccination,” they continued. Doctors, hospitals, and health-care systems that already are understaffed want to keep their remaining employees, the authors wrote. “However, a federal rule requiring full vaccination in virtually all health-care jobs would level the playing field, ensuring that no individual facility is disadvantaged by mandating employee vaccination,” they argued.

But you can’t equate mandatory vaccination with mandatory desegregation. Integration remedied long-standing violations of constitutional rights. Mandatory vaccination, however, infringes on employees’ rights not to receive shots that remain experimental. Most importantly, the authors ignore the fact that many health-care workers believe the vaccines are dangerous.

As The Stream reported, COVID-19 cases spiked in Israel, where 85 percent of the population received shots and 58 percent were fully vaccinated. At one Jerusalem hospital, vaccinated Israelis represented 85 percent to 90 percent of new admissions. In Massachusetts, 74 percent of new cases came from vaccinated patients, reported the CDC in July.

On Aug. 9, the Journal of Infection, a peer-reviewed monthly from the British Infection Association, published a study that contradicts the political narrative. The study shows that the spike proteins in mRNA vaccines increase the chances of being infected with the Delta variant. It also recommends that manufacturers fix their COVID-19 vaccines to eliminate that risk.

The Food and Drug Administration lists “vaccine-enhanced disease” as one of the possible side effects. Others include severe inflammation of the brain and spinal cord, stroke, and severe heart attack. A slide listing those effects appeared during an FDA video presentation — for less than a second.

Could this be why neither the CDC nor Moderna, a major vaccine manufacturer, demand that their employees get shots?

But the CMS, the authors argue, can force health-care employees to be vaccinated, even without public input and discussion. The CMS can make the demand by including it in the Center’s Conditions of Participation and Conditions for Coverage. Those set the health and safety standards that doctors, hospitals, and nursing homes must meet to get funds.

“The Medicare and Medicaid Conditions of Participation and Conditions for Coverage are untapped levers the federal government can use to support this effort,” wrote the authors, who added that those mandates “are national in scope, making them a powerful tool to effectuate change when there is local or regional reluctance.”

Normally, any change in those mandates must take place after public input and discussion. But the CMS can waive that requirement when it’s “impracticable, unnecessary, or contrary to the public interest.” CMS did so last August by imposing contact tracing in hospitals, in May by mandating education about the vaccines in nursing homes, and this week with its announcement.

“CMS strongly encourages nursing home residents and staff members to get vaccinated as the agency undergoes the necessary steps in the rule-making process over the course of the next several weeks,” a release stated. “CMS expects nursing home operators to act in the best interest of residents and their staff by complying with these new rules, which the agency expects to issue in September.”

But what if vaccination rates keep lagging behind projected targets? How far would the federal government’s arm-twisting go?

On Aug. 12, the Biden regime floated the idea of vaccine passports for interstate travel. As The Stream reported, French President Emmanuel Macron already issued a similar mandate Aug. 9. Since Rosenthal, Gee, and Calsyn believe in linking Medicare’s and Medicaid’s reimbursement costs to vaccination, what would prevent tying entitlement benefits to it, given Washington’s apparent desperation? Would state governments adopt the idea for their own entitlement programs?

Yet underlying all those questions is one that’s far more baffling:

Why do authorities insist on forcing upon the public a vaccine despite legitimate concerns about its effectiveness and safety?