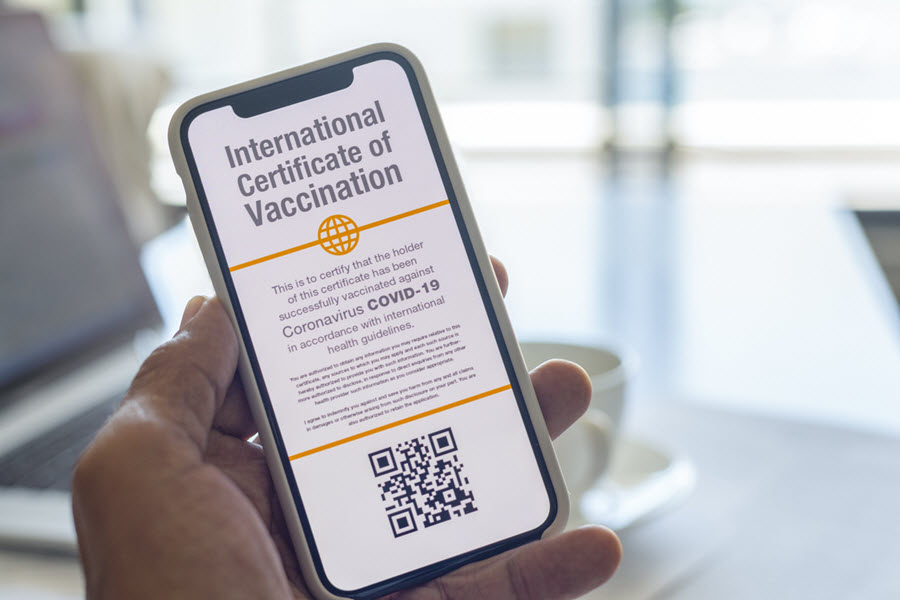 Within 24 hours earlier this month, both of New York’s top Democratic officeholders intensified the pressure for residents to get COVID-19 vaccines.

Vaccine passports are a prototype. They provide the perfect means for governments and businesses to force compliance with autocratic demands, using health as an excuse.

That order reflects more than just a personal political rivalry. Or the arbitrary denial of constitutionally protected rights. It signifies the attempt to groom the masses to obey someone far worse than a tyrannical mayor or governor.

The Book of Revelation shows who that someone is and how he will demand blind obedience.

He required everyone — small and great, rich and poor, free and slave — to be given a mark on the right hand or on the forehead. And no one could buy or sell anything without that mark, which was either the name of the beast or the number representing his name. (Revelation 13:16-17)

The “he,” the “beast” in those verses is the “Antichrist,” a satanic caricature of Jesus. The “Antichrist” will promise world peace, appear to deliver it, then demand worship. The “mark” is some form of identification that will distinguish his followers and turn life’s ordinary tasks into privileges.

Anybody without it will be put to death for refusing to worship the “Antichrist.” Anybody with it will receive divine condemnation. (Revelation 14:9-12)

Does this mean that proof of vaccination, often called a vaccine passport, is the “mark of the beast”? Not in and of itself. Nevertheless, vaccine passports are a prototype. They provide the perfect means for governments and businesses to force compliance with autocratic demands, using health as an excuse.

Starting Aug. 9, French citizens had to display vaccination proof if they wanted to go to a restaurant or a café, use long-distance transportation, or even visit a hospital. On Aug. 11, Los Angeles’ City Council voted 13-0 to have City Attorney Mike Feuer write an ordinance demanding similar proof to enter most buildings open to the public, including “retail establishments.”

“Those who reject that responsibility should temporarily lose some of society’s privileges until their reckless behavior no longer endangers the rest of us,” wrote Feuer, who called the policy, “No Shots, No Admission.”

A mayor in the Philippines even went further.

On July 29, Mayor Junard Chan of Lapu-Lapu, a city with about 500,000 residents, issued an executive order preventing the unvaccinated from buying essentials — including food.

“Effective August 25, 2021, only vaccinated persons, upon presentation of their vaccination cards, shall be allowed to enter public and private markets including department stores, supermarkets, grocery stores, and convenience stores,” the order stated.

Chan said he issued the order to promote vaccination. The intimidation apparently worked. Chan claimed on his Facebook page that the average daily vaccination rate rose from 2,000 to 5,600.

Israel, as it often does in prophecy, serves as a barometer. In November, Dr. Eyal Zimlichman, the chief medical and innovation officer for the prestigious Sheba Medical Center in Tel Aviv, described how Israelis could be persuaded to get the vaccines.

Whoever is vaccinated will automatically receive ‘Green Status,’ Zimlichman told the Knesset. Therefore, you may vaccinate, and receive Green Status to go freely in all the Green Zones: They’ll open for you cultural events, they’ll open to you the shopping malls, hotels, and restaurants.

You may decide you’re not vaccinating, and if you do want to enter these areas you’ll need to submit to a PCR test, and therefore I believe people will understand by themselves that the vaccine will return them to regular life and they’ll vaccinate themselves, without our obligating them.

The Cure is the Disease

But COVID-19 cases have spiked in Israel, despite the fact that 85 percent of eligible Israelis received shots. About 58 percent of the citizenry is fully vaccinated. Yet on Aug. 5, Israel’s health ministry reported 3,843 new cases.

“We are going to be right in the same spot that we were exactly one year ago,” said Dr. Eitan Wertheim, director-general of the Rabin Medical Center near Tel Aviv. “We are on the same route.”

So, in the meantime, Israel will need to prepare by stepping up its infrastructure and funding of the health system, while monitoring the airport, Maayan Jaffe-Hoffman wrote in The Jerusalem Post, because until the world is vaccinated, there will be more mutations and more waves of the virus — abroad and within the Jewish state.

But if the vaccines make the pandemic worse, how will more vaccination remedy the problem? Why aren’t responsible authorities in government and medicine investigating these apparently malfunctioning vaccines? Why are vaccine manufacturers shielded from legal liability? Why aren’t journalists asking serious questions and demanding honest answers?

More importantly, why are authorities playing games with people’s health and livelihoods?

Of course, anyone asking questions gets immediately branded as opposing science. But as The Stream reported in February, corporate interests use such tactics, often by manipulating social media, to silence potential dissent.

Be aware when interests attack an issue by controversializing or attacking the people, personalities, and organizations surrounding it rather than addressing the facts, said Sharyl Attkisson, who won five Emmy Awards for CBS News. In other words, instead of questioning authority, they question those who question authority.

Many have succumbed to the intimidation. After French President Emmanuel Macron issued his vaccine mandate July 12, more than 7 million complied. Many others, however, are through with being manipulated.

Hundreds of thousands around the world are protesting forced vaccination, vaccine passports, lockdowns, and masks. In Italy, protesters burned their vaccine passports to show support for the unvaccinated.

During protests in Paris, one Frenchman carried a sign with a message that’s more ominous than he probably realizes.