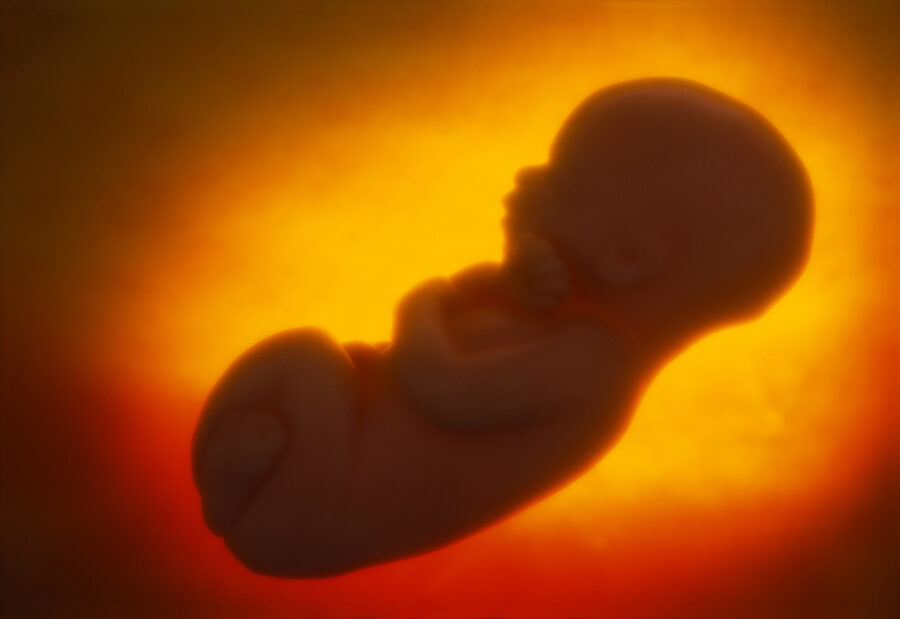 If you had been present on the Hill of Calvary on Good Friday 2000 years ago, you would have witnessed the gruesome death of a man on a cross executed as a common criminal.

Only in the light of faith, however, would you have come to understand that experience as an atoning sacrifice that fulfilled the ancient imagery of the Paschal Lamb. The blood of the lamb applied to the doorposts and lintels of the Israelites’ homes saved them from the destroying angel, (Exodus 12:13) as it saves all humanity now from the power of the devil. The imagery of blood on wood has a long spiritual pedigree.

But blood sacrifice is a double-edged spiritual reality. It also defines the modern day pro-abortion movement in an inverse and perverse way. Abortion does not kill a man who freely offers Himself in sacrifice to the Father but an innocent child who is offered as a sacrifice by a mother.

Abortion parodies the divine sacrifice. The Evil One lacks God’s creative powers. He can only mock Him with illusory signs and wonders, (as in Revelation 13) and attempt to set up a counter kingdom to draw God’s children away from Him. Satan too desires worship, which makes his challenge to God’s authority complete, at least in his own mind. (For help with this article, I consulted a priest who for decades has imitated Christ by exorcizing evil spirits.)

And nothing in the modern world manifests this defiance of divine authority more clearly than the practice and industry of abortion.

As so many abortion activists have frankly admitted over the years, abortion is their “sacrament,” a form of worship. Today, this admission is more than theoretical. In August 2020, the Satanic Temple published its “Satanic Abortion Ritual” replete with step-by-step guide, instructional video, Q & A forum, and a massive amount of supporting resources. You need a strong stomach to look at this material.

This evil is not human in origin. It can only be defeated by a greater spiritual force of good: the divine, atoning blood of Christ.

But the Satanists are latecomers. Their ritual is just the logical end point of a process that started decades earlier by first co-opting liberal Christian clergy to sanitize the abortion decision using Christian language. Then they offered “blessings” over abortion centers to consecrate them for the “sacred” work that would take place inside their walls. The infamous late-term abortionist George Tiller of Witchita, Kansas even went so far as to offer ghoulish “baptismal ceremonies” for recently aborted children after he killed them.

In other words, over several decades, the abortion movement morphed from a woman’s rights movement into a diabolical religion, and it acts the part. It has

The Monolith of Roe

But more vital to the religion of abortion than any other force has been the legal monolith of Roe v. Wade, which sanctified abortion as an element of America’s civil religion. Though Roe is not a law, as such, in the public consciousness, abortion is the law — period — and Roe has provided the ultimate protection for the institution of blood sacrifice.

The presumption of legitimacy that Roe bestowed upon abortion has given it the status of a “sacred” institution of American culture, much as the soldiers who stand guard at the Tomb of the Unknown Soldier evoke a reverent silence in the onlookers by their ritual presence before a national memorial of those who died for the cause.

When it was recently revealed that Roe might be reversed by the same court that created it almost 50 years ago, it’s not an exaggeration to say that all hell broke loose in the pews of the church of abortion. And because they have defined this as a religious issue, the church of abortion has essentially declared war on the only other institution in society that has consistently opposed it in principle and through time, the Church of Christ. Their militant message to us is this:

“If you stop us from killing babies, we’ll take it out on you — violently.”

The Logic of the Abortion Church

Decent people don’t think this way, but we shouldn’t be surprised at the reaction of abortion advocates. It is totally consistent with the twisted logic of a demonic religion that considers violence against innocent children a sacrament. In their darkened minds, the possibility of ending Roe is an existential issue because it seems to strike at the very heart of their protected worship system.

What shocks our side the most, I think, is the vehemence of the reaction, but again, that too fits their template. With the leak of the draft SCOTUS decision, the church of abortion staged instantaneous “peaceful protests” at courthouses across the nation and targeted the Supreme Court justices’ homes. Parishioners of the abortion church immediately vandalized Christian churches by spray painting pro-abortion slogans on their walls and doors. It’s the modern equivalent of the biblical blood on doorposts.

Why do they not vandalize schools or city halls or libraries or businesses? Well, it’s a religious war, and their slogans and chants all expose the perverse worship of their demonic religion: “Jesus loves abortion,” “Thank God for abortion,” “Keep your religion off our bodies,” “Stuff your rosaries,” in addition to their standard war slogans like “My body, my choice” and “Keep your hands off my uterus,” etc.

A group invoking the deceased Ruth Bader Ginsburg threatened to invade Catholic churches on Mothers’ Day weekend: “Stuff your rosary and your weaponized prayer. We will remain outraged after this weekend, so keep praying. We’ll be burning the Eucharist …” among other absurdities, but the logic is clear: “You take away our sacrament, we attack yours.”

The symbolism of Mothers’ Day weekend was also lost on no one: “You strike at our planned barrenhood, we strike at your motherhood.” As it turned out, the planned Mothers’ Day sacrileges came to very little, thankfully, but a pro-life political action committee in Madison, Wisconsin wasn’t so lucky. It was firebombed and vandalized with the unsubtle message, “If abortions aren’t safe, you’re not either.”

Idle threats? Hardly. The threat of the abortion church remains — because the spiritual war remains.

A spiritual evil that has grown into a killing powerhouse over the decades cannot be defeated by legislation, or a court decision, or education, although we are not absolved from working insistently on these goals. This evil is not human in origin. It can only be defeated by a greater spiritual force of good: the divine, atoning blood of Christ.

Let’s follow the lead of those religious leaders who are urging us to return to church, get down on our knees, and invoke with unwavering hope the Sacrifice to end all sacrifices. His blood defeated evil once on a Hill called Calvary, and He can do it again in America.

Debunking the 6 Best Arguments of Pro-Choicers