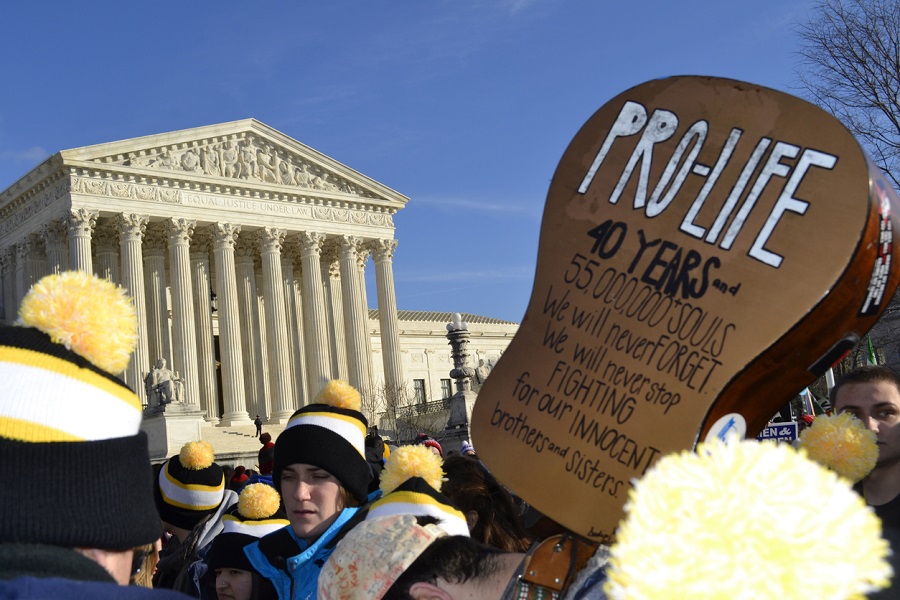 According to an exclusive story on Politico, the Supreme Court is poised to overturn Roe v. Wade when ruling on the Dobbs v. Jackson in June.

An alleged draft of the majority opinion, written by Justice Samuel Alito and leaked to Politico, states that, “Roe was egregiously wrong from the start,” because of which, “We hold that Roe and Casey must be overruled.”

Indeed, the opinion continues, “It is time to heed the Constitution and return the issue of abortion to the people’s elected representatives.”

According to Politico, which linked the full text of the opinion in its article, “A person familiar with the court’s deliberations said that four of the other Republican-appointed justices — Clarence Thomas, Neil Gorsuch, Brett Kavanaugh and Amy Coney Barrett — had voted with Alito in the conference held among the justices after hearing oral arguments in December, and that line-up remains unchanged as of this week.

The three Democratic-appointed justices – Stephen Breyer, Sonia Sotomayor and Elena Kagan – are working on one or more dissents, according to the person. How Chief Justice John Roberts will ultimately vote, and whether he will join an already written opinion or draft his own, is unclear.

The 98-page opinion, described as a first draft and which appears to be genuine, was reportedly circulated on February 10 among the other justices. This means that, if the reporting in Politico is accurate, the majority has remained solid for nearly three months, if not longer, which is a very positive sign.

Pray for the Justices

On the other hand, now that this has been leaked in what Politico describes as “a rare breach of Supreme Court secrecy and tradition around its deliberations,” the obvious question is, Who leaked this document, and why?

Would a pro-life conservative leak this opinion to the public? That is highly unlikely, since releasing it in advance only gives the opposition more time to pressure one or more of the justices to change his or her views. And would a pro-life conservative leak this to Politico, which is more left-leaning than right-leaning? That is questionable as well.

May God give the justices deep conviction, righteous judgment, and backbones of steel.

In any case, the opinion is now out, along with a list of the justices who allegedly supported it. (Note that three of those Justices were appointed by President Trump.)

That means that much prayer is needed for each of them, since they are about to experience the most intense battle of their lives, with an all-out assault the likes of which we can hardly imagine.

There will be the private appeals from colleagues, the attack of the media, the threats to their families, the spiritual bombardment, the pressure of DC, and more.

Right now: Barricades are up around the Supreme Court building, just minutes after reports from Politico were leaked indicating SCOTUS has voted to overturn Roe v. Wade. pic.twitter.com/LxR9rbs6TF

Be Warned: Votes Have Flipped Before on Abortion

And let’s remember that, back in 1992, when Roe should have been overturned in the Casey ruling, a preliminary vote showed Justice Kennedy ready to vote against Roe.

But, as reported already in 1992 by the Washington Post, “The Supreme Court on June 29 affirmed, instead of overturning, the Roe v. Wade abortion standard because Justice Anthony Kennedy changed his vote — a flip attributed in court circles to liberal constitutional scholar Laurence H. Tribe’s pulling strings backstage.

Two months later, it is clear Kennedy flipped not only his long-held abortion position but also his vote in the secret conference on the Planned Parenthood of Southeastern Pennsylvania v. Casey decision last fall. That extraordinary switch by a conservative justice stunned antiabortion forces and soured the internal atmosphere among the brethren as the court’s new term begins.

This shows how exotic politics inside the Supreme Court can override the designs of presidents. Despite more than 25 years without a justice being nominated by a Democratic president, the court has been pulled leftward by a brilliant law professor utilizing persuasion, flattery and law clerks.

Did Tribe really have that much of a role in flipping Kennedy? That is a matter of debate.

But what is certain is that Justice Antonin Scalia had spent an hour with Kennedy discussing the case with him after he became concerned about where Kennedy stood. After their talk, Scalia felt confident that Kennedy was solidly with the anti-Roe majority, only for him to flip shortly thereafter.

What Happens if Roe is Overturned?

And what happens if Roe is overturned? We will walk straight into an impassioned, even frenzied potentially violent, ideological civil war, one that could quickly divide America into pro-life states vs. pro-abortion states. (For the record, if there will be violence as a result of this hoped-for overturning of Roe, I expect it to come from the left. Immediately after the decision was leaked barricades went up around the Supreme Court.)

But that kind of separation, not one that physically divides America but that one that spiritually and ideologically separates us, might not be a bad thing at all.

In fact, we already see that happening with some states passing pro-life legislation that the Supreme Court has not yet overturned and other states passing their most extreme pro-abortion laws.

We also see this with states dividing over transgender issues. The separation is getting clearer by the day.

Perhaps God Himself will weigh in on the matter, bringing evident blessing to those states which honor life (and I don’t just mean material blessing) and withholding that blessing from those states which exalt the “right” to abortion. (Or should we say the “rite” of abortion? For my recent article on “The Religion of the Left,” see here.)

For the moment, though, we are getting ahead of ourselves with this discussion. What is needed right now is prayer for the Supreme Court to do what is right and overturn Roe. May God give the justices deep conviction, righteous judgment, and backbones of steel.

And may we are who pro-life keep bringing a persuasive argument to change hearts and minds. Overturning Roe is only part of the battle. The battle in the court of public opinion must be won as well.