Are the Democrats Ruled Now by Demons? The 10-Year-Old Rape Victim’s Story Might Prove It 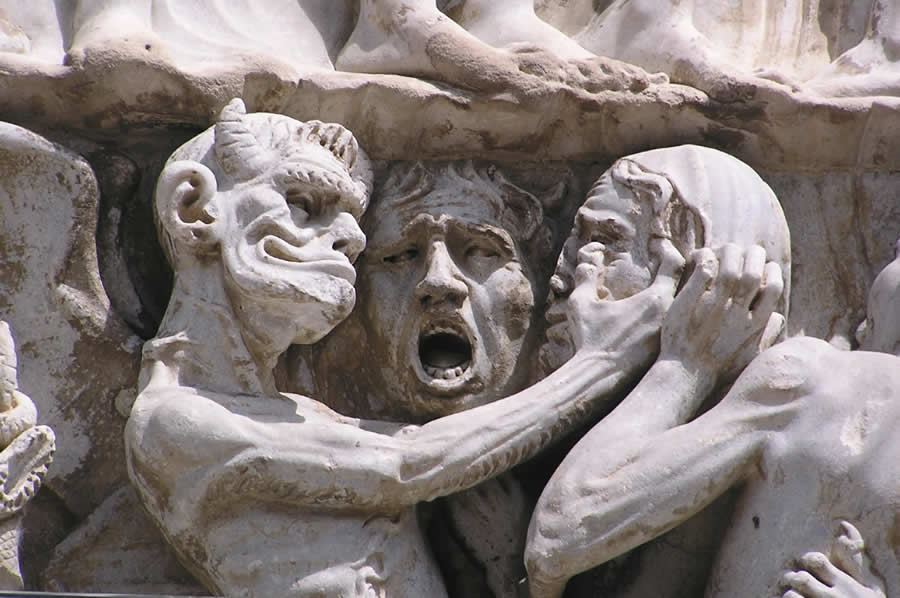 We’re called to love our enemies. To pray for those who persecute us. That means we’re to wish their salvation, their conversion from error and evil.

A special challenge arises when such an enemy is to all appearances possessed by spirits we’re not called to love, whose salvation is impossible. We don’t want to mistakenly direct love and kindness to the principality or power that’s tormenting some damaged soul.

I’ve already made the case here that the Democrat party has morphed from a fallen organization addicted to errors into something much, much darker: an association of evil, which treasures active evil in its core principles and practice. From the Blue State Nursing Home COVID Genocide and abortion through all nine months, to the full-on embrace of sexualizing children and castrating them, there isn’t much room left for nuance.

The Reign of Demonic Regimes

Whole countries have fallen into the hands of such organizations before. In 1939, two such evil regimes allied and invaded Poland, then fell out in 1941 and fought each other savagely till 1945. Vast nations such as China, and unhappy little places like Cambodia and Rwanda, have fallen prey to possessed regimes. So have smaller communities, such as Jim Jones’ tragic socialist commune in Guyana. And now it has happened to the Democrats.

What If the Possessed Person Is Happy?

The challenge to love correctly becomes almost insurmountable when the enemy in question isn’t just possessed, but perfectly so. “Perfect” possession is the term experienced exorcists use to describe a soul that isn’t even unhappy about its condition. It has conformed itself to the Enemy, even welcomed him in. So there’s no spewing vomit, rolling eyes, or thrashing about on the bed.

Instead you face a smiling, perhaps even charming sociopath. If you brought up his condition, he’d just shake his head and mutter something about your “religious fanaticism.” Pope Pius XII diagnosed Adolf Hitler as perfectly possessed. Based on my brushes with him, I think white supremacist David Duke was too. But I’m no expert on this, thankfully.

The Democrats Demand Prayer and Fasting

Today I became convinced that the Democrat party has crossed the threshold, the point of no human return. That the organization now deserves to be classed with the Nazis, the Bolsheviks, the Mafia, Mexican drug cartels, and the circle of pervert occultists who shaped Margaret Sanger’s soul. The party doesn’t merit argument, but calls for prayer and fasting … from a distance.

Abortion, Rape, and the Law

What convinced me? A news story I read. Before I plunge into the sordid, infuriating details, however, let me lay out a moral problem, and several potential solutions. I’m speaking of the legal conundrum presented by rape exceptions to abortion laws. Most pro-lifers admit that this is tough one, and our political advocates are all too quick to cave. There are four positions, logically, one could take:

Virtually all Democrats in public office or authority hold 1). A good number of Republicans hold 2), and would gladly pass laws with loopholes so big you could drive a medical waste truck through them. I think the only morally acceptable options are 3) and 4), and that political reality will dictate which one we choose.

The Democrats have chosen, with infernal cynicism, to pretend that the only alternatives are 1) and 4). They gladly weaponize rare, tragic cases of monstrous abuse of women resulting in pregnancy to keep intact a status quo where almost 1,000,000 American babies die each year … for sexual convenience (if not of the women, then of their men). They use the victims of human trafficking and parental abuse as human shields, so they can cling to the ethics of the Marquis de Sade and Hugh Hefner.

And nothing makes that clearer than the case of the 10-year-old rape victim whom Joe Biden decided to use. We must steel ourselves and look at this story in granular detail to understand how evil the Democrats really are, and wish to remain. From that unhappy exercise, we’ll learn exactly how wicked and inhuman the pro-choice movement really is.

First we learned from Joe Biden that a young girl had been raped, and couldn’t get an abortion because of pro-life laws in her state. Next we found out that in fact the state in question permitted such abortions. After that we discovered that the rapist was an illegal alien, one of millions Biden waved freely into our country. Then we learned that the abortionist had lied about the rapist’s age, so she wouldn’t have to file a police report.

Then things got worse. We found out next that the victim’s mother didn’t want the rapist prosecuted. At first, I imagined that might be because he was in a cartel, and she feared retribution. But nope. The rapist is her boyfriend, and she wants to keep him. So she’s willing to pimp out her daughter, and kill her grandchild, to keep rapist boyfriend happy — and in America, since he could be subject to deportation.

For all the squalid, degrading and (yes) demonic details, go read Mia Cathell’s carefully reported story at Townhall. It even includes a picture of the happy, evil couple.

The Democrats Cover Up for Rape with Murder

The Democrats want laws (Option 1) that make it possible for these two adults to get away with everything. To keep custody of the rape victim, in the home where she’s being abused. (The quiet abortion and compliant abortionist kept Social Services blind to the situation.) Just shove the kid into the car, willing or not, drag her into the clinic, and scrape her clean. Everybody’s happy, right?

Lame, lax pro-life laws (Option 2) would have the same effect. No help for the visible victim, and death for her unborn child. Indeed, the only reason Gerson Fuentes is being arraigned for rape is the press coverage Joe Biden unwittingly directed toward the story. The victim’s mother ought to face child exploitation and endangerment charges, and lose all parental rights.

Only protective, pro-life laws such as Option 3 or 4 would demand might offer some protection to the victims here. Those are the only kind of laws that decent human beings, who weren’t possessed by demons or willfully blind to them, should ever support.