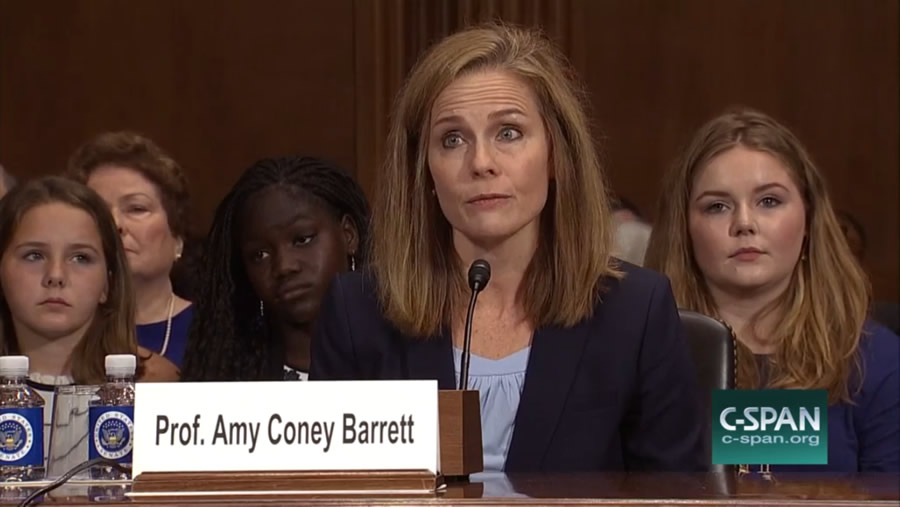 The opening up of a Supreme Court seat on the eve of a close election in a bitterly divided country offers both problems and opportunities. While this SCOTUS seat is important, this election is make or break. The left and its power elites have spent more than three years defying the people’s vote in 2016. A Democrat as mainstream as Michelle Obama threatened voters that if they pick Trump, street violence will continue and get even bloodier.

If you think things cannot possibly get worse, trust me, they can and they will if we don’t make a change in this election. If we have any hope of ending this chaos, we have got to vote for Joe Biden like our lives depend on it. [emphasis added]

No Mafia soldier demanding protection money ever said it better.

The Thelma and Louise Election

In my last column, I suggested that Divine Providence lies behind the timing of this Supreme Court appointment. Maybe God gave us a last chance to hit the brakes on this Thelma and Louise election, just shy of the canyon. But when it comes to last chances, God proposes and man disposes: He leaves us free to blow it.

The decisions President Trump and Republicans in the Senate make in the next two weeks could very well swing the election. They could remind moderate Americans of Democrats’ pro-death extremism. Which includes infanticide, sex-selection abortion, retail sale of baby parts for profit, federal funding for abortions, and other demands most voters reject. Refocusing voters on the shocking subhumanism of the Democrats’ world-view, instead of their mostly effective lies about COVID, could make the difference.

Pro-Life or No Life

On the other hand, if the GOP blows this nomination as it has blown so many before? Then it would be the first shovel full of dirt on the Trump legacy, the event that hands the White House, maybe even the Senate, to a party held hostage by its violent, extremist fringe.

Even Republicans whose hearts are cold enough not to care about unborn babies ought to hope that Trump picks a solidly pro-life jurist. And not some Chamber of Commerce, pro-choice empty pants suit. Not if they want Christians to turn out and stop street-burning Marxists from torching American cities.

An America constantly flooded by new pro-choice voters would likely only protect unborn children in a small and shrinking number of states, until those, too, shifted from red to blue, and our country’s unique culture and system, our gun rights and all our other liberties, were repealed one by one.

We’ve gotten to the point where Christians must say: If you won’t stop slaughter in the womb, you won’t get order in the streets. Or low taxes, a strong defense, or the sane rule of law. We’ve pulled the Republican cart like jackasses for decades now. If we don’t get the carrot soon, you’re on your own.

We need a Supreme Court justice who will follow a basically originalist scheme of interpretation, guided by the natural law that our Founders cited constantly in their writing. The best example on the court today is Justice Clarence Thomas. The best-informed expert on this view of the Constitution is Hadley Arkes. (Please read his detailed defense of this natural law originalism as the truest, most authentic approach.)

On the issues, we need a justice who will look at Roe v. Wade, Doe v. Bolton, and Planned Parenthood v. Casey not as sacrosanct “super-precedents” but America’s answer to the blood-caked Berlin Wall. Someone who’ll vote to “tear down this wall.” Then the issue will return to the 50 states, and the left will have to fight again for territory it long considered pacified — draining its energy from inventing new outrages against human decency. And there’s no principled reason why a future Congress shouldn’t act to declare unborn children legal persons, deserving civil rights protection.

But we need the votes, for that law, and many other good ones, both at the state and federal level. We can’t keep letting mass immigration flood our country with new clients for the welfare state. As I wrote at Human Events:

Even if Roe and the other precedents were overturned, an America constantly flooded by new pro-choice voters would likely only protect unborn children in a small and shrinking number of states, until those, too, shifted from red to blue, and our country’s unique culture and system, our gun rights and all our other liberties, were repealed one by one.

For that reason, any Supreme Court justice would have to respect our immigration laws and the president’s authority to enforce them. She’d have to see it as something meant to serve the best interest of Americans. And not, as leading U.S. bishops insist, a “life issue” where rejecting newcomers is as “intrinsically evil” as aborting kids in the womb.

In the past I was worried about some statements by Amy Coney Barrett. I expressed my concerns in two detailed articles at Human Events magazine. To sum them up, I pointed to a scholarly article Barrett co-wrote while in law school. In it, she noted that Catholic judges in some cases might find a conflict between the plain meaning of the Constitution and their Catholic consciences. Instead of simply following the Constitution (or hoping to amend it), she wrote that those judges might rightly decide to recuse themselves.

Barrett cited both the statements of popes and the positions of the U.S. Conference of Catholic Bishops as authoritative in determining such issues. She even respectfully cited the “Seamless Garment,” a poison pill cooked by leftist bishops in the 1970s to offer political cover to pro-abortion Democrats with Italian or Irish last names.

Natural Law Should Unite Us

Really, there ought to be no such conflicts, since the same natural law tradition that gave birth to the U.S. Constitution also prevailed in the Catholic Church. And at the time Barrett wrote, the only issue where such a clash seemed likely to arise was capital punishment. That’s because Pope John Paul II had departed from the natural law teachings of his own church, and offered a sentimental, utilitarian argument against all capital punishment. It won’t stand the test of time, and will someday be condemned as error by future popes, some scholars promise.

But since Barrett’s article appeared, Pope Francis has vastly widened the areas where the Church’s current party line rejects natural law, in favor of reckless Utopian stances on economics, the environment, immigration, war and peace. The U.S. Catholic bishops have become even more like a Democratic party thinktank, foisting limitless claims on American taxpayers and citizens, debasing the word “pro-life” to include them all, promiscuously.

Pope Francis has aligned the Vatican with Communist China, against the “capitalist West,” and collaborated with open-borders leftist groups funded by George Soros.

In this present context, with this pope and these bishops, any Catholic who deferred to them to the extent of recusing herself would be essentially useless on the court.

Barrett Proved Better Than Her Word

However, I am very happy to say that in several important cases where Barrett ruled after my article appeared, where the Constitution demanded a result that would offend Pope Francis and liberal U.S. bishops, she followed the law. She did not speak of recusing herself. Perhaps she regrets ever mentioning it, back when we had a much saner pope and better bishops.

By not recusing but ruling, Barrett doubtless ruined the day of cardinals like Blaise Cupich of Chicago, who equates the evil of Planned Parenthood’s body-parts business with Americans’ owning guns or deporting illegals. Barrett has ruled well on immigration cases, death penalty cases, and gun rights cases. On each topic, she rightly followed natural law and American jurisprudence, not the ever-leftward-shifting stances of this pope or his bishops.

In light of this, I withdraw my previous questions about her fitness. I hope that if President Trump selects her she is quickly confirmed. Let the Democrats spend the confirmation hearings pouring scorn on women who have children and go to church. On Catholics like those who live in crucial swing states. Even (as some did to Sarah Palin) on women who welcome their Down syndrome infants, instead of aborting them. Let them hurl the “systemic racism” charge at a gifted professional who adopted two Haitian refugee children.

Let them do their worst, and unmask the principalities and powers who are really running their party.