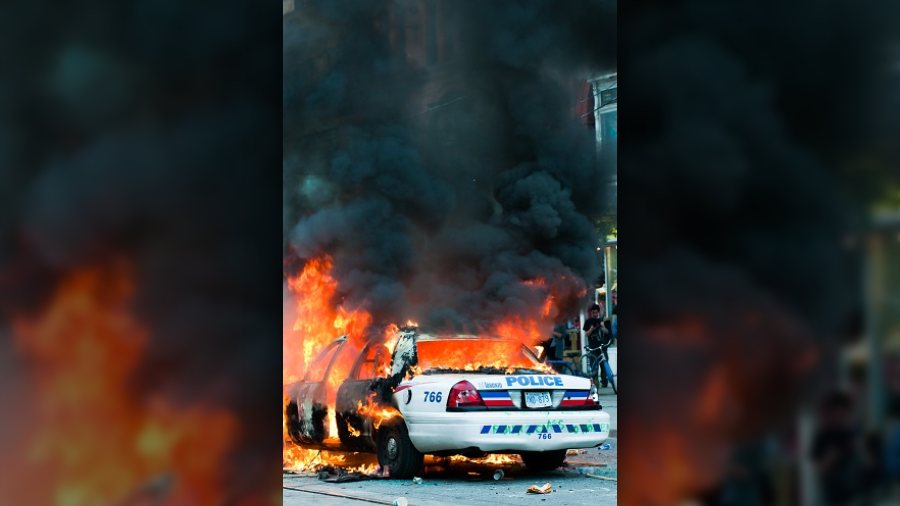 As we look at the results of last week’s elections, one thing is abundantly clear: Americans do not like the radical left.

There may be small factions that make a lot of noise.

There may be extremist ideologies that have cloaked themselves in socially acceptable themes.

But when the rubber meets the road, when the real agenda is exposed, the vast majority of Americans reject the goals of the radical left.

It is true that individuals like Alexandria Ocasio Cortez remain popular. And it is true that there is a battle for the soul of the Democratic party, which continues to push further left.

But it’s also true that the Democrats knew that they needed someone like Joe Biden, perceived to be more moderate, if they were to defeat Trump.

That’s because America, for the most part, tends to lean centrist if not centrist-right.

And that’s why the BLM movement, which began with such fanfare, quickly lost some of its luster when its fangs were exposed.

America Stepped Back from BLM’s Marxism

Naturally, Americans stood up en masse to protest racism. We united together to say, “Where there is unfair and unequal treatment of our Black brothers and sisters, we stand against it.”

But when BLM’s violent, socialist side began to emerge, many Americans stepped back.

As reported by Pew Research September 16, “As racial justice protests have intensified following the shooting of Jacob Blake, public support for the Black Lives Matter movement has declined, according to a new Pew Research Center survey. A majority of U.S. adults (55%) now express at least some support for the movement, down from 67% in June amid nationwide demonstrations sparked by the death of George Floyd. The share who say they strongly support the movement stands at 29%, down from 38% three months ago.”

That’s why the BLM website removed the “What We Believe” page a couple of months back. The more people knew what the organization really stood for, the less support they would have. (To this day, most Americans still don’t know the whole story. The more they do, the less they support it.)

We united by the millions in proclaiming that Black lives really do matter. The same could not be said when it came to supporting a Marxist-based, transgender-activist agenda that wanted to dismantle the nuclear family.

If you want to succeed, then, you best hide or disguise that stuff.

It’s the same with the “defund the police” movement. As a Washington Post reporter tweeted after the elections, referencing a conference call with a Virginia Democratic candidate who narrowly won reelection: “[Abigail] Spanberger on the Dem caucus call: We lost races we shouldn’t have lost.

“Defund police almost cost me my race bc of an attack ad.

“Don’t say socialism ever again. Need to get back to basics.

Biden Tried Shying Away from Radical Ideas of His Supporters

That’s also why Joe Biden could not aggressively and openly support a Green New Deal. Not if he hoped to win. As The Hill announced on October 16, “Biden distances himself from Green New Deal during town hall.”

That would also suggest that, should Biden be proven to be our duly elected president, to the extent he tries to push through a radical leftist agenda, to that extent he will lose political clout (and, likely, seats in the House and Senate).

It’s true that BLM co-founder Patrice Cullors has told Biden that, “We want something for our vote.”

She wrote, “Without the resounding support of Black people, we would be saddled with a very different electoral outcome. In short, Black people won this election.”

And it’s certainly true that Black voters helped turned the tide for the Biden campaign when he seemed dead in the water before the South Carolina primaries.

But I do not believe that a large majority of Blacks who voted for Biden were also voting for socialism or for transgender activism or for disrupting the nuclear family. (Note also that Trump did increase his support among Black voters by 4 percent from 2016.)

Again, best to hide that stuff if you want to make headway.

Yet, the Soul of America is in Jeopardy

But that doesn’t mean that the soul of America is not in jeopardy. It most certainly is.

That’s because it only takes a small, vocal, even violent minority to change the direction of a nation. They can do it when their ideas are embraced by the cultural elites in the universities and the media and the world of finance, after which those ideas become mainstreamed.

This is exactly what happened in the counterculture revolution of the 1960s. Small groups of radicals, embraced and celebrated by the leaders of higher education and by the cultural influencers, became mainstreamed and championed.

Violent leaders with criminal backgrounds became heroes, including men like Huey Newton of the Black Panthers.

As noted by Jonathan Leaf in The Politically Incorrect Guide to the Sixties, “Having become addicted to cocaine, in 1974 Newton was widely believed to have butchered a seventeen-year-old prostitute named Kathleen Smith for allegedly insulting him. Facing murder charges, he fled to Cuba. While there, in 1977 Newton met and befriended Jim Jones, who a year later engineered the mass suicide of nearly one thousand of his cult followers in the Jonestown compound in Guyana. Returning to America in 1977 and beating the rap for Smith’s murder, Newton was convicted in 1989 of embezzling funds from a Panther-organized school.”

Newton is lionized to this day.

The mass-murdering Chairman Mao became a fountain of wisdom and an icon of idealism, his Little Red Book a prized possession.

Che Guevara, who reportedly said that killing “made his “nostrils dilate while savoring the acrid odor of gunpowder and blood,” became equated with Jesus.

And individuals as radical as Weather Underground leaders Bill Ayers and Bernardine Dohrn became respected (and influential) university professors. (And guides for one Barack Obama.)

The lesson, then, is simple: while a majority of Americans will continue to reject the unvarnished agenda of the radical left, it will make inroads in many other ways.

We must expose it ideologically as well as resist it politically.

Of course, most Americans also resist the agenda of the radical right, but that agenda tends not to make its way through society via our schools and the cultural elitists. The radical right agenda must be rejected on other fronts.

As for the radical left, two words suffice: stay vigilant.