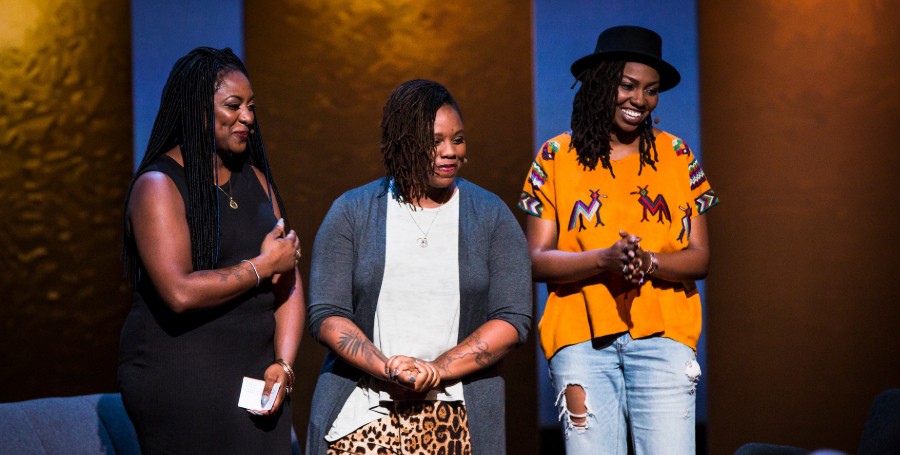 Dating back to 2016, I have been urging Christian conservatives and other people of conscience to distinguish between the important affirmation that black lives do matter and the BLM movement.

The statement that “black lives matter” should be shouted loudly and clearly. Since through much of our history, black Americans have felt that their lives did not matter to white Americans.

As for the BLM movement, it should be exposed for what it is. As I tweeted on July 6:

Here’s what we know about the BLM movement, especially when we dig a little deeper into their “What We Believe” statement.

When you start to connect the dots, you’ll understand why I described BLM as “dangerous” and “anti-Christian.” In fact, at the end of this article, I’ll connect the BLM movement with the J word — as in Jezebel. (Do I have your attention?)

The first two identify as queer and the third as “a transnational feminist.”

Speaking of Cullors, a website celebrating “lesbians who tech” states that “When Patrisse was 16-years-old she came out as queer and moved out of her home in the Valley.”

Being queer is as much of an issue for the movement as being black.

The official BLM site describes Garza as a “queer Black woman.” She states that “we must view this epidemic through a lens of race, gender, sexual orientation, and gender identity.”

That’s why a June 21, 2020 article on ABC News declared that “From the start, the founders of Black Lives Matter have always put LGBTQ voices at the center of the conversation. The movement was founded by three Black women, Alicia Garza, Patrisse Cullors and Opal Tometi, two of whom identify as queer.”

On a certain level, reading through the official BLM statement, being queer is as much of an issue for the movement as being black.

Accordingly, there are multiple references to “trans,” as highlighted here: “We make space for transgender brothers and sisters to participate and lead. We are self-reflexive and do the work required to dismantle cisgender privilege and uplift Black trans folk, especially Black trans women who continue to be disproportionately impacted by trans-antagonistic violence.”

Even more forthrightly, the statement reads, “We foster a queer‐affirming network. When we gather, we do so with the intention of freeing ourselves from the tight grip of heteronormative thinking, or rather, the belief that all in the world are heterosexual (unless s/he or they disclose otherwise).”

Thus, the only references to heterosexuality are negative, as in “cisgender privilege” and “heteronormative thinking,” meaning the assumption that heterosexuality is the norm.

So, BLM is not just fighting against white privilege but also heterosexual privilege. Make no mistake about it.

That’s why the statement also goes out of its way to include people of “actual or perceived sexual identity, gender identity, gender expression.” The leaders have made themselves abundantly clear.

But there’s more, and this has often been missed in commentary on BLM beliefs.

There are references to “mothers” and “parents” in their statement. But not one single reference to fathers. Not one. (Contrast this with the multiple references to queer and trans and gender identity, etc.)

Mentions of “men” or the idea of a male-led household are only found in totally negative contexts.

Specifically, “We build a space that affirms Black women and is free from sexism, misogyny, and environments in which men are centered” (my emphasis). Oh, those terrible, evil men.

And this: “We make our spaces family-friendly and enable parents to fully participate with their children. We dismantle the patriarchal practice that requires mothers to work ‘double shifts’ so that they can mother in private even as they participate in public justice work” (again, my emphasis).

Yes, that oppressive, husband-wife, male-female union. That outdated, outmoded patriarchal dinosaur. It must be dismantled. (And note the assumption that if something is “patriarchal” it is unfair to women. A truly fair relationship would have the husband home with the kids while the wife is out doing “public justice work.”)

This is the language of radical feminism in unabashed, undisguised form. This too is part of the queer, trans-affirming spirit.

The third founder, Opal Tometi, is also described as “a student of liberation theology.” And there is now the widely circulated quote from Cullors. Apparently she and Garza “are trained Marxists.”

What about the connection between liberation theology and Marxism, especially in this context? Prof. Anthony Bradley, himself black, has pointed out that “Black Liberation Is Marxist Liberation.”

There is now the widely circulated quote from Cullors that she and Garza “are trained Marxists.”

So, without question, the official BLM movement is Marxist-based, queer-affirming, trans-activist, traditional-marriage degrading, radical-feminist promoting and more. In a certain sense, it is fatherless as well.

That’s why I said that “the BLM organization is dangerous, anti-Christian, and should be avoided.”

Now, let’s also remember that Cullors is on record saying that their goal is to remove Trump from office. She said, “Trump not only needs to not be in office in November, but he should resign now. Trump needs to be out of office. He is not fit for office. And so, what we are going to push for is a move to get Trump out.”

And this leads me to one last important point. When you connect all the dots, the spirit of the official BLM movement is downright Jezebelic. It is thus in direct conflict with the Alpha Male Trump. For more on this, watch here.