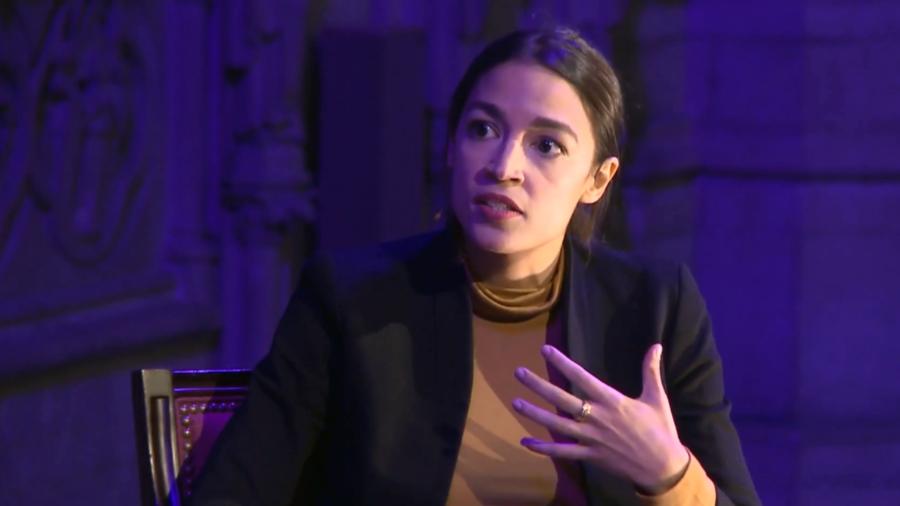 Just last week, Congressman Alexandria Ocasio Cortez endorsed the mob hounding of a Supreme Court Justice, Brett Kavanaugh, a mere two weeks after he was subject to an assassination attempt. She sneered at Kavanaugh being driven out the back door of a restaurant by an angry mob, then posted this rationalization:

So, Xandy, You Said You Wanted Us to Make Our Opponents “Uncomfortable” …

This week, the brilliant (if sometimes profane) guerrilla conservative activist Alex Stein decided to see how Rep. Cortez likes the new reality she has called for: public confrontation with political enemies on the street.

Stein is a smart political analyst, but also a gifted comedian. Check out his Youtube channel to see him pranking city council meetings all across Texas, but also in humorless California and Stalinist New York City. He shows up dressed as a pimp, rapping in “praise” of abortion. Or he puts on terrible drag, and announces he’s now a “transwoman.” Or he goes to a “Pride” march and asks the attending zealots “How many genders are there? How many can have a baby?”

Stein isn’t just having fun. He’s forcefeeding our elites just the tiniest dose of their own medicine, and you can tell they don’t like the taste. Stein’s pro-life, conservative antics even got the attention of Tucker Carlson, who has featured him more than once on his show.

About Those Street Confrontations …

So after Cortez called for mobs to harass Brett Kavanaugh, Stein decided to see how Cortez enjoyed street theater herself. He waited for her to appear on a D.C. street, then loudly (and, admittedly, somewhat crassly) praised her appearance as “sexy.” He used the kind of language the left does all the time. He ran a play from AOC’s own playbook. She wasn’t amused. She marched over to Stein and threatened to assault him — then went on Twitter to whine about her victimhood. (For good measure, she apparently pulled strings and got Stein’s D.C. comedy show cancelled by its venue.)

Here is a video he posted of the incident. I was actually walking over to deck him because if no one will protect us then I’ll do it myself but I needed to catch a vote more than a case today pic.twitter.com/RdwCNBDIBb

Alex Stein is acting as every good American should. Especially as serious Christians should. We should mock the priests of Baal at every opportunity. We should show the evildoers inside our Oligarchy that the consequences of their lawless and cruel behavior won’t be pretty. It’s good for America, and even good for these bad people’s souls.

Our Elites in the Hacienda

We’re in the midst of a revolution. The West’s ruling elites ceased to believe in our Constitution some years ago. As of 2016, they ceased to even pretend to. The corporations, media, academic institutions and many of our churches have tacitly agreed to “fundamentally transform” (in Obama’s words) the West as a whole and America in particular.

We can see the shape of their brave new Utopia clearly. We can see that it’s not new at all. Most of our unhappy ancestors throughout history survived under such regimes. Our oligarchs seek to destroy our system of broadly distributed wealth and democratic power-sharing, which spread widely after 1776. Instead, they wish to build a global Hacienda Society, where the top 1-2% controls almost all the wealth, wields arbitrary power, and doles out political rights to its supporters alone. The same as under the Pharaohs in ancient Egypt, or the conquistadors in Mexico.

The Rest of Us in the Favela

Those of us who resist or refuse, or aren’t deemed worthy of joining the elites, will dwell out in the Favela: the chaotic, impoverished, Mad Max hellscape we can already see in the streets of major blue cities. There rights aren’t protected, prosperity’s unattainable, and hapless subjects scramble for handouts from the government. In the past, we might have thought of places like Mexico City, Caracas, or Mogadishu. Now we must add Los Angeles, San Francisco, Chicago, and Baltimore. The smell of men’s despair in such cities is only covered by the reek of human feces.

The method the oligarchs are using is also a “classic.” It’s what the Nazi brownshirts used to seize power in Germany: Anarcho-Tyranny. As I’ve explained here before, that means “Anarchy for me” and “Tyranny for thee.” When Nazi brownshirts (or Antifa thugs) riot in a city, attacking their political enemies, the sympathetic authorities don’t prosecute the aggressors. But if the victims attempt to defend themselves, police swoop in and punish them (the Jews and socialists, or Kyle Rittenhouse and the January 6 demonstrators) to the fullest extent of the law.

Think about this. Our Congress is holding purge trials right now of those involved in letting non-violent demonstrators take selfies in the U.S. Capitol without permission. But the White House won’t condemn organized attempts to intimidate and harass Supreme Court justices — which have included an assassination attempt.

What’s the Christian response to this level of evil? Of course it’s not to collaborate with it, as NeverTrumpers are doing, with an eye toward the hope of living in the Hacienda’s guardhouse. The David Frenches and Russell Moores of this world are not even Pharisees at this point but Sadducees. They shout “We have no king but Caesar!” And we believe them. As we believe that Pope Francis prefers the Chinese Communist Party to the American pro-life movement.

But we must do much, much better. It’s un-Christian also to stay silent, to play along, to collude in the pretense that our enemies still believe in the rule of law. They don’t. We know it. To say or act otherwise is to lie in words or in deeds. We aren’t asked — in fact we don’t have the right — to turn the other cheek on behalf of other people, either our neighbors or our descendants. It’s our Christian duty to fight.

Fight Back and Win. It’s the Christian Thing to Do

If you’re in a boxing match, and your opponent starts kicking you, maybe pulls out a knife, it’s wrong to go on playing by the Marquess of Queensbury rules. There isn’t some referee who will give you the match on points. You realize you’re in a street fight, and you act accordingly. No “norms” or “institutions” or pretty words matter at that point. You’re only limited by the moral law, so you must avoid doing what is intrinsically evil. All other bets are off.

Do unto others as you would have them do unto you. If you were engaged in an evil conspiracy to strip innocent people of their rights, you should want someone to intervene and stop you — to scare you if need be off the slippery, Gadarene slope down to Hell.

That’s why Alex Stein’s prank on Rep. Cortez was a patriotic, even virtuous gesture. More of this, please.