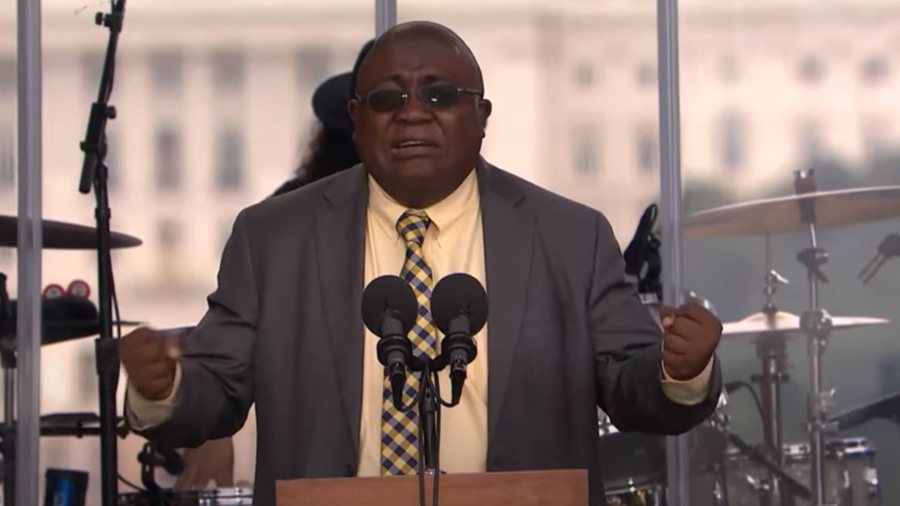 Pastor Oluwasayo Ajiboye, founder of Africa Returns and the president of Mission Africa International, prayed for God to heal Africa at The Return Sept. 26, 2020 on the National Mall in Washington D.C.

By Joseph D'Hippolito Published on September 9, 2021 •

About 900 years before Jesus was born, Judah faced a military threat from three nations that formed an alliance. King Jehoshaphat, the Judeans’ ruler, ordered his subjects to fast while he went to Jerusalem to pray in the Temple.

“We can do nothing to stop this huge army from attacking us,” Jehoshaphat prayed. “We don’t know what to do, so we are asking for Your help” (2 Chronicles 20:12).

This Friday and Saturday, Christians in Africa who face persecution and poverty will cry out to God in a similar fashion.

“Africa Returns” is a two-day assembly in Nigeria for concentrated prayer and repentance. The event follows a similar gathering in Washington, D.C., “The Return.” In conjunction with Franklin Graham’s Prayer March, more than 50,000 Christians gathered in the National Mall last September, and many millions worldwide watched online.

The Potential for Revival

Pastor Oluwasayo Ajiboye, the founder of “Africa Returns” and the president of Mission Africa International, believes this weekend could provide a turning point for the continent.

“We believe that all the things that have been happening in Africa — the violence, the confusion, the leadership problems, the injustice, the wars, the famines — that when we return to God, God will have an answer for these things,” Ajiboye said, “and that the leadership problems that look intractable, when we return to God, like the children of Israel, God will bring a solution.”

Though the main assembly will take place in Nigeria, organizers plan to conduct similar meetings at the same time in 11 other African countries. They are Côte d’Ivoire, the Democratic Republic of the Congo, Ethiopia, Ghana, Kenya, Liberia, Malawi, Mozambique, South Africa, Tanzania and Uganda. The political and economic leaders of all 12 nations have been invited.

Meanwhile, two ministries in the United States will hold their own prayer assemblies Saturday, both in person and online. The Romans 9:11 Project seeks reconciliation with Jews and other Christians.

Another ministry, Redigging the Wells of Revival, seeks to rekindle the spirit that fueled the Pentecostal movement early in the 20th century. The ministry will meet in Los Angeles at Azusa Street, the site where the modern Pentecostal explosion began.

Rev. Kevin Jessip, who founded both The Return International and the Global Strategic Alliance, believes the world’s population will see unprecedented examples of divine power.

“God is about to do something new and glorious,” Jessip said. “This new thing is beyond revival, beyond an awakening. It is a work of God that He alone initiates.”

What exactly does Jessip mean?

“For His own Name’s sake, God is going to do two mighty works,” he said. “First, He’s going to purge the nations and His church with awesome redemptive judgments. Second, God is going to glorify His holy Name with a great intervention of mercy. In the throes of judgments being fulfilled, God is going to save the day by a supernatural ‘turning’ of a remnant back to Himself.

“What He did for Israel when they were being judged He will do again in the days ahead. Those of us who have been seeking the Lord fervently in our prayer closets are looking forward to the great and glorious redemptive work He is going to do for His Name’s sake.”

How You Can Participate

You can view Africa Returns online in three segments. The first starts at 5 a.m. and ends at 8 a.m. The second lasts from 10 a.m. to 1 p.m., and the third begins at 5 p.m. and lasts until midnight (all times Eastern).

You can watch online here or here. You also can download the event’s prayer sheet here.

On Saturday, The Romans 9:11 Project will stream from 11:59 a.m. to 2 p.m. Eastern time. Redigging the Wells for Revival will launch video from noon to 9 p.m. Eastern time on its website and GOD TV, a cable channel.

For Jessip, prayer, fasting and intercession are pivotal for Christians in increasingly troubling times.

“As a dark-world Antichrist system seems to be rising as a one-world government, attempting to steal the sovereignty of nations,” Jessip said, “Joel 2:15-16 tell us what we must do: ‘Blow the trumpet in Zion; consecrate a fast; call a solemn assembly; gather the people.'”