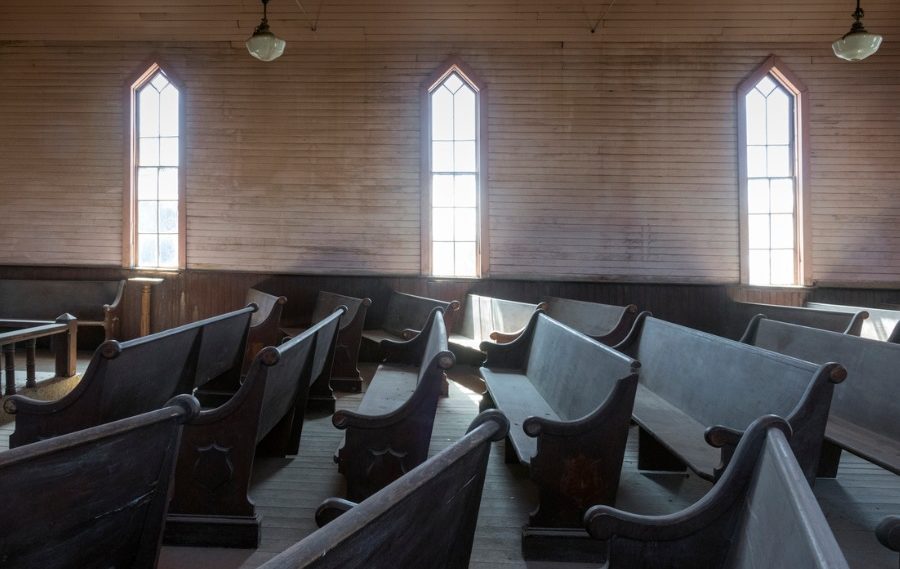 Interior of the Methodist Church in Bodie, California, a ghost town maintained as the Bodie State Historic Park. It is also recognized as the Bodie Historic District by the US Department of the Interior. It is maintained in a state of “arrested decay” by the nonprofit Bodie Foundation.

If the reports are true, then “a tentative plan” has been put in place “to split the [Methodist] church over differences on same-sex marriage and the inclusion of gay clergy.”

In 2019, “The division, which has been brewing for years, came to an impasse last May when delegates in St. Louis voted 438-384 to ban gay marriage and the inclusion of gay clergy.

“A majority of U.S.-based churches opposed the ‘Traditional Plan’ but were outvoted by conservatives in the U.S., Africa and the Philippines.”

Assuming that this split actually takes place, what will happen to these two branches, one conservative and the other liberal?

The answer is easy, based on history and common spiritual sense.

History says that the conservative branch will grow and the liberal branch will diminish.

The Traditional Branch Will Blossom

This has been the pattern for decades, as I documented in 2015, citing a major study dating back to 1972 written by Dean M. Kelley: Why Conservative Churches are Growing: A Study in Sociology of Religion.

As Kelly wrote almost 50 years ago, “Amid the current neglect and hostility toward organized religion in general, the conservative churches, holding to seemingly outmoded theology and making strict demands on their members, have equaled or surpassed in growth the early percentage increases of the nation’s population.”

As for the liberal churches, he noted, “The mainline denominations [which were becoming increasingly liberal] will continue to exist on a diminishing scale for decades, perhaps for centuries, and will continue to supply some people with a dilute and undemanding form of meaning, which may be all they want.”

For a host of reasons, this pattern will continue with the two Methodist branches.

The conservative branch, preaching the Scriptures without apology, adhering to timeless moral values, and offering adherents a true encounter with the risen Lord, will gain members.

The liberal branch, reinterpreting the Scriptures and apologizing for the Bible and redefining morality, will lose members.

Writing in the Federalist in August, 2014, Alexander Griswold noted “Every major American church that has taken steps towards liberalization on sexual issues has seen a steep decline in membership.” (His article was titled, “How to Shrink Your Church in One Easy Step.”)

More broadly, this is confirmed by data just released by the Center for the Study of Global Christianity.

Roughly 120 years ago, the Center claims that there were about 80 million Evangelicals and less than 1 million Pentecostals/Charismatics worldwide. (These terms might be anachronistic for the year 1900, but they are being used to trace particular groups over the last 120 years. And, of course, there is overlap between the two groups, which are both very conservative theologically.)

Today, those numbers, globally, are put at 354 million Evangelicals and 694 million Pentecostals/Charismatics. Projection for 2050 puts these groups at 581 million and 1 billion, 89 million respectively.

This is the growth-curve of Bible-based Christianity, especially one that emphasizes the ongoing ministry of the Spirit.

No surprise in the least.

To be sure, if the conservative congregations are hypocritical, dead, and legalistic, they too will dwindle away. But if the preach Jesus, welcome the Spirit, exalt the Word, and reach out to their community, they will thrive.

And this leads us to the subject of spiritual common sense.

Specifically, they will question some of the fundamental tenets of the faith (including the inspiration of the Scriptures, the virgin birth and the resurrection, the second coming, and more. Much of this is happening already). They will become more universalistic (meaning, salvation is not exclusively through Jesus). And they will move further and further away from biblical morality.

Watch and see. (For a recent, shocking example from Sweden, see here.)

In contrast, the conservative churches will remain steady, since they are not reacting. They are simply maintaining their historic stance, believing what John Wesley, the founder of the Methodists believed, and affirming what Jesus and Paul taught.

As one African Methodist leader stated in early 2019, “I’m happy to go back to old ladies and old men in villages who received the Bible from missionaries and let them know that the Bible hasn’t changed.”

In the end, while it is sad to see division and separation, some of it is necessary and even for the best.

When it comes to the Methodist Church, as the years unfold, it will be not be seen so much as a separation between fellow-Christians.

Instead, it will be seen as a separation between the wheat and the weeds or the sheep and the goats, to use the imagery of Jesus.