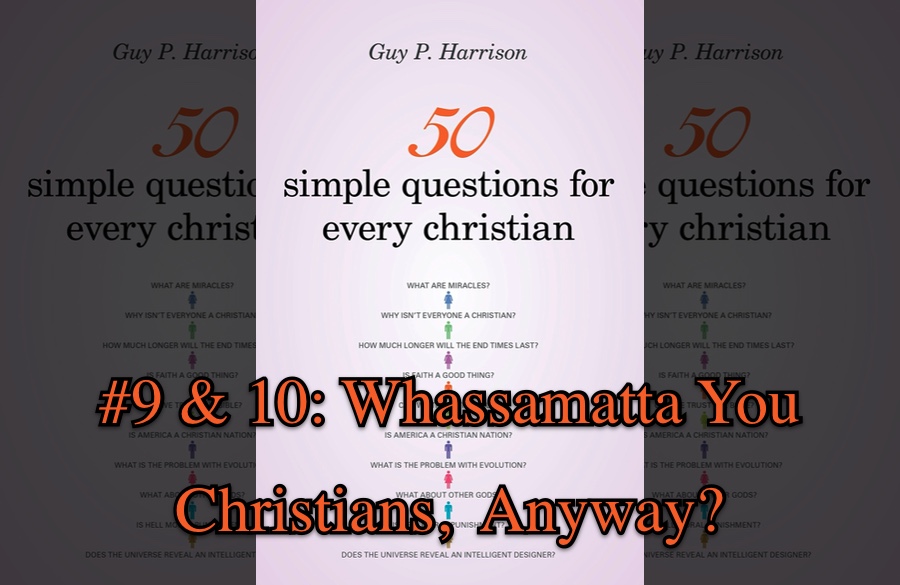 No, my title here doesn’t quote one of Guy Harrison’s chapter titles. Up until now in this series I’ve been taking one of his “50 questions” per week. This time I’m covering two of them: “Have you read the Bible?” and “Why do some Christians do bad things?” Mash them together and it comes out a lot like, “Whassamatta you Christians? What’s wrong with you?”

His other question focus mostly on Christianity. These two focus on what’s wrong with Christians. I’ve got a question or two for him in return.

First, does he really intend to sound so much like an evangelical preacher? In his chapter on reading the Bible, I mean. He wants us to do a lot more of it. And I agree. For years I’ve been urging Christians to study up. Too many believers don’t know the Bible. It weakens their faith, and it weakens Christianity’s overall witness.

It’s touching, the way Harrison cares for our spiritual strength. Is that what he wants? Or is it a pseudo-friendly mask for, “Have you even noticed what a terrible book your Bible is?” It sure looks like it, when he says, “Many Christians are surprised to hear about the murder of babies, the God-approved kidnapping and rape of female virgins in pillaged cities, the tips on how to be a good slave and an even better slave owner … the execution of homosexuals, and so on.”

Christian scholarship through the centuries has been neither as lazy nor as disinterested in moral questions as Harrison implies we must be today.

He tries to act understanding: “There may be reasonable arguments for many of these excerpts regarding context or interpretation,” but the whole rest of his book argues he doesn’t really mean this. (He claims that God is “violent” in the Bible, for example.)

In fact there are good explanations, whether most Christians know them or not. Christian scholarship through the centuries has been neither as lazy nor as disinterested in moral questions as Harrison implies we must be today.

For the most part, though, this chapter is about what lazy Bible-readers we Christians are. “Bad, bad Christians,” says the atheist, shaking his finger at us. “You really ought to read your Bible more!”

It’s even less subtle in his chapter on, “Why do some Christians do bad things in the sight of Jesus?”

How is it that so many Christians are able to do bad things when they supposedly believe that a judgmental god [sic] is close to them at all times and sees everything they do? … Are misbehaving Christians so impulsive that they just can’t stop themselves — even though they know God is present and staring right at them? Or could it be that they are less confident in the existence of an omniscient or omnipresent god [sic] than they let on?

My first question to Harrison on this chapter: Where did you ever read that following Jesus meant instant perfection?

What’s the term for people who act as if they’ve read the Bible, but don’t know such familiar things themselves?

But he’s not just talking about ordinary Christian mistakes. He’s talking about the big ones. He wants to know whether we’d say some of these really bad Christians aren’t really Christians after all. That answer’s easy: Some are, some aren’t. Some may be struggling with their sin, others are definitely not even in the faith.

Whoo-wee, but that’s wrong. Actually, professing belief in Jesus as “a god,” as if he were one god among many, defines a non-Christian.

Does He Know What He’s Talking About?

So I have to ask him another question. “Have you read the Bible?” In his chapter on Christians not reading the Bible, he comes through as implying that he has. Funny thing, though: He only refers to passages that show up all the time as atheist talking points. If he’d actually read it, he should have known that Jesus gave a not-terribly-obscure message we call the Sermon on the Mount. In it he warns of false teachers, saying, “You will know them by their fruits” (Matt. 7:20). He goes on to tell us that not everyone who claims to be a Christian is real (Matthew 7:21-23). The point gets reinforced throughout the book of James.

Has Harrison read any of the passages in which the Bible expects us to keep on being imperfect, but also tells us God has the answer? 1 John 1:8-2:3, for example?

If we say we have no sin, we deceive ourselves, and the truth is not in us. If we confess our sins, he is faithful and just to forgive us our sins and to cleanse us from all unrighteousness. If we say we have not sinned, we make him a liar, and his word is not in us. My little children, I am writing these things to you so that you may not sin. But if anyone does sin, we have an advocate with the Father, Jesus Christ the righteous. He is the propitiation for our sins, and not for ours only but also for the sins of the whole world.

Anyone who’s read even a little of the Bible, the most familiar passages in the New Testament, know about this.

Harrison thinks people who believe in Christ should act like it. I agree, but I know we won’t be perfect. We rely on the grace of Christ at all times. And I know that not everyone who claims to believe is truly a Christian.

I have a final question for Harrison, though. What’s the term for people who act as if they’ve read the Bible, but don’t know such familiar things themselves? I’m going to suggest one: Pretenders.