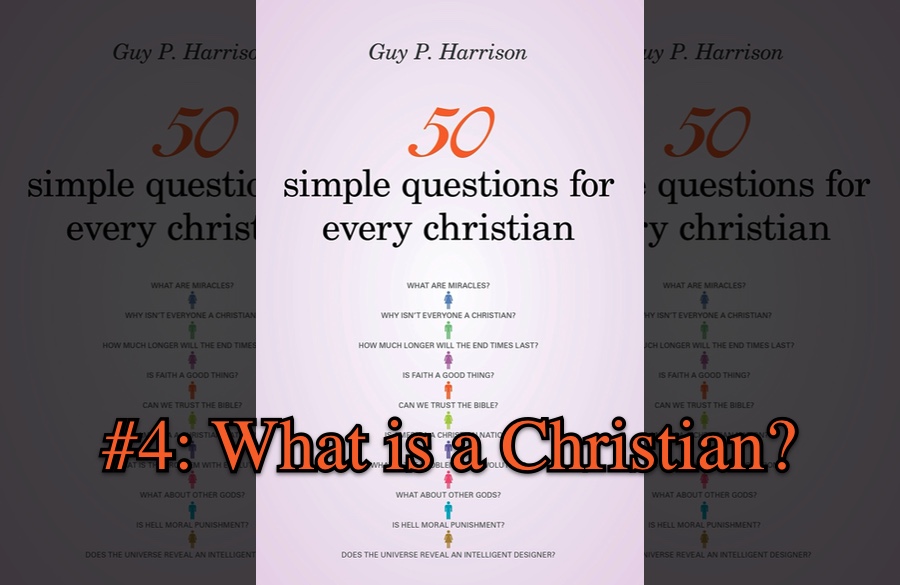 Guy Harrison is confused. Understandably so. As an atheist he wants to know what a Christian is, and there are a whole lot of different answers out there. His own best stab at an answer comes in two forms: “Those who say they are Christian are Christian;” and, “One who believes in and worships a god named Jesus — full stop.”

Let’s give him credit for asking, and for asking fairly, which he did. I get his confusion, considering the “41,000 versions” of Christianity out there, as he called the thousands of different denominations. I can even see how he’d say it raises questions about Christianity’s credibility:

If the Bible was inspired by God and was meant to instruct humankind, then why can’t Christians at least, if not the entire world, agree on it? … Why is there so much conflict within Christianity about true revelations versus false revelations, true prophets versus false prophets?

Can we help clear the confusion? We have to start by owning the tough reality: people really do disagree on what it means to be a Christian. Not all of that counts against the truth of the faith, though. Jesus and the apostles told us in advance that there’d be false prophets, seeking to lead God’s people astray. Disagreement over the gospel isn’t disproof, then; in fact, some of it actually confirms predictions made from the beginning.

”Those Who Say They Are Christian”?

That doesn’t answer Harrison’s question yet, though. Could it be as simple as he put it, saying, “Those who say they are Christian are Christian”? No, it can’t; not if Jesus has anything to say about it. He warned us that there would be some who’d show in the final judgment claiming to have been His followers, whom He would cast aside, saying, “I never knew you.” (Matthew 7:21-23)

They could say they were Christian all they wanted, but words alone aren’t enough. There’s an internal and external reality to being a Christian, and they both need to be in alignment.

Not Just “a god named Jesus”

So then, what about Harrison’s second answer, “one who believes in and worships a god named Jesus”? I’d say it’s closer, but still nowhere near close enough. It’s a good answer if you define the major terms carefully enough: “Worship,” “God,” and “Jesus.” Otherwise you could end up preaching a false gospel in spite of accurate-looking words.

Take the name “Jesus,” for example. Names don’t mean much until they’re attached to the right person. You could look Tom Gilson on the web, and think you’ve found me as an arena football player, a deceased actor (murdered by his wife!), or the one that really freaks me out, an Irish Elvis impersonator. Having the same name doesn’t make us the same Tom Gilson. Likewise having the name “Jesus” doesn’t make any “god” the same God whom real Christians actually worship.

A “Christian” Religion That Isn’t

Anyone can make a god and call it Jesus. One major religion has actually done that: They’ve invented a whole new Jesus. Their “Jesus” is a created being in contrast to the One who is taught in John 1, through Whom all things were created. Their “Jesus” has a brother named Lucifer. Although he’s the son of God, according to this religion, his father’s identity is an invention, too, for this “father” has a body and bones, in fact he was once a mortal living on earth.

That religion is Mormonism, the “Church of Jesus Christ of Latter-Day Saints.” It’s not Christianity, even though it bears and uses the name “Jesus Christ.” To say that their “Jesus” is the same Jesus worshiped by the Church since the beginning is to do violence not only to Christianity but to language itself. If words, including names, don’t have meanings that matter, why bother using them?

Mormons say they worship a “god” named “Jesus,” but those words have such novel and iconoclastic meanings, their religion can’t be considered Christian.

So What Is a Christian?

So Harrison’s answers don’t work. Is there one that does? Ask ten Christians to tell you, “What is a Christian?” and you’ll get ten answers.

One may say that a Christian is someone who’s in a living relationship with God through Jesus Christ. That’s true. It’s not complete, but it’s a good pointer to the whole truth.

Another may tell you a Christian is someone who believes Jesus Christ lived as taught in the Scriptures, died for our sins (including his or her own sins), and rose again in power, defeating death. That’s another true and good pointer.

The next Christian you ask may say, “Just look at the Apostles’ Creed. A Christian is one who truly and sincerely believes what it says.” Others would want to include the Nicene and (lesser-known yet important) Chalcedonian creeds.

Keep going and you’ll keep getting different answers, which ought not bother us a bit as long as they all point in similar directions. There’s no reason to expect the answer to be short and simple, over and done in just a moment. (Why does Harrison think these are “simple questions”?)

As you continue asking, you’ll find there’s substantial agreement on many aspects of what it means to be a Christian. This core of common belief is what C. S. Lewis so helpfully put forth as “Mere Christianity” in his book of that name. The label was coined by Richard Baxter (1615-1691), who wrote (and I translate into modern usage),

I am a Christian, a Mere Christian, of no other Religion. The Church that I am of is the Christian Church, which has been visible wherever the Christian Religion and Church have been visible. But must you know what Sect or Party I am of? I am against all Sects and dividing Parties.”

Still, though, aren’t there an awful a lot of “Sects and dividing Parties”? Sure.

In some cases their disagreements can be lifted up, not put down, as the glory of human diversity. The Bible never says there’s just one way to worship have fellowship. We’re supposed to be different; God meant it that way.

Some of the differences have to do with “non-essential” doctrines — not that they’re unimportant, but that you could hold various views on them and still be counted as a Christian. Examples include beliefs about baptism, the end times, or predestination, the Church’s relation to Israel.

Granted, that’s more a Protestant way of looking at it than Catholic. The divide marked out by the Reformation is admittedly deep. (The same goes for the Great Schism of 1054, in which the Eastern and Western Churches went separate ways.)

Here at The Stream we have both Protestants and Catholics. The other day I was talking with one of my colleagues here, my friend John Zmirak, about how profoundly we disagree on some things: the place and meaning of the Eucharist (or Communion), the role of Mary and the saints, the meaning and authority of Church tradition and of the pope.

So be it. We’re friends, and we call each other brothers and sisters in Christ, because we know we all love and follow Jesus Christ, and we’re all “Mere Christians.”

So Is That the Answer?

So in case it isn’t clear enough already, that’s how I’d answer Mr. Harrison’s question, “What is a Christian?” It’s someone who loves and follows the Lord, and whose beliefs fit in the category of “Mere Christian.”

Not everyone will agree with me, but I think there’s some authority behind the answer, found in the Church’s earliest creeds. For an atheist who wants to understand the faith, it’s at least a good place to start. As for believers? The best answer I can give is, “Worry less about who else is a Christian, and worry more about following Christ yourself!”