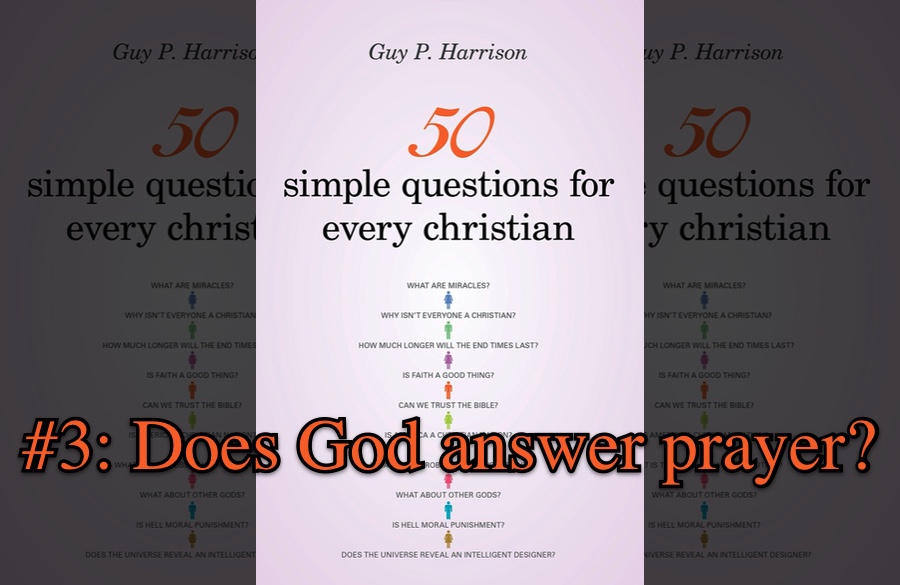 Our atheist friend and author Guy P. Harrison wants to know, “Does God answer prayer?” It’s a great question, and we’d better not rush to simple answers. It isn’t just atheists who have questions. Even Christians who believe the answer is “Yes” have to contend with problems here.

Consider Psalm 89, where the psalmist exults in the glories of God’s covenant with his people (verses 1-37), then stuns the reader with his complaint (38-46),

But now you have cast off and rejected; you are full of wrath against your anointed. You have renounced the covenant with your servant; you have defiled his crown in the dust. … How long, O LORD? Will you hide yourself forever? How long will your wrath burn like fire?”

There are prayers here that God has not answered, or not at all obviously, anyway.

Students of Israel’s history know God had a good purpose in mind: The nation was desperately idolatrous, and it took the exile into Babylon to cure them of it. It worked, by the way. We’re not usually privileged to see all that. Often it’s easy to wonder whether God answers prayer at all.

How Do You Know a Prayer Answer When You See One?

And how would we even know it if he did? Atheist “MarlCarx” has commented on another Stream thread that it’s not necessarily a prayer answer if a patient with severe epilepsy is instantaneously and permanently healed during prayer. People do get over epilepsy, he says. Coincidences happen, and (as Harrison says), confirmation bias can lead us to wrong conclusions. So how do we know it didn’t happen naturally? Isn’t it likely we’re wrong?

Yes, it’s likely we’re wrong sometimes. I pray to find my lost keys. They show up. Should we really call that a prayer answer, when it’s perfectly likely we’d have found them without praying? How can we differentiate a real prayer answer from, “It would have happened anyway?”

What About the Mother’s “Unanswered Prayer”?

We can’t do it by Harrison’s “greatest test of all,” the mother’s prayer for her dying baby. He thinks “a god who ignores those prayers has no business answering any others.” Oh, the hubris! The idea that Harrison knows what’s best for all reality! That human failings should never have human consequences!

God didn’t design the world that way, and be thankful He didn’t. It would be a world in which God undid everything for us; where human decisions didn’t matter. That’s part of the lesson of the Fall: That we get out of reality what we put into it. Who would want it any other way?

Atheists who think they’re smarter than God show just how shallow and uninformed their thinking is.

And yes, since you’re undoubtedly asking, the very young may suffer consequences for which they are not personally responsible. It must be that way. Imagine if it weren’t. Imagine a world where every mother’s prayer for every child was always answered. Every child is perfectly healthy. There are no birth defects, no genetic diseases (in our age when we know to pray about such things). Every child is perfectly good to every other child, until they aren’t — maybe at age 6, or 12, or 18.

But then the consequences fall on them like a landslide. The pain; the loss; the sin, the harm, the grief! And the mother prays again, since it’s so awful, and they’ve only begun to do something wrong, and they can hardly deserve what they’re suffering.

There’s No Better Way Out of It

Do you see how even in that world, Harrison would have almost exactly the same complaint to offer about God “not answering” the mother’s prayer? What kind of world would he build, where he wouldn’t eventually run into exactly the same problem?

Would he build the world so that no child is hurt until he or she personally deserved it? When would that be? Some set day, like the child’s third birthday? What a somber celebration that would be. Every parent, grandparent, aunt, uncle, and older sibling would dread the day like crazy. Parents — some of them, anyway — would kill their kids to spare them of it. (Don’t think that wouldn’t happen!)

Or suppose the day of deserved pain landed randomly for each child. Then Harrison would decry the injustice of some children feeling it at age 3, while others escaped it until they were 5 or 6. You’d have playmates on either side of the divide, one still living in pain-free innocence while the other suffers pain she brought on herself. How would that even begin to make sense?

But what if only some mothers prayed. The other mothers’ children? They’d suffer life’s normal pains. As if anyone thinks a mother would let that happen!

Another Sad Display of Shallow Atheism

But let me get to the point here. Harrison thinks he’s got this figured out: If God doesn’t answer the mother’s prayer, then there’s no God who answers prayer at all. Atheists who think they’re smarter than God show just how shallow and uninformed their thinking is.

Uninformed — yes, that too. Harrison knows Christians say God sometimes answers “no,” but adds, “This is a clever response, but it doesn’t line up very well with the promise found in the Bible: ‘And all things, whatsoever ye shall ask in prayer, believing, ye shall receive.’”

He’s quoting Matthew 21:22 there. That initial word “and” should be more than just a slight clue, though, that he’s cut right into the middle of a conversation. More than just one conversation, actually, for we know Jesus taught often on prayer. So how could he think this one sentence would convey it all? In John 15:7 he made prayer conditional on our abiding in Christ, and letting His words abide in us. His own prayer in Gethsemane is answered “no”!

But Harrison may say (I’ve heard this kind of thing often enough from atheists), “Okay, but in Matthew 21:22, all he said was you have to believe!” Sure. Believe what? Believe in Jesus. That He has the power. And also that He has the authority — so that He can still decide what He will do in answer to prayer! (Anything else is disbelief in Jesus.) It’s implicit there; it’s stated explicitly in 1 John 5:14-15.

Besides, let’s not be stupid. If God answered every prayer, you’d have both teams winning tomorrow’s Super Bowl. No, not both teams. Every team in the NFL would win it every year! November would be irrelevant: every candidate would win every election! Every man would marry the woman he loves most, even if she doesn’t love him; and every woman would marry the man she loves most, even if he doesn’t love her.

Does Harrison really think Jesus was teaching a world like that, where every person controlled every outcome? Sometimes atheists who try to find nonsense in Christianity fail to see how much they’re committing themselves.

Enough of that, though. We must return to the question we started with.

Does God answer prayer? What about those lost keys? Once when I was a single man it was a lost watch. It was gone for days. I prayed to find it, and then one evening after I’d been home a few hours, it showed up on my bedside table. Sitting on top of my wallet, even. My wallet! Which, naturally, I’d taken everywhere during those days. So of course I assumed my roommate had found my watch and put it there — but he was as surprised as I was to learn I’d found it.

That meant that one of us was lying — except I’m not, and I know George never would — or else God did something for me outside the bounds of nature. He answered a prayer. (Or someone broke in to our apartment and put it there for me. Kind of an anti-burglary. I’d say a prayer answer is more likely than that.)

Every believer has stories of answered prayer. Many of them fall in the category, “Who knows? But thank you, God!” as in, “Who knows whether it would have happened just the same if no one had prayed? But thank you anyway, God!” Some of them, though — including some I’ve told about elsewhere — deserve to be counted as definite prayer answers.

Can we get it wrong? Sure. But if God has answered any prayers at all, then we have our answer: God answers prayers. He does it in His wisdom, in His way, in His time. Atheists don’t have to understand, though it’d be great if they did.

50 Questions for Christians: ‘Why is God So Violent?’