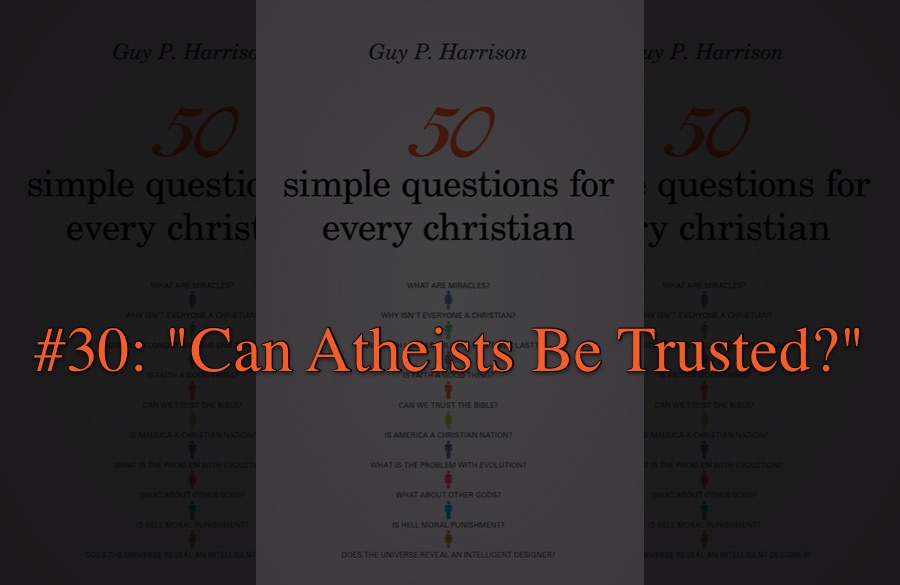 Can atheists be trusted? Good question. Guy P. Harrison starts this chapter with the story of  “an evangelical pastor” who became an atheist after 25 years in the pulpit. This pastor says “he struggles with the ‘hypocrisy and cognitive dissonance’ required to maintain his position as a professional preacher while he seeks a secular job. His congregation is unaware of his current belief status.”

Harrison asks a hard question, though. It’s about a group, when trust is generally a matter of individuals instead. I have an atheist friend I’d trust with anything I own — because I know him, and I’m confident in his integrity. But this chapter isn’t about individual differences, it’s about group differences, or at least different perceptions of groups, where prejudice can enter in all too easily.

Much In Common, But Not That Much

We have much in common. Harrison ends the chapter saying so; it’s a lot better than the way he opened it.

It is in everyone’s best interest, Christians and atheists, to understand one another, to cooperate, and to get along as well as possible. … Remember the common ground. … We are first human beings who share one world together.

The vast majority of atheists are “regular, everyday people,” he says. They’re not immoral; they’re trying to live decent lives. I agree; in fact, the Bible does, too. Moral beliefs come from God, it says in Romans 2:14-15; and not just to His followers, but also to those “without the law.”

We’re in this together. I’ll re-emphasize that every chance I get. But atheists and Christians disagree strongly on what the “this” is, that we’re all in. We differ completely on the meaning and purpose of life, the meaning of morality, the nature of reality itself. Our beliefs differ, and that’s bound to have an effect on our behavior.

Harrison tries to downplay that difference with a warmed-over version of the lame atheistic trope, “We all disbelieve in thousands of gods; atheists just disbelieve in one god more.”  Christians are mostly atheistic, in other words. We’re just a tiny fraction of a percent less atheistic than people who will openly admit to being atheists.

Christians’ “one God more” changes absolutely everything about all of reality. It even alters the one thing on which Christians and atheists have most in common: our shared humanness. Are we created in the image of God or not? That difference makes all the difference.

Harrison’s attempt to stave off prejudice by focusing on what we have in common got off to a good start. It went quickly off the rails, though. How? By his complete misunderstanding of Christianity! And here we’d just read how important he thought it was for us to understand one another.

Trust is about individuals, but he wants us to think in terms of group differences. So let’s go there with him. This is a clear case of difference being defined by our worldviews. Christ-followers (fully committed Christians, that is) have committed themselves to a worldview and a way that emphasizes love, sharing, self-sacrifice, honesty, and integrity, with real accountability at the end of it all.

Atheists, in contrast, have committed themselves to a worldview that teaches — that teaches — oh, nuts. Atheists insist atheism isn’t a worldview, it’s the lack of a worldview. Then it sure can’t teach any of the virtues Christianity teaches! (It doesn’t hold weekly group meetings to support them, either.)

That’s not prejudice. Prejudice is making a decision not based in knowledge. Here you’re using your knowledge, because worldview is both real and relevant.

Most Western atheists actually do subscribe to a particular worldview, though. It’s called philosophical materialism, the view that reality at bottom is impersonal, that nothing spiritual exists, but only matter and energy interacting according to what we call natural law. It’s a worldview that specifically excludes ultimate morality and final accountability.

Atheists often assert humanism as a value. It’s a bit vague, but I’ll still allow it’s better than nothing. Yet it, too, excludes ultimate morality and final accountability, and if it has anything to say about self-sacrifice or love, that’s very arguably borrowed straight from Jesus Christ — to whom they hold no personal commitment whatsoever. And if America’s top humanist leader, Roy Speckhardt, is supposed to be the example, I’m not the least bit impressed.

Whom Would You Choose?

So with those facts in mind, picture in your mind’s eye two groups, each with about a dozen or so people in them. Picture them all looking much like yourself in age, clothing, race, and so on, so appearance plays no part in how much or how little you might trust them. You know nothing about them, except one group consists of strongly committed Christ-followers, and the other is people committed to atheism.

Out of these two dozen people you need to choose one to trust, unsupervised, with your bank account. From which group do you choose? Your choice could conceivably be right or wrong from either group, but which is more likely to be a good choice? If beliefs have anything to do with behavior — as they must! — then obviously you’ll have better chances if you chose a Christ-follower.

Worldview matters. Beliefs affect behavior. I think it’s the same answer Harrison himself would give, if he were wise.

It’s not that atheism causes immoral tendencies; not at all. The number one cause for sin isn’t atheism, it’s simply being human. But where people have tendencies toward dishonesty, Christianity provides an inherent check against those tendencies. Atheism isn’t a thing, based on atheists’ own insistence, so obviously it can provide … nothing. Humanism? Maybe a little, but not nearly as much as Christian belief.

That’s not prejudice. Prejudice is making a decision not based in knowledge. Here you’re using your knowledge, because worldview is both real and relevant.

Can Atheists Be Trusted?

So, “Can atheists be trusted?” My preferred answer is, “Yes, absolutely: If you know a trustworthy atheist, by all means trust him or her!” But that’s answering a different question than the one Harrison asked. I’m talking about individuals there, when he’s talking about atheists as a group.

Even for groups, I’d rather he’d asked that differently, too. I have no answer to, “Can atheists be trusted?” Not without further information, especially, Which atheist? And trusted with what? If you want someone to teach atheism as if it were true, I’d say they’re a great group to trust with it, definitely the best group of all!

He didn’t ask his question that way, though. How could he have? It’s too specific, too individual. He asked a very general question. I’ve done my best to answer it in the same very general terms. Pick a random Christ-follower or a random atheist, on some random trust factor, and your odds are going to be better with the Christ-follower.

Worldview matters. Beliefs affect behavior. I think it’s the same answer Harrison himself would give, if he were wise.