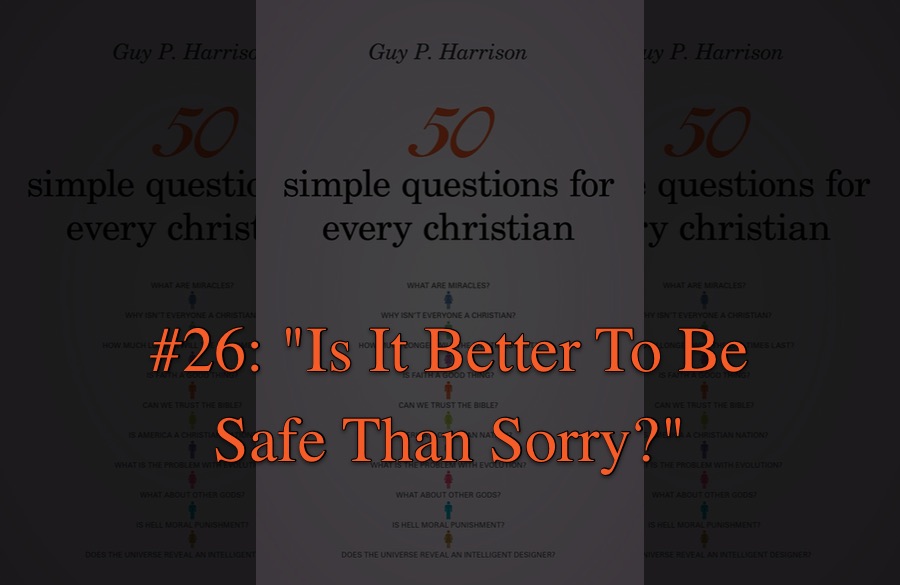 Guy P. Harrison says it’s a bad idea to believe in Christ just because “it’s better to be safe than sorry.” Finally, we agree on something! He’s exactly right. Or at least close enough.

He writes in this chapter about a Christian who asked him,

Look, even if I’m wrong, so what? My life is better because of my belief in Jesus. I’ve been a better person thank to my Christian faith. What did I lose if I’m wrong? But if I’m right, what have I gained? I get eternity in heaven. Atheists, on the other hand, lose everything in the worst way possible.

Harrison adds, “I can’t remember if he added, ‘It’s better to be safe than sorry,’ but that’s what he meant.” He rejects the idea. So do I. We agree for a change!

We even agree completely on two of the reasons he gives for rejecting it. (I’ll word them my way.) First, no one just decides to believe. You could try to “believe” without actually thinking it’s true, but that’s just playing mind games. Harrison is convinced there is no God or gods, and no amount of fire insurance-style effort will make him believe the Christian faith is true while he still thinks it isn’t.

(I do think it’s possible to decide not to believe — to turn away from Christian faith because you don’t like the repentance and commitment it requires, even if you think it’s true. But that’s a different question.)

No one should put faith in Jesus just to be safe rather than sorry. They should do it because they think it’s true.

Second, if that’s the way you’re going to play it, you’d better choose to believe in Islam, too, since there’s always the chance that it’s the real path to heaven. Hinduism, Judaism, Buddhism, Zoroastrianism, Manichaeism, and the Norse and Greek gods, too, just to stay on the safe side. Whew! And we’re just barely getting started. Obviously that’s wrong.

I almost agree with him on two other reasons to reject this “safe side” argument. His friend tells him life with Christ is better than life without. Harrison says that’s probably not true. I say it is true, but it’s still the wrong reason to follow Christ.

Harrison says there’s great cost in following Christ: All those hours wasted in worship, prayer, and so on. But I don’t count one second of that wasted. It enriches my life constantly. (Notice I don’t include overly-long sermons on that list.)

Still we need to bear Jesus’ own words in mind, for He said it would be a mixed bag here on earth: “In this world you will have trouble, but take heart; I have overcome the world” (John 16:33). Also,

Assuredly I say to you, there is no one who has left house or brothers or sisters or father or mother or wife or children or lands, for my sake and the gospel’s, who shall not receive 100 fold now in this time — houses and brothers and sisters and mothers and children and lands, with persecutions — and in the age to come, eternal life (Mark 10:29-31)

Don’t miss the “persecution” clause in there. Overall, yes, it’s an astonishingly good deal. Moment to moment, though? Not always.

All in all it’s unwise to bet on Christianity just to be safe. I don’t think much of the whole “safety” motif anyway. It can seriously stunt your growth as a person.

I was surprised, though, that Harrison didn’t mention Blaise Pascal in this chapter. Pascal may have been the first to put it something like Harrison’s friend did: If you don’t know whether Christianity is true or not, you’re better off betting on it being true. If you’re right, you gain much; if you’re wrong, you lose little. It’s known as “Pascal’s Wager.”

Blaise Pascal (1623-1662) was a brilliant philosopher, mathematician, scientist, theologian, and (yes!) computer theorist. He was not stupid, in other words. His wager doesn’t start from zero, as Harrison’s friend’s proposal seems to have done.

Pascal meant it instead for the person who’s stumped and struggling; one who has seriously considered all the reasons he can get his hands on, and still can’t decide whether Christianity is true. It’s a kind of deciding vote for one who’s stuck on the knife-edge between belief and unbelief.

The Real Question: Is It True?

How does one get to that point? It’s different for every believer. It requires the work of the Holy Spirit in us, first of all, and He uses all kinds of means to bring us to full conviction. The main thing is, by the time a new believer comes to faith, they’re not playing betting games any longer; they’re convinced it’s true. And isn’t that what “believe” means, anyway?