‘You are the Salt of the Earth’ 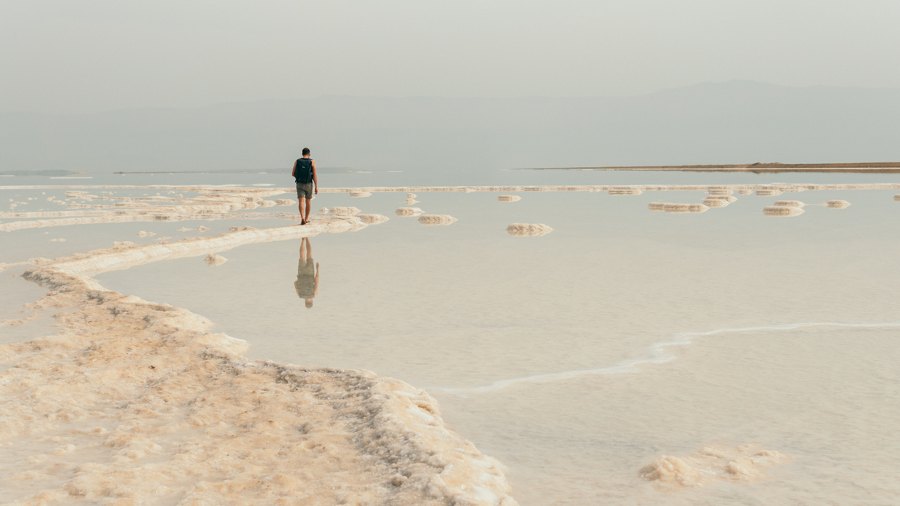 A man walks along the Dead Sea, the area of which was the main source of salt in ancient Israel.

In one of the most famous passages in the Sermon on the Mount, Jesus said to His disciples (and, by extension, to His followers today), “You are the salt of the earth. But if the salt loses its saltiness, how can it be made salty again? It is no longer good for anything, except to be thrown out and trampled underfoot.” (Matthew 5:13; He followed this by saying that we were the light of the world.)

Many New Testament scholars explain that one of the main functions of salt in the ancient world, where refrigeration did not exist, was preservation against corruption.

Applying this to the Lord’s words, one commentary explains, “Jesus’ followers are the saving element of the human race. … They have a power of preservation which counteracts corruption and decay. … As salt prevents food from spoiling, so the disciples are to prevent the corruption of morals. The presence of the disciples delays the corruption of the world and its consequent judgment.”

Others emphasize that “salt improves the taste of food,” and so “the disciples are to improve the quality of the society in which they live.”

Suffice it to say that our calling to be the salt of the earth is anything but trivial.

Still others point to “both preservation and flavoring. … The disciples make a purer earth and make it a better place to live.” (SIL: An Exegetical Summary of The Sermon on the Mount; I have removed the commentary references from this quote.)

Suffice it to say that our calling to be the salt of the earth is anything but trivial. We are called “to prevent the corruption of morals … to improve the quality of the society in which they live … [to] make a purer earth and make it a better place to live.” The stakes are very high!

To Prevent Corruption, We Must Retain Our Virtue

But that only applies if we ourselves really are salt, really are living differently than the world (in moral and spiritual terms) and really are functioning as the moral conscience of the society.

As D.A. Carson noted in his EBC Matthew commentary, citing R.V. Tasker, “The point is that, if Jesus’ disciples are to act as a preservative in the world by conforming to kingdom norms, if they are ‘called to be a moral disinfectant in a world where moral standards are low, constantly changing, or non-existent … they can discharge this function only if they themselves retain their virtue’.”

Ironically, salt still looks the same, whether it is salty, which means that we can deceive ourselves by outward appearance. Outwardly, we may look fine. But what is the state of our souls? What is the quality of our lives? What is the health of our marriages and families? Whom do we resemble more, the world or the Lord?

The World Has Largely Changed Us

The truth is that, for more than a generation now, rather than us changing the world by shining the light into dark places, by overcoming evil with good, by winning the lost and making disciples, by separating ourselves from the sin and pollution of the society, the world has largely changed us.

Thank God for those who are burning bright and retaining their saltiness. But all too many are not, which helps explain the current state of our nation. And so, just as “politics is downstream from culture,” in a country where the Christian faith is supposed to be dominant, culture is downstream from the church.

That means that, if you trace back the moral and spiritual decline of the society, you will find that much of it began among us, the professing followers of Jesus.

That’s also why we are so often ridiculed, mocked, denigrated and even ignored. It is not so much because we are being persecuted for our faith as much as we are being “trampled underfoot” (the words of Jesus) because we have lost our saltiness.

Of course, Jesus is simply making a spiritual point here rather than discussing the qualities of salt. (The SIL commentary notes that, “The impure and highly adulterated salt of ancient times could lose its saltiness because the sodium chloride could leach out or dissolve in humid weather and leave only tasteless crystals which no longer tasted like salt.” Otherwise, generally speaking, salt does not lose its taste.)

But if salt can lose its saltiness (certainly this is true spiritually speaking), what do we make of the Lord’s question, “How can it be made salty again?”

In natural terms, there is nothing that can be done. Salt that lost its saltiness has no useful purpose at all.

Thankfully, the whole Bible calls straying believers to turn back to God in repentance, and as we do, the Lord Himself forgives, restores, and renews.

“God, make us salty again!” The fate of America depends on it.

Five Sure Signs of a Dying Church

Who is Your One?