Yes, CNN’s Marc Lamont Hill Really Did Call for the Elimination of Israel 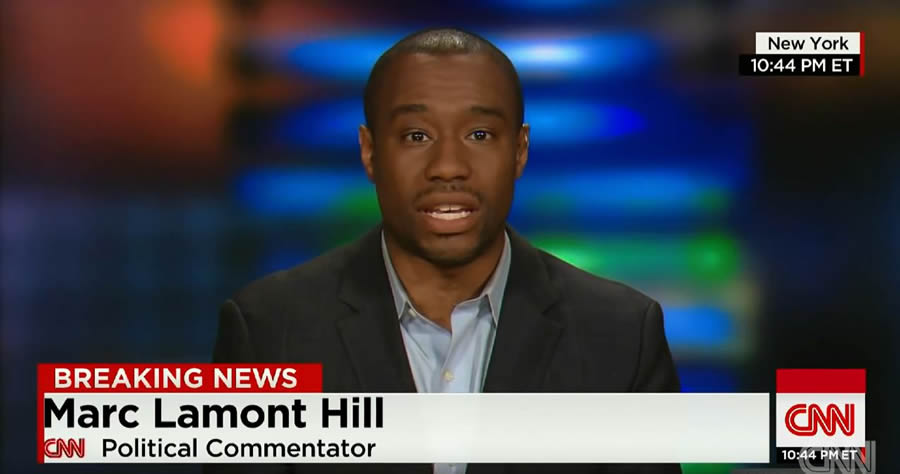 In a speech delivered to a UN committee, CNN contributor Marc Lamont Hill called for “political action, grassroots action, local action, and international action, that will give us what justice requires — and that is a free Palestine from the river to the sea.” Michael Brown explains the rhetorical significance of this phrase.

Update: CNN severed ties with Marc Lamont Hill on Thursday following the backlash from Hill’s speech. A CNN spokesperson told Mediaite that, “Marc Lamont Hill is no longer under contract with CNN.”

It doesn’t matter what spin is put on this in the days ahead. The meaning was clear and unmistakable. CNN contributor and Temple University professor Marc Lamont Hill called for the elimination of Israel in a speech delivered yesterday. Specifically, he called for “political action, grassroots action, local action, and international action, that will give us what justice requires — and that is a free Palestine from the river to the sea.”

Why do I (and a host of other commentators and news outlets) feel so sure that Prof. Hill was actually calling for the end of the Jewish State?

First, Hill has a history of blatantly anti-Israel and even anti-Semitic comments. What he said yesterday was nothing new.

Second, Hill was speaking at the UN’s International Day of Solidarity with the Palestinian People. Need I say more? (As for the UN’s broader anti-Semitic history, see here and here.)

Third, Hill specifically endorsed violent resistance when necessary. (“We must advocate and promote nonviolence at every opportunity, but we cannot endorse a narrow politics of respectability that shames Palestinians for resisting, for refusing to do nothing in the face of state violence and ethnic cleansing.”)

Fourth, and most importantly, there was Hill’s very specific, very intentional, and very direct reference to “a free Palestine from the river to the sea.” The meaning of these words is unmistakable and indisputable.

A Phrase Well-Known to the Enemies of Israel

If all you had was a map of Israel, you would know what Hill meant. The State of Israel exists between the Jordan River to the East and the Mediterranean Sea to the West. The disputed territories called the West Bank butt up to the Jordan, while Gaza Strip butts up to the Sea.

What Hill called for, then, was for everything else — meaning, every square inch of the recognized State of Israel — to be part of a “free Palestine.” Goodbye, Jewish State!

But Hill wasn’t just speaking in clear geographical terms. He was speaking in rhetorical terms well-known to the enemies of Israel. His words — which were the closing words to his speech — were carefully chosen. (Watch the clip here.)

That’s why Students for Justice in Palestine chant these same words at campus protests: “From the River to the Sea, Palestine Will Be Free!”

Hill wasn’t just speaking in clear geographical terms. He was speaking in rhetorical terms well-known to the enemies of Israel.

As noted by the Times of Israel in 2014, “‘From the river to the sea, Palestine will be free.’ What does this even mean? This chant, which is screamed across hundreds of campuses in North America, and Canada, is a call for the genocide of the Jewish people.

“These chanting students are coming from groups such as Students for Justice in Palestine (SJP), and the Muslim Student Association (MSA). Both SJP and MSA trace their roots to the Muslim Brotherhood a terrorist organization that founded Hamas. They both claim ‘Palestine’ is under occupation by Israel, and they are not afraid to voice their opinions on campus.”

Yes, Hill knew exactly what he was saying.

In December, 2012, Meshaal returned to Gaza for a “victory rally” after Israel’s crushing defeat of Hamas in what Israel called Operation Pillar of Defense.

As reported by the Guardian, “Hamas leader Khaled Meshaal vowed Gaza’s rulers would never give up ‘an inch of the land’ to Israel in an uncompromising speech before tens of thousands of cheering supporters at a triumphalist ‘victory’ rally in Gaza City.” (Hamas claimed the crowd was half-a-million strong.)

Yes, Meshaal affirmed to his enthusiastic hearers “Palestine is ours, from the river to the sea and from the south to the north. There will be no concession on an inch of the land. We will never recognise the legitimacy of the Israeli occupation and therefore there is no legitimacy for Israel, no matter how long it will take.” (My emphasis.)

This is in keeping with the original Hamas charter, which states that “‘our struggle against the Jews is very great and very serious’ and calls for the eventual creation of an Islamic state in Palestine, in place of Israel and the Palestinian Territories, and the obliteration or dissolution of Israel.”

Again, in 2014, another Hamas leader used similar words. Memri.org reported: “During a military parade, conducted in Gaza on December 14, 2014, Khalil Al-Hayya of the Hamas leadership declared: ‘Palestine, all of Palestine, from the Mediterranean Sea to the Jordan River, is pure Arab Islamic land, which we will share with no one.’” (My emphasis; watch the full video clip, with translation, here.)

CNN Must Renounce His Comments

CNN needs to discipline him immediately and make a clear and unequivocal statement renouncing his comments. Anything less than that is unacceptable.

(For my one and only direct interaction with Hill on CNN, see here.)