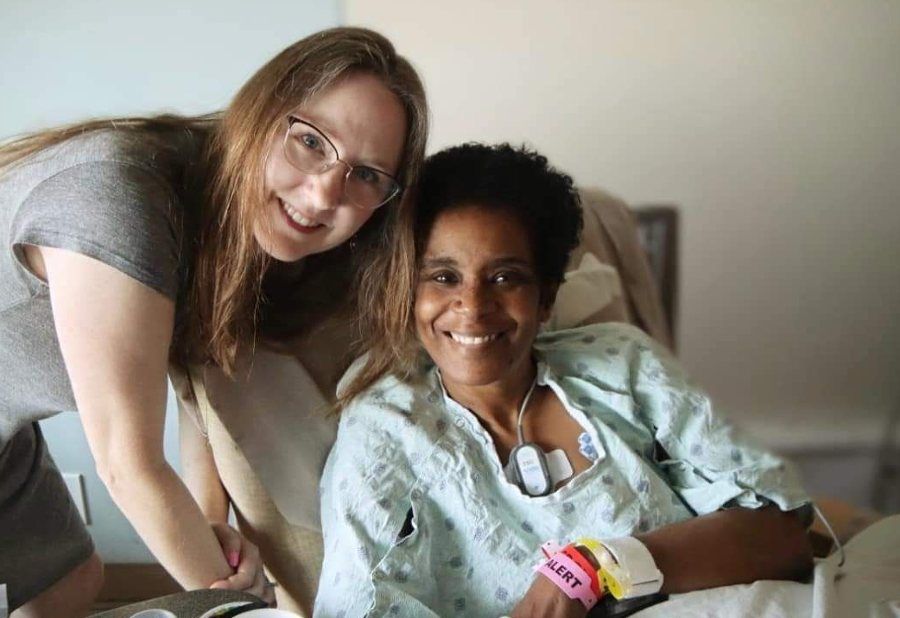 The situation felt hopeless to Shelley Guillory. For over 20 years, the mother of three adult children had been on kidney dialysis and seeking a kidney donor.

But dozens of half-starts had proved fruitless. Last July, she shared her struggle openly with a tight-knit group of friends at a retreat center in southeast Texas. About 30 women, and a few men, had gathered for a healing retreat hosted by a pro-life nonprofit group And Then There Were None (ATTWN). ATTWN helps former abortion industry workers to leave Planned Parenthood centers and other abortion providers. In 2013, thanks to that ministry, Guillory had left her medical position at a Louisiana abortion center.

“It seemed like everything she had tried was failing,” said ATTWN founder Abby Johnson in a phone interview. “The only thing we knew to do at that moment was just to cry out to God.”

According to multiple sources who attended, dozens of women gathered and laid hands on Guillory. Johnson led the group in intercession: “Jesus, I pray that Shelley’s donor is right here in our midst.”

Within months, one of the women present would prove to be the answer to that prayer.

As a teenager, Guillory was diagnosed with polycystic kidney disease. The condition reduces kidney function and can lead to kidney failure. She didn’t consider her prognosis severe in her 20s, as she studied to become a nurse. Then, in late 2001, her nephrologist reached out.

During her shift as an ER nurse, she received an urgent call. “Based on my lab results, he said I needed to start dialysis immediately,” recalls Guillory, today age 49, in a phone interview. “And that I needed to start the work-up for a kidney transplant.”

According to the National Kidney Foundation, the average wait time to be paired with a donor can be 3 to 5 years. But in the economically depressed Gulf Coast region, Guillory’s wait lasted much longer.

By 2013, she was lead clinician at Delta Women’s Clinic, an abortion facility in Baton Rouge, La. Guillory saw many practices she questioned as a nurse, but the pay was good. When her eldest son suddenly died at age 20, she took some time off to grieve the loss.

“During that time, I began to realize that my beliefs didn’t line up with the clinic’s beliefs,” she told me. On her first day back to work, a pro-life protester outside the abortion center handed her a card for And Then There Were None. Inside, she called the number. Abby Johnson answered.

Guillory had questions about her license and if the center could come after her legally. “I’m a good judge of character,” said Guillory. “And I knew I was being lied to by my organization. But when I spoke to Abby, she assured me I had the ability to leave at any time I wanted.”

She left that day, becoming one of the first medical workers to go through ATTWN’s program. But Guillory still needed a kidney transplant, and the situation was getting more desperate.

Within a few months of these events, a similar scene played out over 1,000 miles away in northwest Ohio. For six years, Caroline Strzesynski had worked as a women’s health clinician at a local Planned Parenthood facility.

“Our affiliate did not actually perform abortions, we referred women to other centers,” she said in an interview. “But, as we were merging with another center, I learned of the quotas and decided to leave.” Becoming a mother and a Christian around this time also factored into her exit.

Within the past four years, Strzesynski linked up with ATTWN and found grace in new friendships. In early 2021, she briefly interacted with Guillory a couple times — at the March for Life and again at the Texas summer retreat.

But she didn’t learn Guillory’s full story until September 2021, when they both participated in ATTWN’s first-ever Quitters Ball. At the formal dinner honoring approx. 600 former abortion workers, the two nurses (and their husbands) happened to be seated at the same table.

Related to a food allergy, Guillory had a reaction and her throat began to swell. Her husband, Donald, went to find Benadryl.

“As we nurses do, I started talking to her, but I was actually assessing her,” said Strzesynski. “I asked where she was at in the transplant process, and she still hadn’t found a donor. When I learned we had the same blood type, I told her I’d look into it.”

Overwhelmed by a Stranger Who ‘Became Family’

After initial tests, Strzesynski learned within weeks she was a match. She reached out to Donald Guillory, who asked her to double-check. This time, it wasn’t a dead end.

When she learned of the match, Shelley Guillory says she felt “an overwhelming sense of peace.”

The two women began a nine-month process. This past spring, Strzesynski traveled to Louisiana to undergo a full work-up of medical tests. “They gave me so many scans,” she said. “And the amount of blood they drew, it could supply an entire Red Cross chapter!”

As a mother of two children, ages 12 and 16, Strzesynski had to work out some logistics. Thankfully, the National Living Donor Assistance Center covered her travel expenses.

On June 13, the two women underwent surgery at Oschner Medical Center in New Orleans that lasted 3 hours and 45 minutes. The doctors and surgical team reportedly had no complications.

“For her to give the selfless gift of an organ from her body, it was just overwhelming for me,” said Guillory. “I woke up saying, ‘God, there are people in this world who truly care about others.’”

Days later, Strzesynski flew back to Ohio. However, because of the risk of her body rejecting a new kidney, Guillory had to stay in a nearby outpatient facility for several weeks. And Then There Were None covered those post-op expenses.

Johnson is grateful their supporters could assist in this way. “She’s such an important part of our ministry and our tribe,” she said.

‘Our Hearts Are For Each Other’

Though they live a thousand miles apart, the two women are often in contact. “When you go through something like this together, you become family,” said Strzesynski. Her friend affirmed with a hearty, “Mmm hmmm.”

Almost a year has passed since the two women were seated at the same table for that ATTWN pro-life event.

“It was no coincidence that I was moved to Caroline’s table,” says Guillory. “That became a divine inter-connection like no other.” Johnson confirmed that the Guillorys and the Ohio couple were assigned to the same table at the last minute.

Due to their shared experiences of exiting the abortion industry, and finding community in a unique pro-life ministry, these two women met. Their friendship enabled a woman’s life to be saved. For Johnson, it speaks to “how God wants to redeem every part of our past.”

She added: “In the pro-life movement, ending abortion is our primary focus — as it should be. But I think this story shows exactly who we are. We’re here to protect humanity. And our hearts are for each other.”

Learn more about And Then There Were None, which assists workers seeking to leave the abortion industry.

This is Abortion in the United States