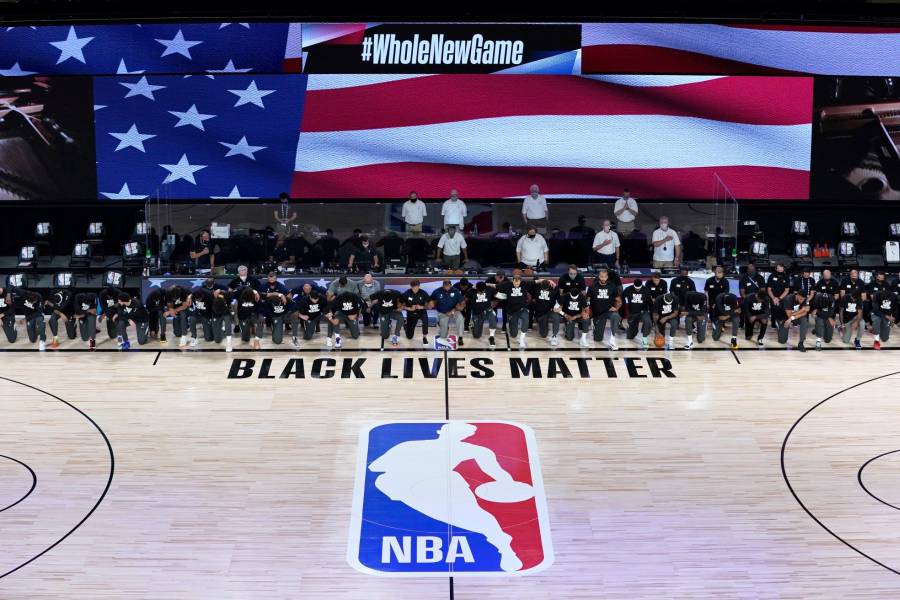 Since George Floyd’s death, professional sports scamper to conform to the new “woke” narrative. Players may kneel during the national anthem, or choose to remain in their locker rooms. Baseball fields, basketball courts and uniforms proclaim, “Black Lives Matter.”

On July 27, the NFL announced that end zones would contain the messages “End Racism” and “It Takes All of Us” at each team’s home opener. Six days earlier, players received permission to display on their helmets the names or initials of those considered to be victims of racism.

Sports fans are not amused.

“You will be allowed no solace from Big Woke,” tweeted one fan. “No pastime or entertainment will be left alone.”

That’s the idea. Every area of society — including sports — must reflect and reinforce “Big Woke’s” ideology. This isn’t actually new. American progressives copied that idea from history’s most brutal dictatorships.

Nazi Germany became the first to manipulate sports for ideological and geopolitical purposes. The Nazis used sports to glorify the “Aryan” race and prepare Germany for war.

For the 1936 Summer Olympics in Berlin, they needed to impress tourists and quiet fears of Germany’s ultimate intentions. So the Nazis turned the city into a modern Potemkin village.

“We must be more charming than the Parisians, more easy-going than the Viennese, more vivacious than the Romans, more cosmopolitan than London and more practical than New York,” stated the Nazi newspaper Der Angriff almost a month before the Olympics.

Defusing suspicion belonged to a broader strategy, as Richard Mandell wrote in his book, The Nazi Olympics.

“The four million Berliners,” Mandell wrote, “have constant instruction from above that they had been entrusted with an obligation to demonstrate the excellence of German National Socialism to the whole world.”

The Nazis even dramatically downplayed their anti-Semitism. They removed anti-Semitic signs and publications. Propaganda Minister Joseph Goebbels ordered newspapers not to discuss race in their Olympic coverage. The German Olympic Committee reinstated Helene Mayer, a world fencing champion and a 1932 Olympian. Mayer had been expelled from her athletic club in 1933 for having a Jewish father.

“Jew-baiting had been ordered to cease from the highest quarters,” Mandell wrote. “Evidence of persistent racialism might be, and was, interpreted as vestigial rough edges of a superseded policy.”

The result? As Mandell wrote, “almost no one escaped the impression that the new Germans were working hard, were playing hard, were at peace and would stay that way.”

“For the Motherland, Lyuba!”

During the Cold War, the Soviet Union viewed athletes as valuable as soldiers or diplomats because victorious athletes demonstrated Communism’s superiority to the world.

Sergei Pavlov, chairman of the U.S.S.R. Committee of Physical Culture and Sport, said in 1976 that sport provides “another sphere, another criterion for evaluating the advantages of the Soviet political system.”

Promoting Communism meant creating a complex system of state-run schools and clubs to produce technically proficient, ideologically correct world-class athletes. A coach’s fundamental duty was instilling what a Soviet periodical called a “high Communist consciousness” in which athletes saw themselves as “Soviet patriots irreconcilable to the enemies of socialism and Communism.”

Cross-country skier Lyuba Baranova illustrated that indoctrination’s intensity in an interview with the newspaper Sovietsky Sport during the 1980 Winter Olympics:

“ ‘I mentally transferred myself to the siege of Leningrad from the first day to the last.’ When the skiing got difficult, Lyuba remembered the blockade of the city on the Neva and said to herself, ‘For the Motherland, Lyuba! For Leningrad!’ ”

Athletes don’t have to win medals or honors to serve an ideology, as Iran showed during the 2004 Summer Olympics in Athens.

Arash Miresmaeili, a two-time world judo champion and a medal contender in the 66-kilogram class, deliberately forfeited his first-round match because his opponent, Ehud Vaks, was Israeli.

“Although I have trained for months and now enjoy an in-form build,” Miresmaeili told Iran’s Islamic Republic News Agency (IRNA), “I have refused to face my Israeli rival in sympathy with the oppressed Palestinian people.”

Iranian officials greeted Miresmaeili’s decision enthusiastically. Iran’s ambassador to Greece, Mehdi Mohtashami, congratulated Miresmaeili on his “courageous move to refuse to compete with a judoka from the Zionist regime,” he told IRNA. “Certainly, (the) Iranian nation considers Miresmaeili as the real champion of (the) 2004 Olympic Games.”

The chief of Iran’s Olympic delegation, Nassrollah Sajadi, asked the government to give Miresmaeili the $115,000 reward reserved for gold medalists.

Then-president Mohammed Khatami said in a message to Iranian athletic officials that Miresmaeili’s decision “in protest to the massacre of Palestinian people by the Zionist regime will be recorded in the history of Iranian glories,” IRNA reported.

Iranian officials timed Miresmaeili’s announcement to coincide with the opening ceremonies, where he would receive attention as Iran’s flag bearer.

During the 2018 World Cup, Mehdi Taremi, a stellar Iranian forward, reposted a tweet from Supreme Leader Ali Khamenei. Taremi publicly agreed with Khamenei’s declaration that Israel would cease to exist within 25 years.

What about those who even mildly disagree? Just ask Drew Brees. Or his wife. Or Vic Fangio.

“It’s obvious,” tweeted another fan. “Players are being forced to take sides in political debates. Instead of seeing them as top-notch athletes, now people can’t help but view them through a political prism.”