Will Charlie Gard Bring Down the European (Soviet) Union? 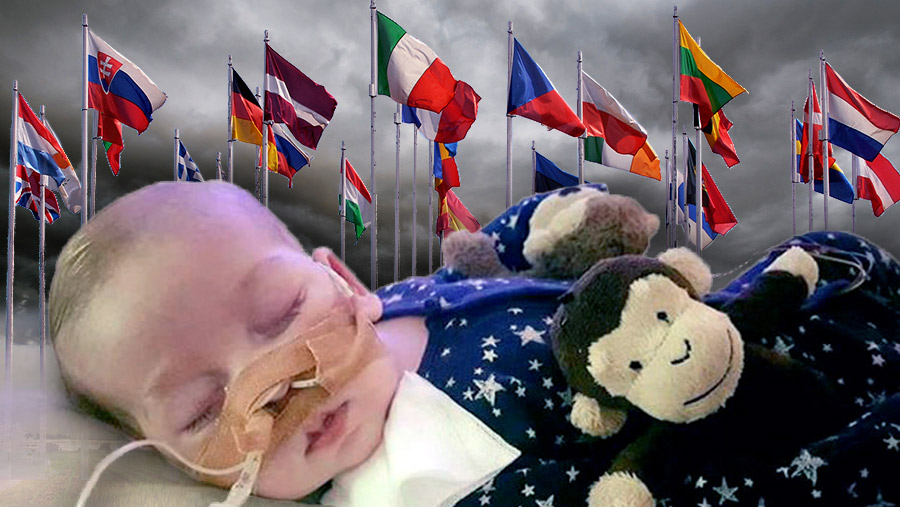 The plight of Charlie Gard and his parents is awakening consciences around the world. What could be more clear-cut than this case? Parents who love their baby have found the money to try a treatment that just might save him. But doctors, British courts, and the European Court of Human Rights (Ministry of Love, anyone?) are all colluding against them. Against a baby.

Why? That’s the staggering question. What do all these powerful people care if two parents try this treatment? Are they afraid that it won’t work? Not at all. They’re straining at the leash to shut off his food and water. To turn off his respirator. Are they scared it will cause him anguish? Zero evidence for that.

A “Life Unworthy of Life”

No, the British doctors, judges, and the European court are afraid that the treatment might work. That it might save a “life unworthy of life.” It might set a troubling precedent: that the handicapped have value. That life is sacred and suffering is redeemable. Even that something matters more than piling up happy moments before you die. This spectacle of people around the world contributing to help two loving parents care for their sick, crippled child, who willingly embrace the sacrifices entailed … It shames them. They find it repulsive. It reminds them of the Cross.

No treason could be more profound and perfect.

Western Europe has gone beyond rejecting the supernatural. It can barely contain its revulsion at nature and life itself. Few countries in Europe have enough births to replace the dying. Eurocrats have chosen to outsource the grubby work of reproduction to the Muslim world, in the form of “refugees.” What more comprehensive way on earth could there be for them to reject their ancestors? To salt the earth against descendants? No treason could be more profound and perfect than to sterilize themselves and hand the Continent over to total strangers.

Erasing Our Ancestors, Aborting Our Descendants

Childless elites rule Europe in secret through unelected commissions — it sounds like some crazy futuristic novel, doesn’t it? But it’s the cold, unvarnished truth. These oligarchs loathe their subjects. They despise more than anything those who cling to one piece or another of their grandparents’ natural and supernatural pieties:

The suave and rootless Citizens of International Business Class have their own set of deep-seated feelings. Most of them start with scorn.

They loathe people like Charlie Gard’s parents. “Ignorant” Britons who support measures like Brexit. “Benighted” Poles who won’t legalize abortion. “Bigoted” Hungarians who won’t let “the Turk” reoccupy their country. “Racist” Americans (of every race) who voted for Donald Trump.

Charlie Gard has become a symbol, whose influence will live on. His parents are doing what’s healthy and natural. So are the voters in Poland, Slovakia, and Hungary. And yes, so were we in our last presidential election.

These elitists are desperate to keep real decisions out of the hands of voters. To concentrate power upward, in the hands of the few. To manage the media, censor Facebook, terrorize populists and patriots. And to stigmatize as “extremists” those who still think and speak as Churchill, De Gaulle, and Adenauer once did — of freedom, faith, and Western civilization.

The Pope as Gravedigger of Christendom

We were ashamed to see the Vatican’s Academy Council for Life weigh in against the rights of parents. Against the value of Charlie’s life. We are appalled to read that Pope Francis wants to grant more powers to the European Union, at the expense of elected governments.

Yes, it’s true that Pope Francis, after a week of backlash among Catholics, overruled his handpicked choice to run the Pontifical Council, Archbishop Paglia. Yes, the pope finally weighed in on the side of life. But no one should be impressed until he fires Paglia, and the pro-abortion thinkers whom Paglia brought into the Vatican — replacing real, heroic pro-life intellectuals at the nerve center of the worldwide pro-life movement.

We can’t say whether Charlie Gard will live or die. That’s in God’s hands now. But we do know this: He has become a symbol, whose influence will live on. His parents are doing what’s healthy and natural. So are the voters in Poland, Slovakia and Hungary. And yes, so were we in our last presidential election. So are the countless patriotic citizens in other lands who cling to their national heritage, and refuse to be dispossessed. To be tyrannized in secret, then brow-beaten and humiliated by strangers who hate their values.

It’s Always About a Baby

We don’t know if doctors will let little Charlie receive the medicine that could save him. Or if Europeans will take the only remedy that could redeem them — the faith of their ancestors in Jesus Christ.

But it’s fitting that the fate of an almost childless continent might be changed by the life of a baby. Let us pray that in two decades a grown-up Charlie Gard will look around with wonder — and see a Europe renewed, restored, set free. … A Europe that finds its identity not in gadgets or slogans or ideology, but in that baby Who long ago lay helpless in a manger in Bethlehem.

NOTE: The European Court of Human Rights is not controlled by the members of the EU, but rather by the more broadly-based Council of Europe.

The Christchurch Killer and Cardinal Danneels: Two Traitors to Christendom