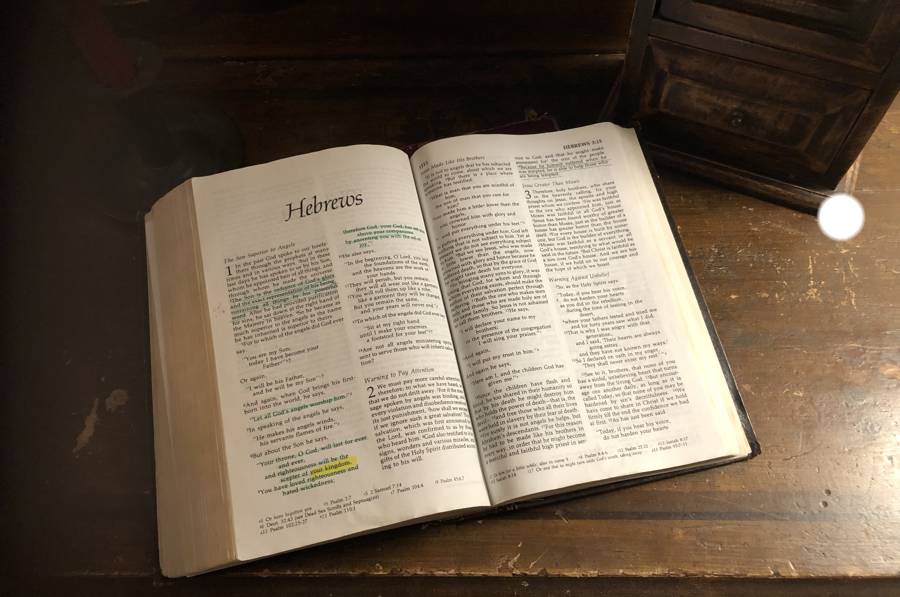 “Pastor, I know I’m supposed to believe in Jesus, but have you seen how they’re pushing back on us? Everywhere I turn, they’re saying we’re wrong about sex, politics, science, everything. They’re either laughing at us or they hate us.”

“Well, son, you need not worry. Just remember God has spoken to us in the Bible, and especially remember Jesus our creator, the ruler of the world. He’s our God, and He’s also the One who’s revealed God to us. He died to save us from our sins, and He rose again. You can still follow Him based on that, can’t you? What else could you need to know?”

The question is the one millions of young churchgoers are asking. The pastor’s answer — all but the closing questions — is paraphrased straight out of the Bible, the first paragraph of the book of Hebrews:

In the past God spoke to our ancestors through the prophets at many times and in various ways, but in these last days he has spoken to us by his Son, whom he appointed heir of all things, and through whom also he made the universe. The Son is the radiance of God’s glory and the exact representation of his being, sustaining all things by his powerful word. After he had provided purification for sins, he sat down at the right hand of the Majesty in heaven. So he became as much superior to the angels as the name he has inherited is superior to theirs.

A biblical answer, then? No, actually, it’s a bad answer, and not biblical at all; not unless you go on and give the rest of the answer.

Not Such a Biblical Answer After All

Where can you find these answers?

How can we explain what makes Jesus so incredibly relevant today? How do we know His accounts are true? I wrote Too Good to Be False to answer those questions. John Zmirak, a man known for speaking exactly what he believes, recently called it the best book on Jesus’ character in close to 100 years. The book’s subtitle tells some of the rest of the story: It’s all about How Jesus’ Incomparable Character Reveals His Reality.

I hear it especially from atheists and skeptics telling me, “I grew up in the church. I had questions. They told me I should ‘just believe and quit asking.’ None of that for me, though. If they can’t stand fair questions, they must be hiding something.”

Sure, it’s in the Bible, but that doesn’t make it biblical. It’s only a biblical answer if it’s an answer like the Bible would give. The whole answer, that is. This pastor paraphrasing Hebrews isn’t doing that. He’s only giving the introduction to the answer. Or you might call it a preview of where you’ll end up after you’ve finished answering.

This Letter to the Hebrews comes out of a situation a lot more like ours than most Christians realize. It’s hidden in some strange language and in the theology God packed in there for us, but the letter’s purpose has much in common with what we’re talking about here.

It was written — by whom, no one knows — to a community of Jewish believers who were under pressure to give up the faith. (You see strong signs of this in chapter 10.) Some of them may have been imprisoned; all were under intense cultural pressure to back out of following Jesus.

In their case it was about the Jewish religion in which they’d been brought up. The incentive to revert to it was powerful: It really had been God’s revealed way, given to God’s chosen people, by which they’d maintained both faith and community for centuries on end.

So they had questions. Hard ones. Wasn’t the way of Abraham good enough? What about Moses? What do we do with the sacrifices we’ve been offering all these hundreds of years? Wasn’t that how we were supposed to get our sins atoned for? And now you’re saying it’s — what, just one man? What’s so special about Him? And ‘faith’? Look, that’s all new to us, too. What makes you think we can just dump everything and switch over to this new religion you’re teaching?

The writer of the letter could have answered in just a few sentences, the same ones I already quoted above. He could have said, “Look, that’s who Jesus is. He’s the image of the invisible God! He died and rose again for you! Why do you keep on asking all these questions?”

He could have said that, but he didn’t. He answered the questions instead. Read through the book, and you’ll see how he does so. Yes, He starts out telling us how Jesus is better than the angels. Then how he’s greater than Abraham, and greater than Moses. He’s answering their real questions here!

The letter goes on. Jesus’ sacrifice for our sins isn’t some bizarre new thing we’ve dreamed up; instead it’s the final and complete fulfillment of everything the old system God gave us previously was looking forward to. And faith? That’s been there all along, too, as we read in Hebrews 11.

We could answer the way the pastor did above: “Just believe, and stop asking.” It might almost seem biblical, but it wouldn’t be. The example we get from the Bible is a question-answering example. It’s the example we must follow.