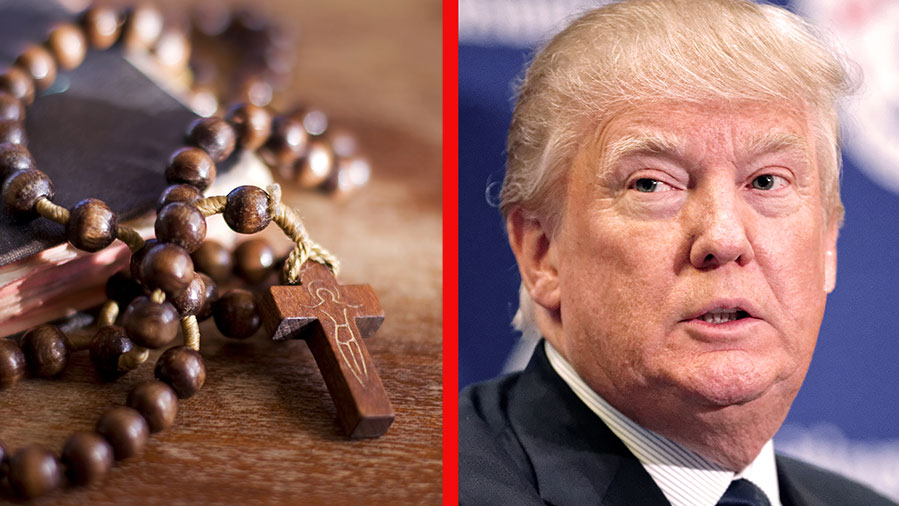 A recent survey by RealClearPolitics and EWTN News exposes deep fault lines over politics, basic morals, and core Christian beliefs among self-professed U.S. Catholics. As I’ve written here before, the Catholic vote matters to everyone. It might be the hinge on which the 2020 election turns. While we can write off as hopeless many Catholic voters in the Northeast (see Rhode Island, the most “Catholic” and perhaps the most pro-choice state in the Union), that’s not the whole story.

Catholics are a huge swing vote in crucial Midwestern “battleground” states. That is, the places which President Trump shocked Democrats by winning in 2016. But he won by narrow margins, small enough that the states could go either way in 2020. So the voting choices of large subgroups such as Catholics, and the intensity of their turnout, could spell the difference between a second term for Trump, and a socialist in the White House.

The data from this professional survey reveal profound divisions inside the Church, which ought to surprise no one who reads the news. Reading this report should deeply trouble any Catholic, and serve as a flashing Do Not Enter sign to non-Catholic churches that are flirting with the Woke post-Christian heresy.

Only 18% of Catholics Accept All Church Teachings

Here are the key takeaways from the survey:

On this last point, the numbers confuse me, perhaps because of how the polling sample was found. According to Pew Research, 40% of Americans raised Catholic have in fact left the Church, not to return. The survival of Catholics as almost 30% of Americans is only maintained by large-scale Latino immigration. However, that seems to be a short-term solution, as many Catholic immigrants drift away. Indeed, for the first time a majority of Latinos in America no longer claim to be Catholic. That percentage is down to 47%.

The Bishops: A Government in Exile

Heckuva job our bishops are doing, isn’t it? Why don’t we ask them how to run the U.S. government? In fact, we don’t need to. The U.S. Conference of Catholic Bishops (USCCB) acts like a legitimate government in exile, issuing more than 200 policy papers every year. A few of them deal with key moral issues such as abortion, euthanasia and religious liberty. But the overwhelming majority repeat leftist talking points. They are distinguishable from Democratic National Committee press releases only by occasional out-of-context scripture references, and clunky Pope Francis quotes. In other words, most of the time the bishops aren’t preaching faith or teaching morals, but pushing the politics of the Grand Inquisitor.

Throwing the Unborn Under the Bus

Just a few days after this survey hit the media, the U.S. Senate voted on two of the mildest pro-life bills ever offered. As the U.S. Catholic Herald reports:

The Pain-Capable bill, which would protect unborn children from late-term abortions, failed to advance by a vote of 53 to 44.

The Born-Alive bill failed to advance by a vote of 56 to 41. It would prohibit infanticide by ensuring that a child born alive following an abortion would receive the same degree of care to preserve her life and health as would be given to any other child born alive at the same gestational age.

Every Catholic Democrat in the Senate opposed these very modest, even timid efforts to protect unborn children from lethal violence. So did every Democratic presidential contender supported by a majority of Catholics.

Most of the time the bishops aren’t preaching faith or teaching morals, but pushing the politics of the Grand Inquisitor.

As the Herald notes, “Archbishop Joseph Naumann of Kansas City, Kansas, chairman of the U.S. Conference of Catholic Bishops’ Committee on Pro-Life Activities” called it “appalling that even one senator, let alone more than 40, voted to continue the brutal dismemberment of nearly full-grown infants, and voted against protecting babies who survive abortion.”

The Seamless Garment: A Poisonous Utopia

Naumann’s election as head of that Committee was a win for pro-lifers. The voting guide issued by the USCCB tips the hat. It calls protecting unborn children “pre-eminent.” But it buries the abortion issue amidst a sea of other prudential questions on which faithful Catholics may (and do) disagree. Thousands and thousands of words on “gun violence” “environmental stewardship,” “comprehensive immigration reform,” and the “unacceptable” use of the death penalty.

Through the sheer ink spilled in their tedious and baffling voters guide, the bishops endorse the Seamless Garment first woven by Cardinal Joseph Bernardin. Its goal was always obvious. That is, to saddle Catholics with a utopian political program no political party has ever fully favored, or ever would. And make life safe for pro-abortion Catholic legislators. The Nancy Pelosis of the world can truthfully do the math. They score “better” than Republicans at backing a larger number of the bishops’ big government policies.

None of the Catholic senators who voted against the recent bills will be ordered not to receive Holy Communion by his local bishop, except for Dick Durbin of Illinois. His courageous local bishop, Thomas Paprocki, called on Durbin to atone for his pro-abortion votes or avoid Communion. A few weeks later, higher-ranking Cardinal Blaise Cupich of Chicago weighed in. He made a supportive, public video call to Durbin to thank him for voting Cupich’s way on immigration. In case, you know, Illinois voters got the wrong idea.

There is one piece of good news in the survey. As the Register reports,

By nearly a two-to-one margin (57%-29%), Catholic voters support the death penalty, even while 63% are aware of the Church’s updated position on this issue (that Pope Francis has declared it inadmissible and that the Church should work with “determination for its abolition worldwide”).

It seems Catholics realize that a Church which can “update” its “position” to deny the Covenant of Noah can’t demand their complete obedience on every policy question.

John Zmirak is a senior editor at The Stream, and author or co-author of ten books, including several on Catholicism.