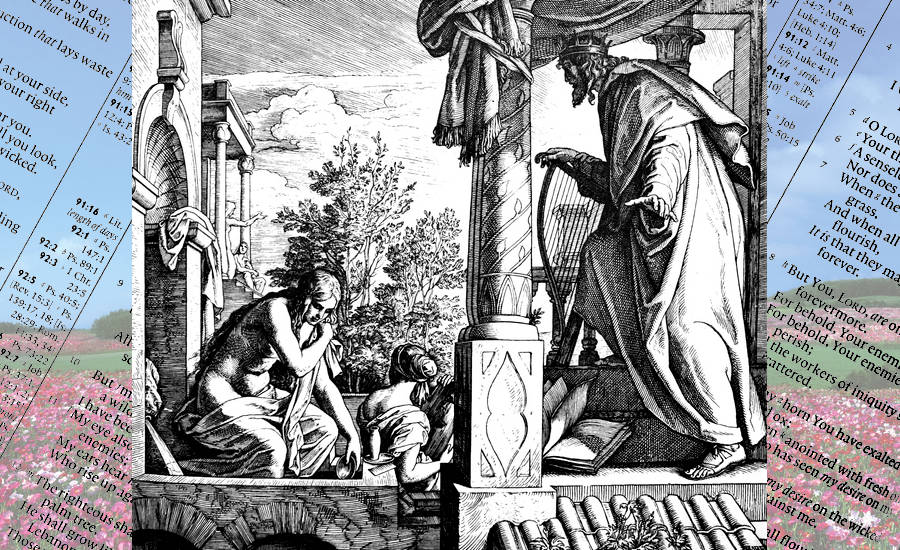 David was a man after God’s own heart, writing most of the Book of Psalms. But he also committed grievous sin, committing adultery with a woman named Bathsheba. Then, when he found out she was pregnant, he had her husband killed. Why are the writings of this man in the Bible?

I was on the phone last week with Stream founder James Robison, when he broke down weeping as he shared God’s heart. His words have stayed with me every day since, leading to the article you’re now reading.

“Why,” James sobbed, “is Solomon still in the Bible with all the sin he committed? Why is David still there?”

If it were up to us, would we have preserved their words in the Scriptures?

The Lives and Writings of David and Solomon

David was a man after God’s own heart, writing most of the Book of Psalms. But he also committed grievous sin, committing adultery with a woman named Bathsheba. Then, when he found out she was pregnant, he had her husband killed.

David the adulterer and the murderer, yet still commended for his godliness and devotion through the rest of the Scriptures. And those very Scriptures record the depth of David’s repentance after his terrible sins. (See 2 Samuel 11-12, then read Psalm 51.)

If it were up to us, would we have preserved their words in the Scriptures?

What about Solomon? Scripture calls him the wisest man who ever lived, and with his wisdom, he wrote most of the Book of Proverbs. The books of Ecclesiastes and Song of Solomon are also attributed to Solomon.

But Solomon, like his father David, also committed grievous sins, marrying many pagan wives (he had 300 wives and 700 concubines!) and becoming an idol worshiper himself.

Solomon the sexual sinner and idolater, yet still commended for his wisdom through the rest of the Scriptures. (In Solomon’s case, there is no clear record of him repenting, although some traditions claim that he did.)

What We Would Do Versus What God has Done

What would we have done if we were compiling the books of the Bible?

After all, these men offended God deeply with their actions. These men, under the Law of Moses, were worthy of death.

So, we can safely tell their stories, which are cautionary tales in themselves, but we cannot quote their words. Who would want to sing the songs of an adulterer and murderer? (In case you didn’t know it, the psalms were originally set to music and meant to be sung.) Who would want to follow the wisdom of a man who slept with at least 1,000 different women and worshiped many different gods?

But that was not God’s perspective.

He looked down at a Saul of Tarsus, a Jewish man violently persecuting fellow-Jews who believed in Jesus, and said, “That man will be a mighty apostle for the faith!”

He looked down at a Moses, a prince trying to take the law into his hands to the point of killing an Egyptian, and said, “That man will lead My people out of Egypt!”

He looked down at you and me, in the midst of our sin and rebellion and folly, and said, “They will be My beloved children, sharing My message with the world!”

To the core of His being, our God is a Redeemer, and we see that redemptive love in every page of His Word.

He recognized what David and Solomon had to offer, and He wanted all generations to be blessed by their words.

Not only so, but the Lord is not ashamed to work through imperfect and flawed vessels. (The truth is that if He didn’t, no Christian work of any kind would ever take place.)

By His Goodness We Become Good

Even when we blow it, that does not completely undo the good we have done. That does not totally blot out our legacy.

When it comes to someone like Solomon, who may not have repented before his death, we read his words of wisdom in Proverbs with all the more attention. He failed to heed his own advice! All the more should we not do the same.

James also said on the phone to me, “Just think of how Peter hurt the Lord’s heart when he betrayed Him, but just a few weeks later, the Lord made Peter the keynote speaker at Pentecost” (see Matthew 27 and Acts 2).

And for all of you who say, “You don’t know my life. I’ve fallen too far to ever recover. I’ve disgraced the Lord’s name one too many times,” I leave you with these words from Jeremiah 3:22: “Turn back, O backturning children. I will heal your backslidings” (my translation).

His love can still prevail.

Do You Think That a Man Can Change?

No Easy Answers to the Problem of Suffering