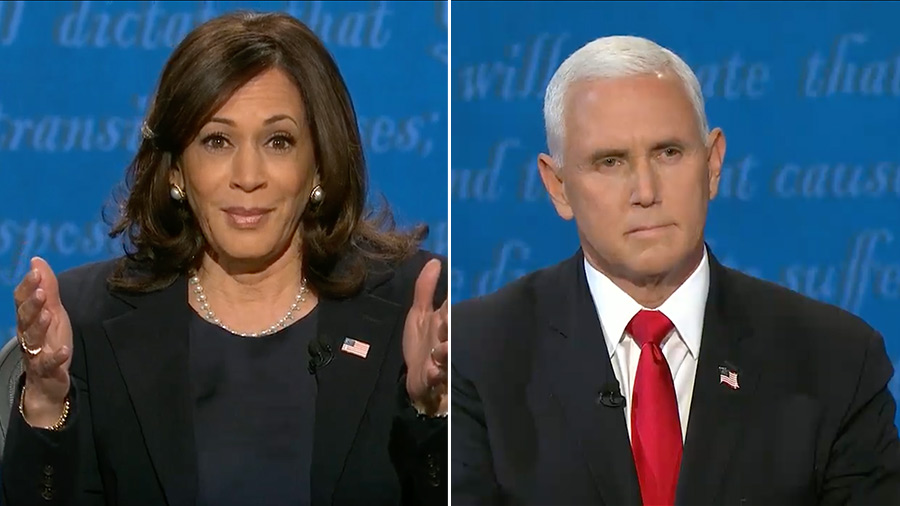 History will remember most about last night’s VP debate the small creature that took part in the proceedings. Oh, and that fly that landed on Mike Pence’s head.

We’ll get to the fly who crashed the debate soon.

Last night, I wrote a 1,400 word wrap up of the debate. I was awakened early this morning by a thought that summarized the debate in four: “Kamala Harris is small.”

What did I mean by that? Don’t worry, I asked myself that too.

In the rush after a debate you write down your impressions, describe what happened. Then when you sleep, the brain organizes, and searches for the essence. Then your subconscious boots you in the back, yelling, “Wake up! Here it is. Here’s your real takeaway.”

Kamala Goes to the Desert

Last night I wrote about some, but not nearly, all the lies — the divisive lies — Harris told about Trump. Like the Charlottesville Hoax.

The moment that crystallizes it to me is one I doubt will be mentioned in today’s recaps and hot takes. Mike Pence was talking about how we had taken out Iranian terror mastermind Gen. Qasem Solemeini. Seems a good thing to kill a man responsible for the deaths of hundreds of American soldiers, and a spree of terror acts across the Middle East. A man who had plotted with organized militias in Iraq to bombard American bases. Who was in Iraq at the time, in violation of U.N. orders, to craft more murderous attacks against our troops.

Harris was against taking out the world’s most dangerous and powerful terrorist. Okay, I get it. You and Biden want to cozy up again to the terrorist Iranian regime that shouts “Death to America” at every breath. Such thinking makes you dangerous and naïve, and in the wake of the Middle East peace breaking out and Iran on the ropes, woefully unaware.

But that’s not what makes you small. It’s being petty and vindictive, trivializing the monumental to score a tiny political point.

Harris walked waaaaaay out in the Iraqi desert with her answer just to take a personal shot at President Trump. She didn’t talk about Soleimani. She talked about how during Iran’s response to the killing, some American service members in bunkers suffered, it eventually turned out, traumatic brain injury. “And do you know what Donald Trump dismissed them as? Headaches.” In other words, “See? See? Orange Man is Bad. He doesn’t care about soldiers!” (Let’s put aside the fact early reports did only talked about minor injuries. And no deaths.)

That is such a petty response to a serious global issue. One that diminishes her. She’s more upset at what Trump said than what Soleimani did.

But you have to go further. What actually happened that night? Remember how tense things were between the U.S. and Iran? Google this: US Iran “on the brink”. Trump had said if Iran killed or seriously wounded any Americans in any response to Soleimani’s death, he would unleash hell. But Iran needed to respond to the killing of Gen. Soleimani to save face. Yet it also didn’t want to get in an all-out war with the U.S. So Iran warned the U.S. what was coming. Gave hours for U.S. personnel at Irbil and Al Asad bases to get to shelters. It didn’t aim its missiles at the much more vulnerable base closer to its border. No one was killed.

President Trump spoke of headaches when tensions were high to accept Iran’s clear signal it wanted to de-escalate. Kamala Harris is small because she went out of her way to take Trump’s successful effort to avoid a conflict that could have killed thousands — or blown up into a massive war killing tens of thousands — just for a cheap political shot.

She took the chance to have a serious discussion to demonstrate she has the stature to be Commander-in-Chief, and all she wanted to do was say, “Orange Man Bad.”

Kamala Harris is small. As small as a fly.