Who Made Hollywood Icons Moral Authorities? 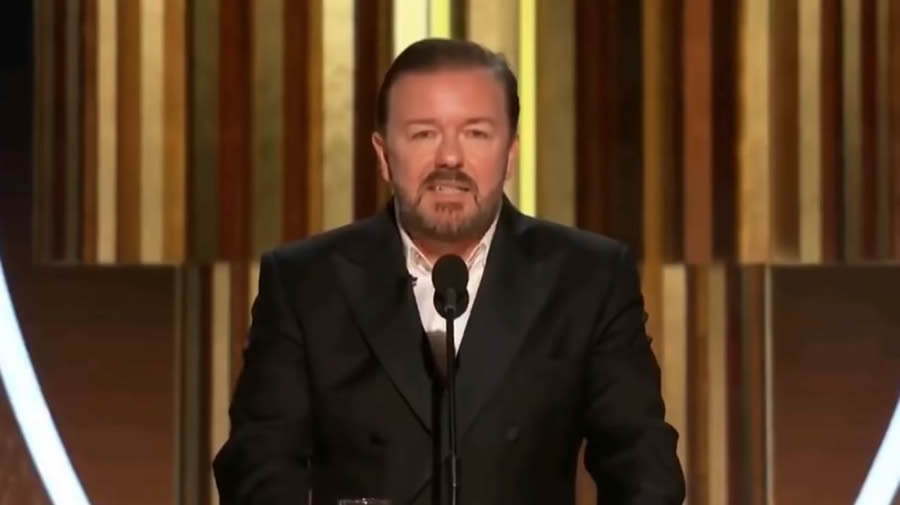 Did you ever stop to wonder who granted moral authority to famous actors and actresses? Did you ever ask yourself why their opinions should carry extra weight? After all, it’s one thing to be a certain person, such as a political leader or an athlete or a cancer survivor and to speak from your experience. It’s another thing to make believe you were that person. How does making believe qualify you to speak?

The Takedown of Woke Hollywood

At the moment, Ricky Gervais’ scathing takedown of woke Hollywood at the Golden Globes Sunday night is getting all the attention it deserves. And, according to Ryan Saavedra, “The reaction to Gervais’ speech appeared to be overwhelmingly positive among people who do not work in the news, media, or entertainment industries.”

But Gervais’ frontal assault on Hollywood hypocrisy begs a deeper question. Why should we even care what Hollywood icons have to say?

We can admire their giftings. (Some of them are incredibly gifted.)

We can appreciate their hard work and, at times, even sacrificial efforts to present memorable moments in film. Some of them go to extreme lengths to play a particular part, immersing themselves in the characters they portray, and viewers benefit from their efforts.

Directors and screenwriters and animators and others also use their skills to produce some amazing movies and shows. And it’s fine to appreciate and respect what they do.

At the same time, none of this qualifies them to be moral authorities, and we should pay no more attention to their opinions than to the opinions of our neighbor next door.

In fact, to some degree, we should pay less attention to their opinions. That’s because some of them are quite immoral personally, not to mention living an elite, ultra-wealthy bubble.

Some have deep personal issues, from emotional struggles to family breakdowns and more.

Why should we say to them, “Please share your views with me on marriage and relationships and the meaning of life”?

Some Hollywood performers are seductresses, baring their bodies for millions to see, becoming objects of lust and sexual fantasy. Should I question my pro-life values because they are pro-abortion? Should this matter to me?

Others glorify violence in the most extreme forms imaginable (or should I say unimaginable)?

People are sliced up or shot up or chopped up. Eyes are ripped out or poked out or pulled out. Human beings, created in the image of God, are torn to pieces or blown to pieces or tortured or maimed or slaughtered. Blood gushes on the screen as heads are torn off and limbs are detached — all for our entertainment.

And to keep our interest, the violence has to become more intense, more graphic, more repulsive.

Why Should We Care?

Yet the very actors who play these murderous roles and the producers who fund these bloody pictures now want to lecture us about gun control or foreign policy. Seriously? To repeat: Why on earth should we care?

Do these icons have the right to express their opinions? Of course they do.

Do they have the right to use their fame as a platform to disseminate their message? Without a doubt.

While listening to an audio course on the French Revolution, I found it interesting that, at one point in 18th century France, the moral credibility of professional actors was deeply questioned. After all, they made their living by pretending to be who they were not. Maybe they are acting now? Who are they, really?

As noted by the author of an article posted on the Ordinary Times (this quote is from the author’s interaction with readers in the comments section): “Society has always been hypocritical with performing artists and this leads to continued disrespect for this day. Actors at various points have been considered no better and often closely linked to prostitutes. Actors were not able to get proper burial in France until the French Revolution abolished the power of the Church to control burials.”

But when it comes to actors today, they are often exalted beyond all measure, as if they could really fly through the air or really had supernatural powers or really were equal to everyone they ever portrayed.

Just as Flawed as Us

The fact is, they are as human as the rest of us and certainly, just as flawed. And while we can appreciate the fine people who are in Hollywood and be thrilled to see a powerful, godly, moral witness that is emerging, let’s stay real.

Hollywood has made billions of dollars on immorality and violence, on mocking God and demeaning people of faith, on sending mixed and even perverted messages.

It’s time that Hollywood preach to itself.

Perhaps Ricky Gervais will start a trend? And perhaps we could pick up where he left off: Yes, you’re a bunch of compromised hypocrites. But there’s good news. Jesus died for people just like you!