What Jackie Robinson’s Heroism Says About White Fragility, and Friendship 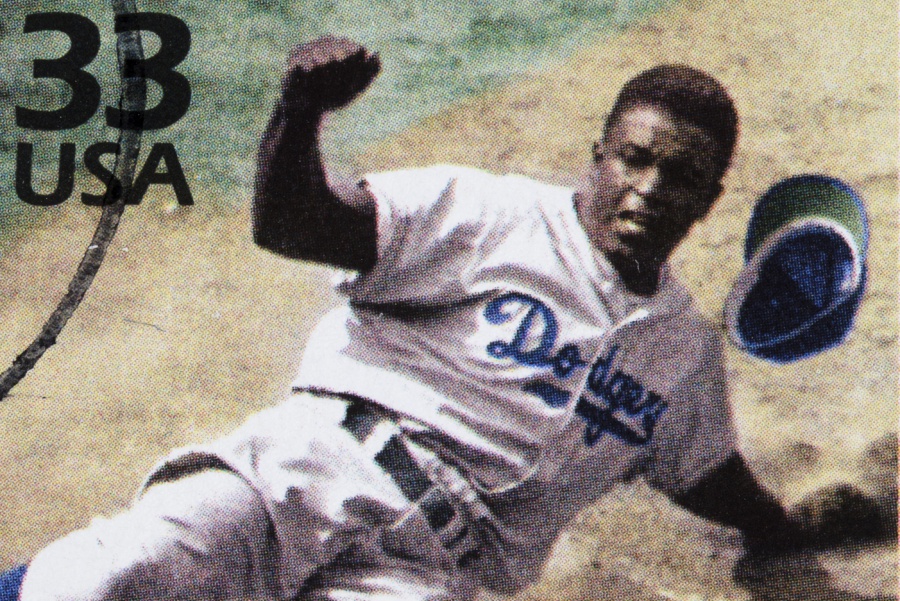 Most Americans think Jackie Robinson was the first black player good enough to play with whites, says Robin DiAngelo in her huge bestseller White Fragility. They don’t know that racist team owners kept black players out of the major leagues. It’s all part of how racist we are. We don’t even know the real story.

What a foolish claim. Every baseball fan knows that. It’s part of the lore of the game. What that fan might not know about is the quality of Robinson’s heroism. He was a great man. A good man, too, but his greatness shines out as an inspiration for what a Christian man should look like.

Branch Rickey, “the Mahatma” as he was called with some grouchy irony, had long wanted to smash the color line in baseball. Blacks could play in the National Football League. Blacks could compete for championships in boxing. But baseball was segregated.

For a related tribute to Henry Aaron, see David Mills’ His Hat Stayed On: To the Great But Under-Appreciated Hank Aaron, on His Birthday.

Everybody knew that blacks could more than hold their own if they got the chance. There were the Negro Leagues, and people could see those players for themselves. Sometimes major league teams would play against Negro League teams in exhibitions. Many people said that Josh Gibson was not just the best catcher they had ever seen: he was the best player they had ever seen, and they said so when a man named Babe Ruth was still around. Ty Cobb, long tagged as baseball’s biggest racist, was one of those. Others said the same of Oscar Charleston. Pitcher Satchel Paige was legendary.

There was no doubt that the best of these guys were as good as the best of the major leaguers. But Rickey did not want just baseball greatness. He did not want his daring move to fail because of human surliness and grudge-holding and vindictiveness, or human exasperation and despair.

Rickey wanted moral greatness too. He had to find just the right man, and he found him in Jackie Robinson. Rickey was a devout Christian, and so was Robinson. Rickey wanted a man who would, morally, turn the other cheek and not respond to anger with anger or to stupidity with ineffectual indignation. He wanted a man who would bear the abuse and not respond in kind, but rather turn desire for vengeance into a determination to play harder, smarter, and more relentlessly on the field. Robinson did all that, and more.

His Hall of Fame Career

I have heard people say that Jackie Robinson’s place in the Hall of Fame is attributable more to his historical significance than to his play on the field. That is nonsense. He won the rookie of the year award in 1947 and placed fifth in the voting for most valuable player. He won that two years later, when he led the league in batting (.342) and the majors in stolen bases (37).

Robinson lost several prime years to racism. His career was therefore a relatively short ten years (1948-1957), so his statistical totals should be increased by half again. But even at that, his lifetime batting average of .311 speaks for itself, with plenty of doubles and triples, some home runs, and (with Richie Ashburn) the best base-running in the league.

As for the glove, James says that Jackie Robinson was brilliant wherever the Dodgers put him in the field: 1B, 2B (his main position), 3B, and OF. If that doesn’t sound impressive, very few players ever make the transition from 2B to 3B, without being marginal at the corner.

Now, Jackie Robinson was not like his African/Italian American teammate, Roy Campanella. Campy dealt with racism by shrugging it cheerfully away. Their teammate Don Newcombe dealt with it by taking to drink, which shot down what looked as if it would be a Hall of Fame career.

Robinson never rolled over. But he also never let anybody dictate to him what he had to say or do. Robinson was a man’s man. He spoke privately with both candidates for president in 1960, and endorsed Richard Nixon. He said that it would make all he had done meaningless if baseball were integrated but the national political parties were segregated.

Baseball has honored Jackie in a way that goes beyond the Hall of Fame. Every team retires certain uniform numbers, worn by the greatest of their players. Only Jackie Robinson has had his number retired for every team. With this wonderful exception: Every year, on April 15, it is Jackie Robinson Day for the whole league, and on that day, every player on every team wears number 42, in Jackie’s honor.

Of course there’s a lot more to say. Integration in baseball did not go smoothly. The Yankees were very slow to integrate, but they were the Yankees and could afford to do as they pleased, until it caught up with them in the mid 1960’s, and they fell into one of their rare doldrums.

My favorite team, the Saint Louis Cardinals, at that time the southernmost team in the league, had been dominant in the 1940’s, but the Dodgers were right on their heels. They would not have a black player as a regular starter until 1958 – Curt Flood. And they gave him a hard time at that. The result was a lost decade. The Cardinals thus punished themselves. They wasted ten years of Stan Musial in his prime.

Jackie Robinson was also a man who made friends, as well as admirers and fans. In what areas of life in America are a white man and a black man most likely to become close, lifelong friends? Sport comes immediately to mind, especially the big three, baseball, football, and basketball. Yet baseball had long been one of the most retrograde of American institutions. It’s an obvious question to ask: What about baseball made such friendships not only possible but entirely common?

We might begin by saying this. Baseball did none of what Robin DiAngelo recommends. The prodigious linguist John McWhorter calls that “white guilt and politesse,” in a scathing article in The Atlantic. How, he asks, can people change “when they have been taught that pretty much anything they say or think is racist and thus antithetical to the good. What end does all this self-mortification serve? Impatient with such questions, DiAngelo insists that ‘wanting to jump over the hard, personal work and get to solutions is a foundation of white fragility. In other words, for DiAngelo, the whole point is the suffering.”

How did baseball create such friendships? Mostly the reverse of what DiAngelo demands.

On the ball field, the troubles of the world are suspended or set aside for the sake of play. The magic “If” of Shakespeare’s wise clown reigns — the “if” that can settle the deadliest of quarrels: if you pretend this, then I will pretend that, and we can go on. Each fresh game “forgets” everything past and everything off the field. They may as well be in another world.

Perhaps some of the virtue of sport has to do with how men win the respect of other men. You get no credit for being a victim. You get no credit for talk. Players hate “clubhouse lawyers.” You get credit for what you do, and when you do it against the odds, against opposition, even your opponents come over to your side, and many men become fast friends after a fair and honest fight. Friendship is the aim, after all, isn’t it?

Anthony Esolen is professor and writer in residence at Magdalen College of the Liberal Arts, in Warner, New Hampshire. Among his many books are Out of the Ashes: Rebuilding American Culture, and Nostalgia: Going Home in a Homeless World, and most recently The Hundredfold: Songs for the Lord. He also serves on the editorial board of Touchstone magazine.