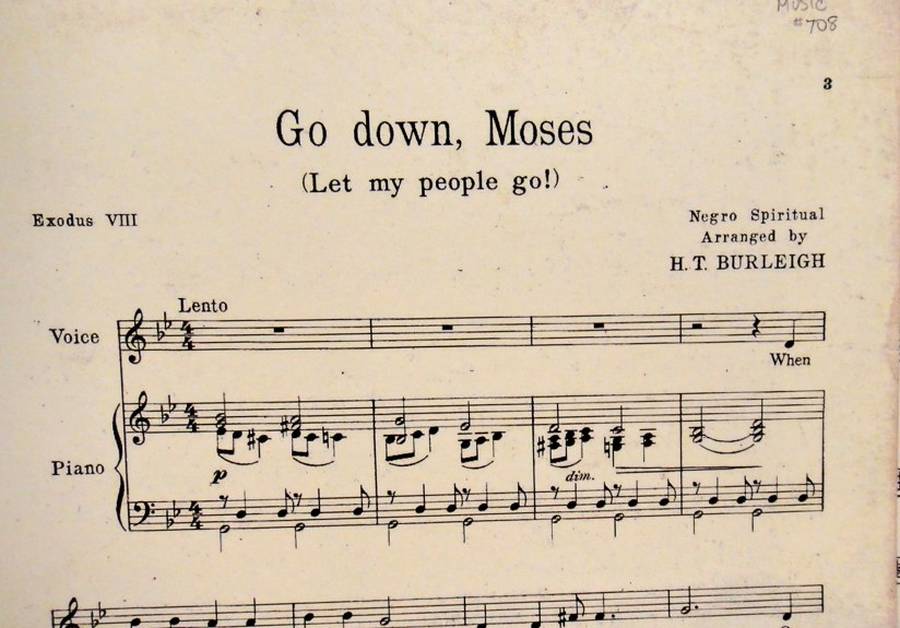 Sheet music for "Go Down Moses (Let My People Go)"

Western Michigan University is grappling with that question after a black student was triggered and suffered a social media meltdown when a predominantly white choir sang “Wade in the Water.”

“So apparently Western Michigan University thinks it’s ok for WHITE peoples to sing negro spirituals while the instructor talking bout ‘these songs don’t belong to one race.’ They sure as hell DO,” WMU music major Shaylee Faught wrote on a social media now seen by more than 1 million people.

Faught got triggered after the choir’s black conductor reportedly told the audience that the selections were “American songs” performed “for everyone” and “have no ethnicity.”

The performance, “Spirituals: From Ship to Shore,” included songs like “Go Down, Moses” and “Wade in the Water.”

Well, faster than you could say Zip-a-Dee-Doo-Dah, nearly the entire campus suffered a meltdown.

“We as a collective are appalling that this took place on our campus,” The Black Student Union wrote in a statement. “This act is a further example and reflection of the racial insensitivity and ignorance that has been allowed to occur on Western Michigan’s campus.”

The BSU called for “racial re-education on sensitivity training and cultural competence.”

I have no idea what that means but it sounds like one of Bernie Sanders’ gulags.

University leaders released a statement to WKZO expressing their grave concerns over the matter.

“This student’s perspective is real and it is important,” they wrote. “It is one among many different perspectives.”

John Wesley Wright, who is a renowned conductor and professor, told the Western Herald that he has no idea why the student got triggered and he has no reason to apologize.

“I just got off the phone with the bass from ‘Sweet Honey in The Rock,’ (an African-American a cappella ensemble) and her first question was, ‘Has anyone looked into the mental health of the people who made those comments,’” he told the newspaper.

The professor’s comment set off the Western Student Association who condemned the “insidious nature of cultural appropriation.”

“When the director is more concerned with investigating the mental health of a student rather than empathetically responding to concerns of students, it further illustrates that student’s voices do not matter,” they wrote in a statement to the newspaper. “We do not and will not tolerate these inappropriate responses.”

The snowflakes who run the Black Student Union demanded an apology from the School of Music.

“To decrease the likelihood of events like this happening in the future, we demand that whatever culture, race, or ethnicity is being represented must be consulted before the show,” the BSU wrote.

In other words, the choir may want to take a pass on that Spring concert medley featuring the works of Dr. Dre and Lil Nasty.