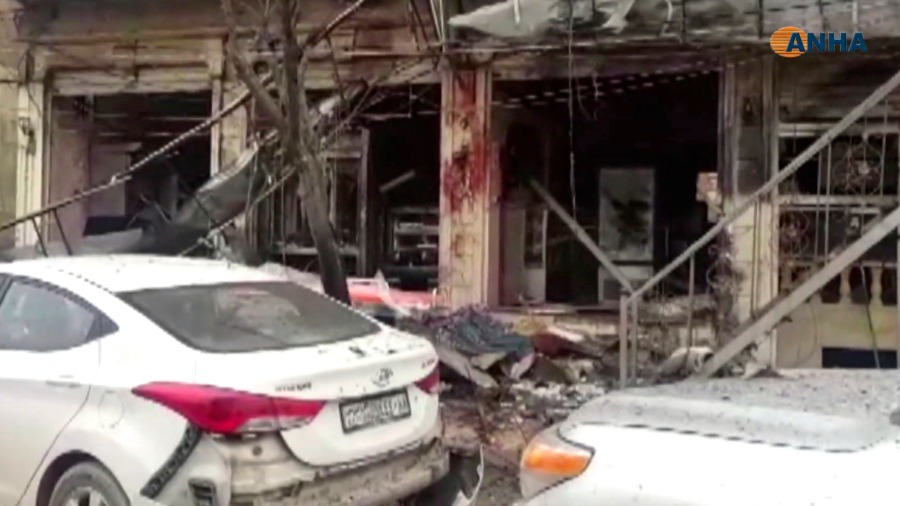 The Bee published this article even as Turkey shelled Christian civilians. Imagine a Middle Eastern Christian satirist publishing a piece that made light of the victims of the World Trade Center attacks. And doing it while the Towers were still burning, on September 11, 2001.

Of course, that never happened. More to the point, it never would.

But what’s unthinkable to the persecuted minorities of the Middle East? It’s quite commonplace among the bloated, self-amusing Christians of the West.

Is there anything more abhorrent than the sadistic violence of jihadists like ISIS and their ally Turkey? Maybe the malevolent, self-tickling joy that only seems to be found among weak, spiritless Western Christians.

President Trump’s decision to pull out our brave men aside has proved disastrous. Turkish President Erdogan is making a killing field of Syrian Kurdistan. Since the moment I learned of the pullout, I’ve been haunted by a film project I had a hand in creating back in 2015.

Sing a Little Louder from KingdomWorks Studios on Vimeo.

The Church by the Tracks to the Death Camp

The short film “Sing a Little Louder” tells the true story of an elderly German tormented by a childhood memory. One Sunday, while his congregation worshiped, a train had stalled for several minutes just outside their church.

The train was filled with Jewish victims of the Nazi regime. They were headed for a death camp. Nazi officers ordered the conductor and engineers to get the train back up and running. Meanwhile, the desperate passengers cried out for help.

And how did the pastor and congregation respond from inside the church? With the hideous, paper-thin joy that can only be fabricated from pages ripped out of Christian Scripture and Tradition.

As the cries of the Jewish prisoners increased in intensity, all the more stridently did the pastor lead his congregation in a joyful hymn. “Sing a little louder!”

As the cries of the Jewish prisoners increased in intensity, all the more stridently did the pastor lead his congregation in a joyful hymn.

The train roared back to life and moved along on its way to the slaughterhouse. And the congregation finished their hymn, and breathed a sigh of relief.

The victims of this month’s slaughter (many of them Christian) had been the survivors of years and years of persecution. They are the same people who’d been hunted, killed, tortured, and raped by ISIS. Who suffered until Kurdish forces beat the jihadists back, imprisoned them, and took on the task of guarding the region’s endangered minorities.

For days my Kurdish friends on the ground in Syria sent me live updates about these victims of the Turkish invasion.

So My Children Will Not Be Ashamed

I spoke up in many places, including The Stream, to decry the Trump administration’s abandonment of our allies. Even as I advocated for the vulnerable overseas, I thought of my own children.

Even if all else is lost, at the very least I want to be in radical solidarity with the vulnerable for the sake of my posterity.

I want my children to know: I’d rather suffer an injustice than look on passively as the innocent suffer. And as I often remind my children, I would rather our posterity die in a concentration camp than guard one. I’d rather their bodies be destroyed than their souls.

When I came on board as co-executive producer of “Sing a Little Louder,” I wrote a small postscript that shows while the credits roll. I wanted to reference all the 20th century’s genocides up to the current one, that is, the attack on against minorities in the Nineveh Plains of Iraq, and in northeast Syria.

I wrote it that way to make clear that this film isn’t just virtue-signaling against Germans from the safe distance of many decades. Instead, it’s a warning. You and I are in the same exact position those German Christians were in. And civilization, our civilization, has shrugged time and time again as the defenseless fell into an earthly hell.

Genocide in Our Time

The 20th century opened with genocides we did nothing to prevent.

The 21st century opened with ISIS, and many did nothing. Now ISIS’s ally Turkey is continuing the genocide where they left off.

Those children — perhaps your children — will one day be tormented by a childhood memory. One just as dreadful as the one depicted in my film project.

In October 2019, President Donald Trump ordered our men a convenient 12 miles away to make way for a Turkish continuation of ISIS’s slaughter.

And here’s how many American Christians responded: “Laugh a little louder.” Jason Jones visiting with Kurdish fighters against ISIS in 2017.