Where Was God When California Burned? 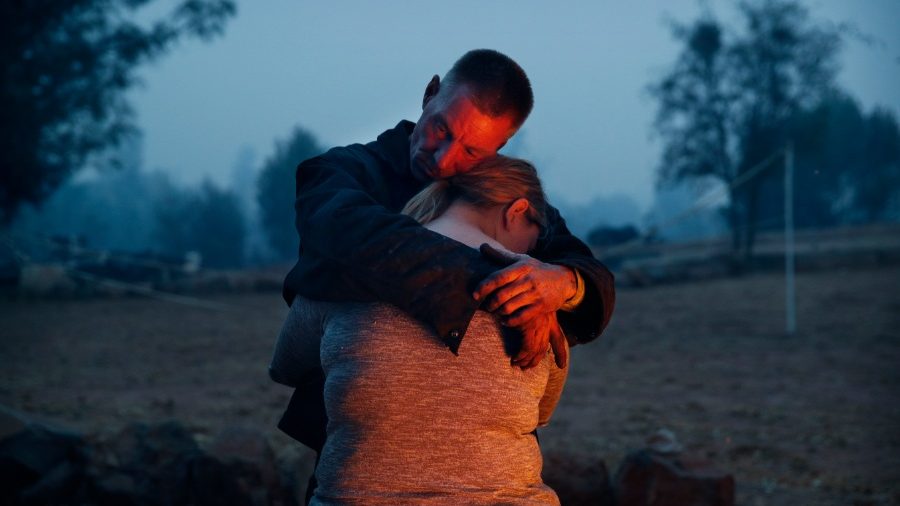 In this Nov. 14, 2018, photo, Phillip Harvey embraces his daughter Arianne Harvey as they stay warm beside a fire in Paradise, California. The family lost their home in the Camp Fire. Afterwards they moved into an RV on the property and then moved to stay with friends.

The magnitude of the recent California forest fires tragedy is staggering. As of this writing, the confirmed number of dead is more than 80 and the number still missing almost 700.

That means at least 80 people were burned alive in the blazing inferno. Wrap your mind around that for a moment, if you can.

And it’s possible that number could double. Or triple. Or quadruple. Or more. Much more.

Young and old wiped out in a moment of time. Families torn apart forever in this world. Your very worst nightmare replayed over and over again.

What a terrible, terrible tragedy. What an unspeakable disaster.

And along with the loss of life, there is the loss of property, with thousands of homes totally destroyed.

Where was God during this season of devastation and loss?

While we grieve with the survivors and their families, how do we explain such calamities?

I humbly suggest that this is not the time for cheap answers or frivolous speculation. Do you agree?

There are some devout people of faith (including Jews, Christians, and Muslims) who believe that everything that happens is ordained by God for a purpose, however mysterious that purpose might be. Nothing that happens is random, and even acts of human evil have some level of divine rationale, since God does not, in fact, stop the acts.

While this is not my own perspective, I do respect this as a posture of serious faith, echoing the plaintive words of Abraham, “Shall not the Judge of all the earth do right?” (See Genesis 18:25.)

If you are a religious Jew, the first thing you say upon hearing of a death is, “Blessed are You, Lord our God, King of the Universe, the righteous Judge.”

You acknowledge that only God gives life and takes life, hence your first response is one of worship.

Similarly, Calvinist Christians would readily echo the words of Job. He responded to the loss of all his possessions, and, infinitely more importantly, the loss of all his 10 children, with these words: “Naked I came from my mother’s womb, and naked shall I return. The LORD gave, and the LORD has taken away; blessed be the name of the LORD” (Job 1:21).

Committed Muslims as well would acknowledge that whatever happens is Allah’s will, be it a forest fire or a glorious sunset.

Again, I respect this faith perspective, and I understand the scriptural arguments behind it. I’m just not ready to say that these terrible forest fires happened simply because God decreed they would happen.

After all, there was a terrible storm one day when Jesus was in the boat with His disciples, but He rebuked the wind and the waves, saying, “Peace be still!” Did Jesus rebuke what His Father willed? That makes very little sense. (See Mark 4:35-40.)

Some Christians see all natural disasters as acts of divine judgment, quickly pointing the finger at the sin of California.

If that is your personal view, may I ask if you’d feel the same if your church-going grandparents were among the dead? Would you be so quick to pronounce judgment if your best friend was killed?

I fully accept that God does send judgment into the earth, right until this day. And I recognize that, when a nation sins, the innocent will suffer as well. And surely our sins, as a nation, are great.

I simply urge you to think twice (or, perhaps twenty or thirty times) before deciding that you know the will of the Lord in this situation. Sometimes silence really is golden.

The Devil Who Kills?

Others believe that it is the devil alone who kills and destroys, pointing to his murderous acts in Job 1 and 2 (although with divine permission), saying that he is the one behind tragedies like this (see John 8:44, which speaks of his evil nature).

But it is an odd theology which believes that Satan has this kind of power and yet depicts the all-powerful God as merely sitting idly by. Is this the God of the Bible?

And that brings us full circle to our fundamental question: What was the Lord doing when California burned?

Some would say this is a human issue, not a divine issue, since the Lord has given us free will and our choices have serious consequences.

Accordingly, some on the left would blame the right for not paying attention to man-made climate change, pointing to the negative effect this is having on the environment. As one story claims, “As the world warms, we can expect more wildfires.”

Conversely, some on the right would blame extreme environmentalists for blocking the proper treatment of the forests, leading directly to the tragedy. In the words of Interior Secretary Ryan Zinke, “I will lay this on the foot of those environmental radicals that have prevented us from managing the forests for years and, you know what, this is on them.”

So, is this a man-made disaster rather than a God-ordained (or Satan-inspired) disaster?

Putting Our Hands Over Our Mouths and Praying

Barring definitive information on the ground or divine revelation (including indisputable scriptural insight) from above, I recommend putting our hands over our mouths and praying. The losses are just too great and the agony too acute to sit in the comfort of our homes and speculate.

But that doesn’t mean that we have nothing to say, and it is Jesus Himself who shows us the way to move forward.

We read in John 9 that, when Jesus’ disciples saw a man born blind, they asked Him who sinned, the man or his parents. (In some ancient Jewish teaching, it was believed that you could sin in the womb, explaining how the disciples thought that, perhaps, the man was responsible for his own blindness.)

How did the Lord reply?

“Neither this man nor his parents sinned,” Jesus answered. “This came about so that God’s works might be displayed in him. We must do the works of Him who sent Me while it is day. Night is coming when no one can work. As long as I am in the world, I am the light of the world.” (John 9:3-5; see also John 11:1-4 for a parallel perspective.)

Do you grasp the significance of His words?

God Can Be Glorified

While Jesus does say that neither the man nor his parents were responsible for his blindness, He does not give a clear explanation of why the man was born blind. Instead, He states that this happened “so that God’s works might be displayed in him.”

I can’t tell you why this happened, but I can tell you that, in the midst of the agony and devastation, God can be glorified.

And so, we can look into the eyes of the suffering and grieving and say, “I can’t tell you why this happened, but I can tell you that, in the midst of the agony and devastation, God can be glorified. Let’s work together with Him to bring light out of darkness, life out of death, and hope out of despair.”

As impossible as it seems, as acute as the pain may be, and recognizing that nothing will bring back those who have perished, with the Lord greater good can come out of these tragic fires. Let us pursue that greater good with Him.

(For a radio show devoted to this topic, go here.)