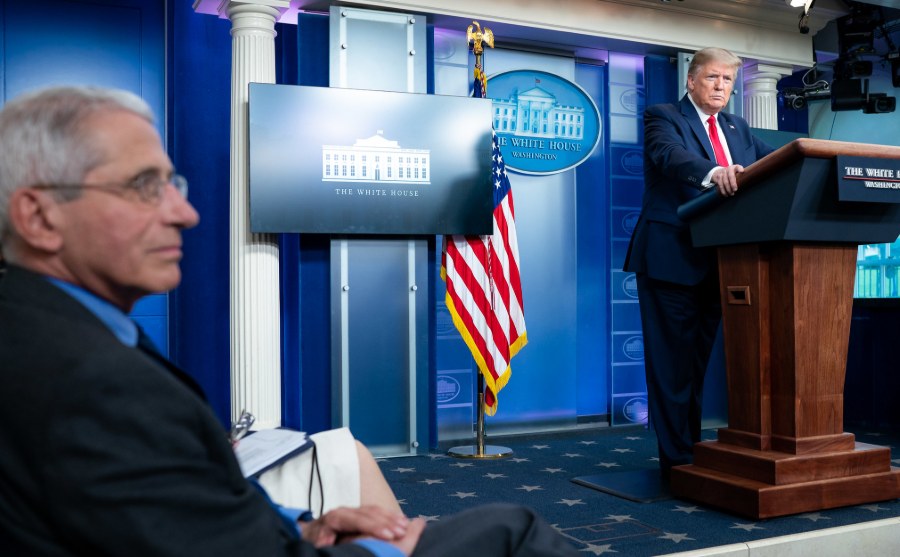 I don’t know what happens behind closed doors in the White House. I don’t know the true nature of the relationship between Dr. Anthony Fauci and President Trump. I do know when the media blows a story up, making a mountain out of a molehill.

I’m speaking specifically about the idea that Fauci threw the president under the bus on CNN on Easter Sunday night. This really is a tempest in a teapot.

If you don’t believe me, watch the actual footage of Jake Tapper’s interview with Dr. Fauci (see here for my related video commentary).

Tapper first contrasts S. Korea’s successful response to the virus with America’s, asking if we could have done better.

Fauci responds by saying that the situation there was very different than here and so a fair comparison cannot be made.

Tapper then asks if more lives could have been saved had we responded more quickly to the warnings.

For a second time, Fauci is not-committal, saying there are lots of factors that go into making decisions about how to respond to something like this.

Tapper then presses the question a third time, with very little variation.

Fauci is still reluctant to say that lives could have been saved had we acted earlier, given all the dynamics that go into make these decisions. But he does admit that, had we taken more radical steps earlier on, then lives could have theoretically been saved.

Here are the most relevant parts of the transcript of the interview:

TAPPER: Sanjay Gupta said that’s — this is all because we got started too late in the U.S. Is that right? Do you agree?

FAUCI: You know, it isn’t as simple as that, Jake. I’m sorry.

So, Fauci doesn’t take the bait.

TAPPER: The New York Times reported yesterday that you and other top officials wanted to recommend social and physical distancing guidelines to President Trump as far back as the third week of February, but the administration didn’t announce such guidelines to the American public until March 16, almost a month later. Why?

FAUCI: You know, Jake, as I have said many times, we look at it from a pure health standpoint. We make a recommendation. Often, the recommendation is taken. Sometimes, it’s not. But we — it is what it is. We are where we are right now.

Again, he does not take the bait.

TAPPER: Do you think lives could have been saved if social distancing, physical distancing, stay-at-home measures had started third week of February, instead of mid-March?

FAUCI: You know, Jake, again, it’s the what would have, what could have.

It’s — it’s very difficult to go back and say that. I mean, obviously, you could logically say, that if you had a process that was ongoing, and you started mitigation earlier, you could have saved lives. Obviously, no one is going to deny that.

But what goes into those kinds of decisions is — is complicated. But you’re right. I mean, obviously, if we had, right from the very beginning, shut everything down, it may have been a little bit different.

But there was a lot of pushback about shutting things down back then.

And that was it. The interview then continued along other lines, including a discussion about the place of faith alongside science.

Yet within minutes of the interview, headlines were ablaze, announcing Fauci’s betrayal of the president. Then, within a day, the internet was abuzz with news that Trump had retweeted a “Fire Fauci” tweet.

Things intensified so quickly that the lead headline on the Drudge Report for much of Monday pictured the face of Trump with a large caption beneath (in red, no less), reading: FIRE FAUCI?

Fire Fauci for what?

There are even memes going around now claiming that Fauci is using demonic hand signals. (See again my video commentary for the graphic in question.) What kind of nonsense is this?

Fauci answered Tapper honestly and diplomatically, and he certainly didn’t throw Trump under the bus (in contrast with an April 11 article from the New York Times.)

And even if Trump could have responded more quickly in some ways, the entire process is highly complex. Sweden is now cracking down after first adopting a more liberal policy, with the prime minister admitting that the initial procedures were “not good enough.” And Dr. Fauci himself has modified his views, as a Breitbart headline was eager to announce.

Then, on February 26, he said, “Right now, at this moment, there is no need to change anything that you’re doing on a day-by-day basis. Right now the risk is still low, but this could change.”

Fauci also explained that he and his colleagues initially received false information about how contagious the virus was, perhaps intentionally from China. This colored some of their earliest responses.

The bottom line is that this has been a highly volatile situation with lots of moving parts and hundreds of angles to consider. And Dr. Fauci has been an important part of Trump’s team, whether or not his advice has always been correct.

We Can Do Better Than This

It is highly dishonest, then, for the media to create some massive rift between them, in particular, based on the Tapper-Fauci interview. That is simply fake news.

What is even more regrettable is that millions of Americans, especially ardent Trump supporters, now believe the very worst about Dr. Fauci.

Surely, we can do better than this.

As people of conscience, not to mention people of Judeo-Christian moral convictions, we must.