A Lefty, Out-of-State Professor Explains Arizona’s Senate Race — And Gets It Wrong 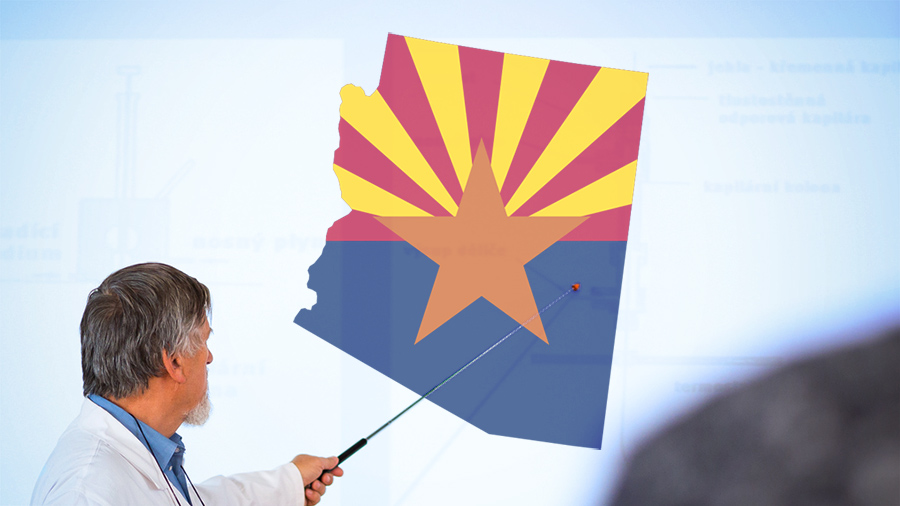 Political scientist John A. Tures claims popular sheriff Joe Arpaio can’t win the election for Arizona’s open seat in the U.S. Senate. He thinks the Democrats will probably take it no matter who the Republicans nominate. The red state will start turning blue.

We’ve heard this before. As a long-time politically active resident of the state, let me tell you: He’s wrong.

Tures, who teaches at LaGrange College in Georgia, opines in the New York Observer on the race to replace the seat being vacated at the end of the year by GOP senator Jeff Flake. (President Trump’s son-in-law Jared Kushner owns the Observer, but it mixes liberal and conservative writers.) The weekly newspaper titled the piece “Even Joe Arpaio Can’t Keep Arizona Republican.”

Okay, no. Democrats have the uphill battle. Every couple of years, the party and the national media predict that Arizona will turn partially blue, and every time the results prove them wrong. Arizona is pretty red. Tures claims the state “is weakening as a stronghold for Republicans.” He doesn’t really back this up.

What’s Tures’ argument? Hillary Clinton “narrowly” lost the state 45.5 percent to 49 percent. That’s not a very narrow margin in a presidential race, especially with a Republican candidate many conservatives opposed. Throw in Libertarian Gary Johnson’s 4 percent and the right had an even bigger margin of victory.

What’s the real evidence? The GOP controls both houses of the state legislature, all 11 statewide offices, both U.S. Senate seats and four of the eight U.S. House seats. This past year, Guns & Ammo ranked it the No. 1 state in the country for Second Amendment-friendly laws. Americans United for Life ranked it No. 1 for pro-life laws.

With the exception of a few House districts gerrymandered to elect Democrats, it’s hard to turn seats blue. Democrat Ann Kirkpatrick thought she could defeat GOP Sen. John McCain in 2016, and left her fairly safe House seat to challenge him. She lost big, 53 to 40 percent.

What about the state’s “moderate Republican” senators? Arizona tolerates John McCain in part because of his connection to Arizona’s late Barry Goldwater. McCain took Goldwater’s Senate seat after he retired. He has tried to emulate him in several ways. The American Conservative Union gives him a lifetime rating of 82 (out of 100). Flake has a lifetime rating of 97. He was also the first director of the Goldwater Institute before entering Congress.

Tures claims that the frontrunner until Arpaio entered the race, conservative Kelli Ward, could be defeated by the likely Democratic candidate, Rep. Kyrsten Sinema. Ward’s “attacks on McCain will be remembered by citizens who love their longtime senator,” he says.

Well, Arizonans have a love-hate relationship with McCain. They respect his years of military service and as a P.O.W., but they don’t really like him. He’s known for his down and dirty political tactics and bad temper. He’s distrusted for purging the party of conservatives. One of the main conservative blogs in Arizona just wrote a post referencing his terminal brain cancer entitled “McCain: Incapable of doing job, lacks grace to retire.” With McCain not in the race, most voters won’t care about Ward’s previous criticism of him.

The likely Democratic nominee, Kyrsten Sinema, was once given the Vladimir I. Lenin award by the Arizona Taxpayers’ Association while serving in the state legislature for having the most far left voting record.

Tures cherrypicks a poll that has Sinema leading Ward by seven points in the general election. It was done by the moderate polling company High Ground, which doesn’t look favorably on conservative candidates like Ward. Other polls show them tied within the margin of error. One has Ward leading by one point.

The liberal Sinema has portrayed herself as a moderate in recent years. How not-conservative is she?Even now, after years of being a “moderate,” her ACU lifetime rating is a solidly low liberal score of 15. The Arizona Taxpayers’ Association once gave her their Vladimir I. Lenin award for for having the most far left voting record in the state legislature.

Tures plays into the dishonest picture of Ward created by her former opponent McCain’s supporters. He says she held a townhall to discuss whether chemtrails were poisoning Americans, earning her the nickname “Chemtrail Kelli.” Tures wants to picture her as a crank who can’t win a state-wide election.

The reality is, she brought in two employees from the Arizona Department of Environmental Quality to refute the notion. The irony? McCain once told a constituent he would look into the man’s concerns about chemtrails. If anything, he deserves the nickname “Chemtrail McCain.”

Tures mentions former congressmen Matt Salmon and Ben Quayle as potential candidates who might beat Ward for the nomination. Quayle was beat after only one term in office, the only incumbent freshman GOP representative to lose reelection in 2012. He won’t seriously challenge Ward. Salmon served two sets of terms in the House, easily winning reelection. He would be a formidable candidate, but Arizona insiders think he won’t run.

Now we get to the current star of Arizona politics, controversial former sheriff Joe Arpaio. Tures calls him a “liability” after his legal battles with the federal government. However, many Arizonans know the Obama administration targeted him for combatting illegal immigration. The nationally renowned sheriff lost reelection as Maricopa County Sheriff because left-wing billionaire George Soros poured $2 million into the race to defeat him.

Tures doesn’t even get the Democrats’ side right. He describes Deedra Abboud, an attorney and Muslim-American activist, as a credible threat to Sinema in the Democratic primary. She’s not. Abboud has virtually no statewide name recognition. The Democratic Party is subtly throwing its support behind Sinema.

The real story in the race is that with Arpaio entering the race, he splits the conservative base vote with Ward in the primary, leaving GOP Rep. Martha McSally to do fairly well with the moderates.

The real story in the race is that in the primary Arpaio splits the conservative base vote with Ward. GOP Rep. Martha McSally will do well with the moderates. She’s the only other strong candidate in the race. She has compiled a dismal 67 percent lifetime rating with the American Conservative Union, even worse than McCain’s 81 rating.

Arizona isn’t likely to vote blue in this senate election. It’s still a pretty safe Republican seat. But with the battle between Ward and Arpaio for the conservative vote, the state might end up with another “moderate” Republican senator. One even more liberal than John McCain. That’s not blue, but it’s not pure red either.

Arizona Voters: You are Being Duped by the Kyrsten Sinema Campaign

The Trainwreck That is Kyrsten Sinema