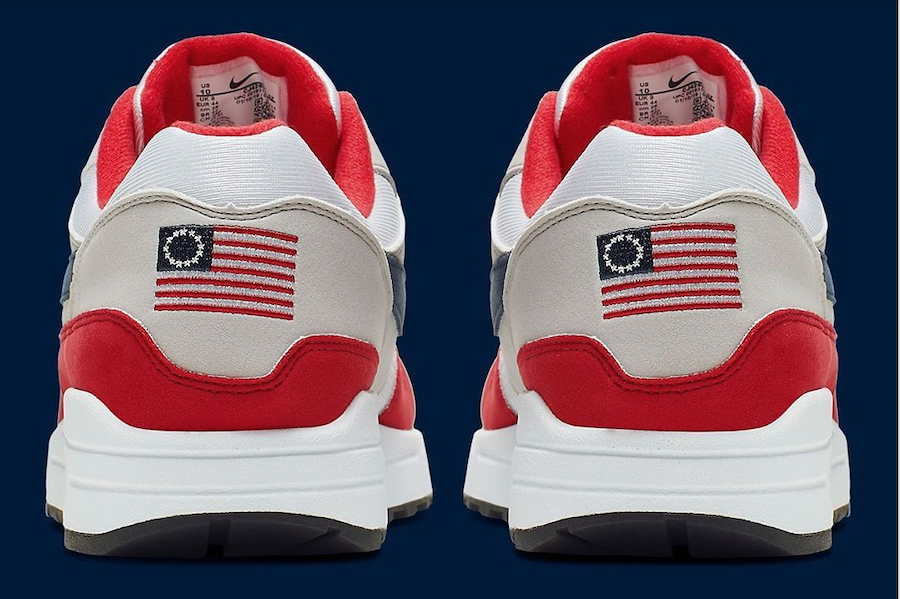 America-hating Colin Kaepernick convinced Nike to drop it from one of their shoe designs. Was it an offensive racist symbol? Was it something else the company shouldn’t endorse?

No. The former NFL quarterback and Nike spokesman found intolerable … the so-called Betsy Ross flag. The United States’ first flag. The one that symbolized the new country that declared to the world, “We hold these truths to be self-evident, that all men are created equal.”

Nike’s Air Max 1 USA was meant to be released on the Fourth of July. Apparently, Kaepernick had a problem with the design because when Betsy Ross created the flag, the colonists held slaves. As the newly independent Americans, located primarily in the South, would for another 86 years, until President Lincoln issued the Emancipation Proclamation.

The Betsy Ross flag looks very similar to the modern day American flag. It has the red and white stripes. The most noticeable difference is that it has 13 white stars in a circle on a blue background, instead of the 50 stars in nine rows of the modern flag. There are only 13 stars, because at the time there were only 13 colonies.

Kaepernick may have had a little excuse. Or maybe he didn’t. Some white supremacist groups, like Identity Evropa, reportedly use the flag to symbolize their desire to return to the good old days. The evidence for this seems sketchy. Even if they did, all Kaepernick did was go along with their co-opting of the flag. He conceded a symbol of liberty to the villains.

Colin Kaepernick reached out to Nike saying that he and others felt the Betsy Ross flag is an offensive symbol because of its connection to an era of slavery https://t.co/6Y2mIlbAuT

But many patriotic groups also use the flag. It symbolizes their identification with the American revolutionaries. It is similar to their use of the Gadsden “Don’t tread on me” flag, which also comes from the Revolutionary War era.

It’s not even certain that Ross designed the flag. She sewed flags for many occasions, producing uniforms, tents and flags for Continental forces. Ross’s grandson, William J. Canby, told the Historical Society of Pennsylvania in 1870 that his grandmother made the first flag of the U.S. He got this information from his aunt 20 years after Ross died. He said George Washington brought Ross a drawing of the flag in 1776. She altered the design slightly by replacing the six-pointed stars with five-pointed ones.

Kaepernick’s ill-directed protest gets worse. First, if she did sew the flag, Ross didn’t support slavery. She was a Quaker, a pacifistic religious group that opposed slavery.

Second, the Betsy Ross flag is often displayed at presidential inaugurations. It was prominently displayed at both of — guess what? — President Barack Obama’s inaugurations. Does Kaepernick think he was a racist? That he identified with white supremacist groups? That he endorsed slavery because people who flew that flag had slaves?

Did he really think about this? Or was he just reacting for the cameras?

More sensible Americans reacted. Arizona governor Doug Ducey tweeted that he would be pulling financial incentives for Nike to open up a plant in that state. He said, “Arizona’s economy is doing just fine without Nike. We don’t need to suck up to companies that consciously denigrate our nation’s history.”

A Tennessee minor league team drew a Betsy Ross flag on the infield before their last game. A veteran-owned company released a Betsy Ross flag T-shirt. Meanwhile, at the Betsy Ross house in Philadelphia on July 4, 13 children became citizens.

It’s a good thing @Nike only wants to sell sneakers to people who hate the American flag…. @NFL #HappyFourth https://t.co/G6w8vDjvLP

Where Will it End?

It’s unfair to let white supremacists and Kaepernick dictate the meaning of the Betsy Ross flag. For 250 years, everyone has viewed it as a symbol of the wonderful things about this country. To use the logic of these new haters, everything from that era must be ditched because it was during the era of slavery. Take the Founding Fathers off our currency.

Christine Flowers, writing for The Philadelphia Enquirer, observes, “maybe we should just rip every identifying characteristic off every building, thoroughfare, park, waterway, church, school and every other object that existed before the 13th Amendment was passed, because it all predates the time when America eradicated its original sin.”

Just so you know how this works now: Nothing can happen in America anymore if Colin Kaepernick doesn't like it. And in case you hadn't noticed, there's a lot Colin… #ColinKaepernick https://t.co/ssMY8qa6mW

And why stop there? Why not let the white supremacists appropriate the modern day American flag too, since it existed during the Jim Crow era? It’s only a later version of the Betsy Ross flag. How about the cross? Since the KKK uses the cross as one of its symbols, burning it, should we ban the cross? Dismantle all of Arlington National Cemetery?

There are other symbols that truly represent the hateful era of the past, such as the KKK’s white uniform. Let those symbols continue to represent that era, not our flag.