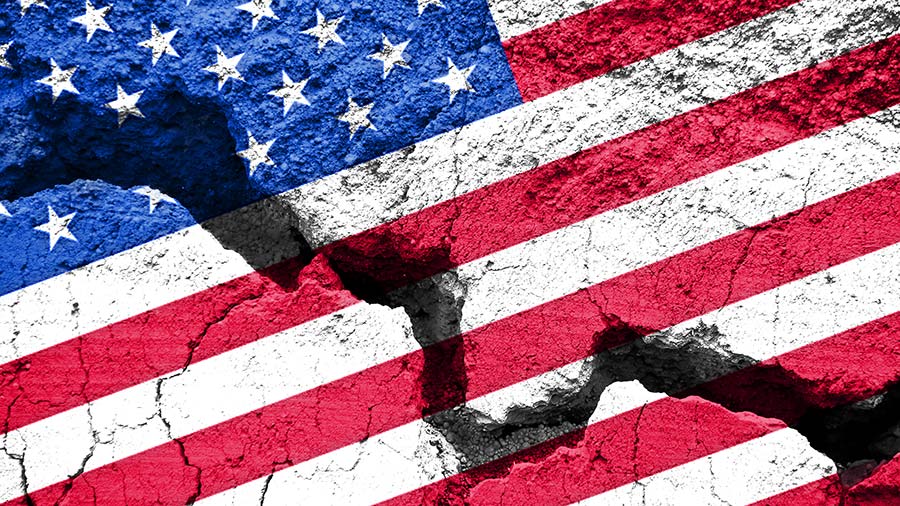 It seems like a bad time to tell you about may latest film project. But in fact Divided Hearts of America couldn’t come at a more fitting moment. Its goal is to unearth the founding truths on which our country is built. And to challenge the dehumanizing lies that pit black against white, rich against poor, and mothers against their babies.

This is a hellish time for our country. I don’t mean that figuratively, but literally. Forces are loose in our streets and in our hearts that recall Dostoevsky’s prophetic novel, The Possessed. That profound Christian author saw what comes when our souls are in disorder, and we live far from God. As walking wounded, we’re vulnerable to passions of the moment. To mindless tribal divisions. But most of all to pseudo-intellectual actions plans, or ideologies. The kind of gibberish you hear online from Antifa, or white nationalists.

A Half-Baked Idea with a Fully-Loaded Gun

“Ideology” doesn’t just mean “a worldview.” It refers to a half-baked idea with a fully-loaded gun. Political philosophers Eric Voegelin and Russell Kirk analyzed ideologies as substitute religions, truncated or dishonest visions of man that paper over their own flaws by threatening critics with violence.

How did we get here, to a place where fascist lockdowns only lift to make way for Marxist riots?

We forgot who we are. Forgot both what it means to be human beings, and to be Americans. We’ve walked consistently away from the founding vision of these United States. As Robert Reilly shows in his brilliant new book, America on Trial, that vision was clear and consistent. It was the human person as the image and likeness of God, Whose law we can know via reason, and enact in just laws and free institutions.

That vision grew organically from the philosophy of Greece, the institutions of Rome, and the revelation granted man via Israel, then passed on by the Church. The vision got clouded in the Renaissance by new skepticism about the power of reason, and the rising cult of the Divine Right of Kings. Sophists like Machiavelli whispered to princes the question, “What is truth?” Then urged them to crush their opponents, toss their liberties on the trash heap of history. Sound familiar?

But Christians in Britain like Richard Hooker revived the great tradition, citing the best medieval arguments and biblical precedents. Then they passed that on to those pioneers who settled the 13 colonies.

We forgot who we are. Forgot both what it means to be human beings, and to be Americans.

The American founding was a bold and risky enterprise on the part of men who risked not just their lives but their families. Hundreds of orthodox Christians joined a couple of Deists in drafting and approving the Declaration and Constitution. They knew that America wasn’t perfect. It still bore the stain of slavery that marked almost every society in human history. Unlike those states, America aspired to something more. It sought perfection, not merely power. It affirmed eternal truths, and moved inexorably closer to realizing them. That’s why slaveowners lived for sixty years in ever increasing terror that their institution was doomed. It’s why they tore America apart, rather than see it threatened.

The first brutal contradiction of America’s founding principle we faced, and barely survived, was slavery. The next grew out of it: the ugly, dehumanizing segregation white Americans imposed on the freedmen. While our founding documents, and the great 14th Amendment, affirmed the true vision of man, little men found means to evade that. They stuffed ballot boxes, denied black citizens guns, and finally stole even their votes. It took another hundred years, and the Christian witness of Rev. Martin Luther King, Jr., to finally shame Americans into living up to their ancestors’ promises.

War in the Womb

But what the devil yielded with his right hand, he took back with his left. The Civil Rights Movement was a great moment in the triumph of Christianity in America. That didn’t last. The father of lies, a “murderer” moved his war to another front. He spread the lie in the culture that the family, marriage, and the bond between mother and child weren’t natural and good, God’s means for protecting the vulnerable and raising children right. No, they were “oppressive” institutions and young people must “liberate” themselves from them as well, and “follow their bliss.”

Elites with racist heritages stepped forward to make that possible. To offer quick, “safe” abortions that cleared “unwanted” children out of the way and filled America’s poor neighborhoods with clinics that made that easy. Or made it look easy, anyway.

Movie To Movement’s mission is to promote the beauty of the human person through the power of film and stand alongside the vulnerable: from the child in the womb to the child in Chinese-occupied East Turkistan.

What divides us has always been our failure to live up to the noble vision of our founding, a Republic grounded on the truth of the human person as a creature made in the Image and likeness of God. What will unite us is a renewed commitment to work together to leave our children a culture of life, love and beauty.