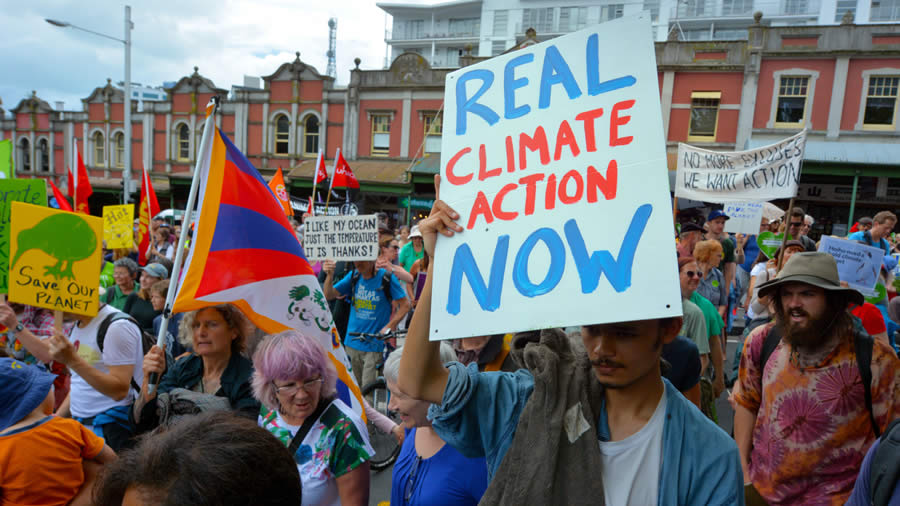 In this Nov. 28, 2015, file photo, thousands rally for action on climate change in New Zealand.

Editor’s Note: This article is the fourth of a five-part series on climate change. You can read Part 1 here, Part 2 here, and Part 3 here.

So that brings us to the final question: What should we do?

The two main options discussed by policymakers are these: we either mitigate, or we adapt.

Mitigation: The Expensive Sense That We’re Doing Something

Most environmental activists believe the best approach is mitigation. So do many of our political leaders. Mitigation means to take action that will reduce or erase the severity of global climate change. Mitigation is the principle behind, for example, the “Green New Deal,” promoted by some progressive politicians.

It’s easy to understand why mitigation appeals to people. It gives us agency, the sense that we are doing something.

However, the problems with pursuing a strategy of mitigation are many. The main problem is its cost. The changes contemplated by the United Nations Intergovernmental Panel on Climate Change in its Paris Treaty could cost as much as $140 trillion. That’s nearly double the annual total global economic output.

The original site of one of America’s first settlements, Virginia’s Jamestown, is now mostly underwater. It has been this way for more than a century, long pre-dating the current era of global warming.

Of course, if the fate of the human race is in the balance, some argue, no cost is too great.

But is that true? What if the price of saving humanity from future cataclysm doesn’t prevent that cataclysm, but simply moves it forward? What if mitigation efforts create economic cataclysm? What if good intentions kill or impoverish billions of people today, not on some hypothetical future date?

Mitigation is especially unattractive when you consider the other option: adaptation. Adaptation acknowledges what history and science teach us. Climate change is inevitable. We should not fight a costly battle we have no chance of winning. We should, instead, learn to live with climate change as a part of the natural processes of Planet Earth.

What might those adaptations look like? The number and scope of them are too many for an essay of this size. But any discussion of climate change usually includes sea level changes. So let’s consider one way to adapt to that possibility.

Note that coastline changes are not a new phenomenon. That’s one reason we started this series on climate change with a reminder about the North American Inland Sea.

Preparing for Loss of Coastal Cities

We have other reminders. Compare a modern map of most coastal cities to a map of that same city 100 or 200 or 300 years ago. You’ll likely notice big differences. The original site of one of America’s first settlements, Virginia’s Jamestown, is now mostly underwater. It has been this way for more than a century, long pre-dating the current era of global warming.

Changing coastlines aren’t a new thing, and we should prepare for more coastal cities to be underwater someday. But this isn’t cause for despair. There’s plenty of room to grow inland.

Note, too, that the need to build cities on coastlines and riverways has almost totally disappeared. From time immemorial until about 150 years ago, rivers and oceans were our transportation corridors. Not so today. Modern transportation systems have relieved our dependence on living near bodies of water.

Take the city of Atlanta, which in the past 40 years has grown to become one of the 10 largest metro areas in the nation. That inland area was originally called “Terminus.” It got that name because it was designated as the terminus of a railroad line by surveyors who had never even seen the place. Dallas and Denver share similar stories. Indeed, if we were starting from scratch and building cities today, one wonders if most of our coastal cities would even exist. Would we simply designate them recreational or natural areas?

Time to Phase Out the National Flood Insurance Program

Yet the federal government provides insurance for coastal properties that flood. Not just once, but sometimes repeatedly. These are properties that private markets deem too risky to insure. Properties that we have good reason to believe will be underwater in a century or less.

The National Flood Insurance program (NFIP) began in 1968. According to Politico, “As of 2016, the NFIP has over 5 million policies in force and saves policyholders around $3 billion annually.” Maybe, but the $3 billion it saves policyholders is exactly what it costs taxpayers. And over the years the program has accumulated about $24 billion in debt.

A common-sense adaptation would be to phase out this program over time. Multiple analyses of the program indicate that most of the money goes to affluent beach home owners. Progressives who want to reduce tax and other financial breaks for the wealthy could support such a move. Conservatives and libertarians have different reasons for eliminating the program. They say such programs are beyond the government’s purview in addition to a huge waste of money.

Over time, reforming or eliminating NFIP would likely have the benefit of returning thousands of acres of oceanfront land to an undeveloped state. That land would provide a buffer to sea level rise in some coastal areas.

This very will to act, this hope for success — these are the first casualties in a world defined by the worst-case scenarios of climate-change alarmists like David Wallace-Wells.