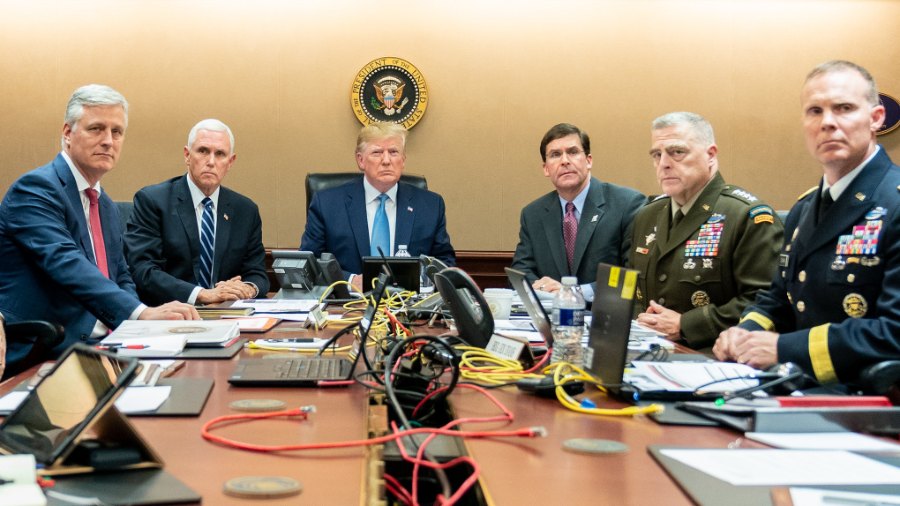 God has given authority to governments and rulers to punish evil with the sword. Pictured: President Trump, joined by Vice President Mike Pence and National Security Advisor Robert O’Brien on the left and Secretary of Defense Mark Esper, U.S. Army General Mark A. Milley, and Brig. Gen. Marcus Evans at right, monitored the operation that resulted in the death of ISIS leader Abu Bakr al-Baghdadi from the Situation Room in the White House.

I will leave it to others to reflect on the political and strategic implications of the killing of the ISIS leader Abu Bakr al-Baghdadi (see, for example, here and here). And enough has been said to ridicule the disastrous “austere scholar” headline of the Washington Post (see here and here and here). Allow me instead to offer some moral reflections on America putting this monstrous terrorist to death.

Good and Evil are Real

First, there really is such a thing as good and evil. ISIS is and was evil. Al-Baghdadi was evil, just as Hitler was evil.

Conversely, it is good to confront evil and to judge evil. And it was good to take out al-Baghdadi.

To be sure, there is more than enough moral ambiguity in our society, and many “good” causes become compromised by ulterior motives and human corruption.

As for life on earth, none of us are perfectly good (outside of Jesus; see Matthew 7:11), and even the most evil person has some good quality, having been created in God’s image.

Yet there is no denying that some people are downright wicked, and either in this world or the world to come, they will certainly pay for their sins.

Second, God has given authority to governments and rulers to punish evil with the sword. In the words of Paul, “For rulers are not a terror to good conduct, but to bad. Would you have no fear of the one who is in authority? Then do what is good, and you will receive his approval, for he is God’s servant for your good. But if you do wrong, be afraid, for he does not bear the sword in vain. For he is the servant of God, an avenger who carries out God’s wrath on the wrongdoer” (Romans 13:4-5).

Yes, governments, by the will of God, “bear the sword,” for good, not for evil. It is therefore a terrible abuse of God-given authority when a government or king or president or leader uses the sword to promote evil and to suppress good. What a serious offense.

Governments, by the will of God, “bear the sword,” but for good, not for evil.

But, to repeat, God does give the sword to governments and leaders. And without that “sword” — which includes both the local police and the national army — there will be chaos in the streets. And so, just as a mother or father uses “force” on a certain level (such as grounding a rebellious teenager or spanking a rebellious toddler), the government uses force on another level.

That’s how the Allies defeated the murderous designs of Adolph Hitler. It was by a united show of force.

Third, while it is easy to identify the evil of al-Baghdadi and ISIS, we must always remember that evil lurks near all of us.

Put another way, the Islamic terrorists of ISIS were fellow-human beings, not beings from another planet. Some of them were husbands who loved their wives and fathers who loved children. Yet these same men committed acts of unspeakable savagery, seemingly with glee.

It’s the same with people who have been guilty of horrific acts of human cruelty through the millennia. They, too, were fellow-human beings.

They were cut out of the same cloth as you and I. They had to make moral choices just as we do. And, over time, they chose to suppress the voice of conscience and harden their hearts until they could murder little children and slice open pregnant women without the slightest feeling of guilt.

If you’re reading this saying, “Not me! I’m really a very good person,” let me ask you this: How would you feel if we posted in real time for the world to see all your secret thoughts? How much pride is there? Lust? Greed? Hatred? Anger? Violence? Bitterness? Judgmentalism?

That said, we can still recognize unrepentant, bold-faced evil, as in the actions of Abu Bakr al-Baghdadi. And though we are all sinners, it’s still right to do our best to eradicate such evil, thereby saving many lives.

But it does mean that we always do well to search our own hearts, recognizing that every day, we are either hardening or softening our hearts. Why let evil of any kind infiltrate your mind and soul? Why allow any pollution to stain and defile you?

Redemption is Better than Death

Finally, there’s a fourth reflection, but one that is too late for al-Baghdadi. Simply stated, redemption is possible. Serial killers can be saved. Terrorists can be transformed. I know such people personally.

Some are in jail, paying for their crimes. Others are now paying back the society they once ravaged.

But in Jesus, through the gospel, dramatic and radical change can come.

Better a redeemed, forgiven, repentant and transformed terrorist than a dead terrorist.