This Week at War: Taking Command 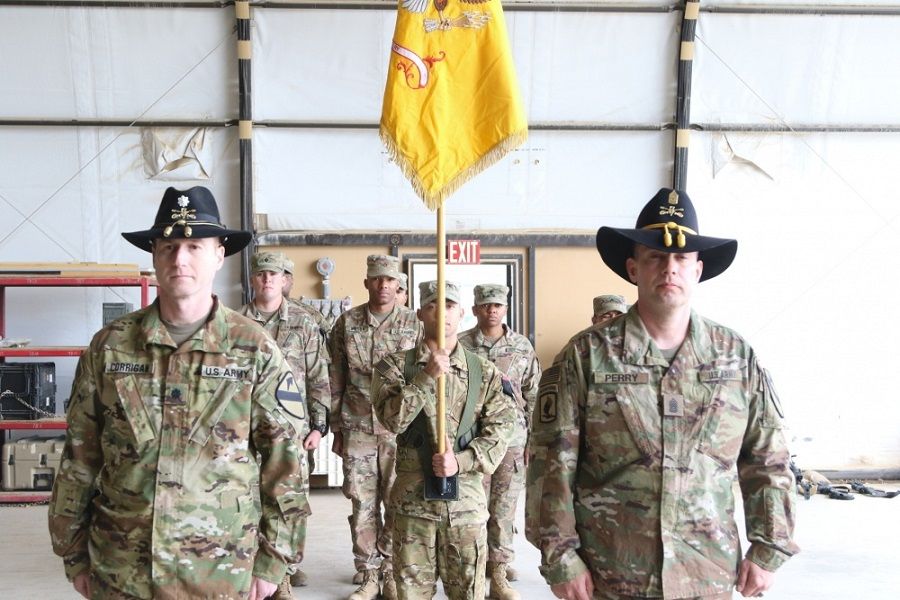 U.S. Army commanders stand at attention after unfurling the 7th Squadron, 17th Cavalry Regiment's colors in a transfer of authority ceremony in Erbil, Iraq, on February 23, 2018.

As much of the national media continued obsessing over all things Trump, more U.S. service members spent this week preparing for deployments to Afghanistan, where they will become the latest brave men and women to serve during America’s longest war.

Soldiers from the 2nd Infantry Brigade Combat Team of the U.S. Army’s 4th Infantry Division, according to this Military.com report, will leave Fort Carson in Colorado for Afghanistan “over the next several weeks” to join the war effort.

“The 2nd Infantry Brigade Combat Team of the 4th Infantry Division has a proud history in support of combat operations in Afghanistan,” U.S. Army Col. David Zinn said in a press release quoted in the Military.com article.

I wanted to highlight this passage from Eric Durr’s article: “Most of the soldiers were asked to volunteer for the mission at relatively short notice and stepped up to the plate.”

That sentence sums up the selfless courage of America’s volunteer warriors. We will be praying for the heroes of the 501st Ordnance Battalion and 2nd Infantry Brigade Combat Team, as well as their families, as they make enormous sacrifices for the cause of freedom.

Speaking of EOD warriors, I wanted to spotlight this brilliant New York Times piece written by my friend and co-author, U.S. Navy LT Brad Snyder (Ret.). Brad, who was blinded by an IED in 2011, won gold in the Paralympic Games exactly one year to the day after his life-altering injury. After more glory in the 2016 Paralympic Games, Brad is now teaching and inspiring others as a U.S. Naval Academy instructor and advocate for veterans.

To help others understand blindness and the differing experiences of others, Brad is urging more dialogue. “Through talking, we find humanity,” he writes in his op-ed, headlined “How to Really See a Blind Person.”

“Sometimes people ask me what I want others to know about being blind,” Brad writes. “I want others to feel more comfortable having conversations with people whose experiences are different from their own.”

Fire in My Eyes, a book that I played a small part in helping Brad write, was published in 2016. I hope you’ll check it out and gain more of Brad’s unique insights into life’s peaks and valleys.

The U.S. Army’s 7th Squadron, 17th Cavalry Regiment has arrived in northern Iraq to take a leadership role in the continuing fight against ISIS in that country and neighboring Syria. Last Friday’s ceremony marking the formal transfer of authority (shown above) occurred in Erbil, which is about 220 miles north of Baghdad.

We thank these warriors for their service to our nation and pray for their safe and swift return.

About 200 U.S. Navy reservists returned on Wednesday to Norfolk, Va., after a six-month deployment supporting military operations in Africa, the Middle East, and Europe. A U.S. Navy seabee embraces her son upon returning to Norfolk, Va., from a six-month deployment on February 28, 2018.

This Week at War: Grit and Gratitude