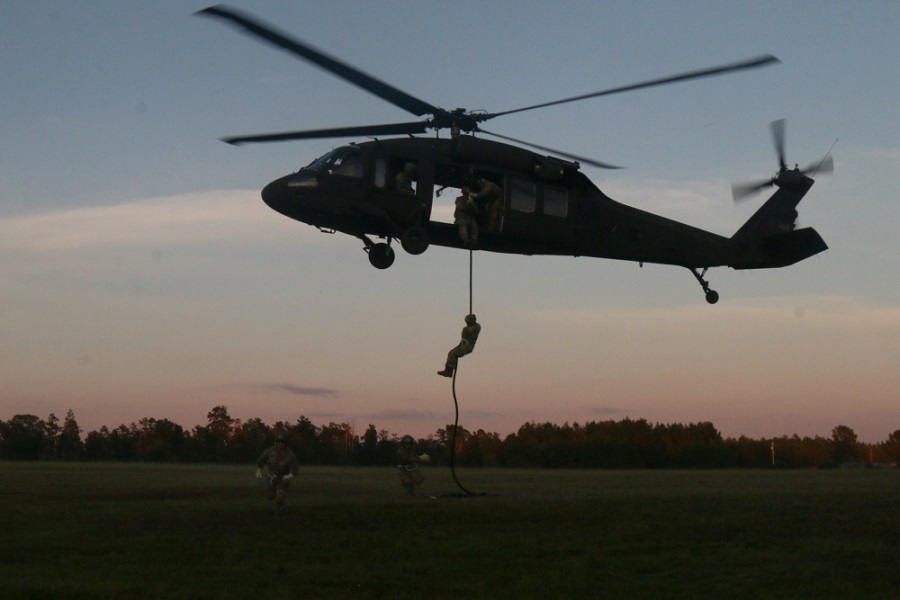 U.S. Army paratroopers fast rope from a UH-60 Black Hawk helicopter during a training exercise at Camp Shelby in Mississippi on September 29, 2019.

While U.S. troops at war risk their lives on a daily basis, many forget the dangers American service members often face here at home. A Wednesday night accident at Camp Shelby in Mississippi is a stark reminder of those perils.

NBC News reports that more than 20 U.S. Army paratroopers were injured after jumping out of a C-130 transport plane in high winds and crashing into a group of pine trees. Thankfully, none of the injuries are believed to be life-threatening, according to the report.

Please keep these injured soldiers and their families in your prayers this weekend. We ask God to grant them healing and comfort during this difficult time.

Renewed violence and turmoil is engulfing Iraq, where American troops are already stationed.

Reuters reports that “at least seven people were killed and more than 400 were injured” during several days of protests against Iranian influence this week in the Iraqi capital and around the country. Iraqi counter-terrorism forces also reportedly opened fire on an angry mob trying to storm Baghdad International Airport.

“Islamic State militants could also take advantage of any chaos and thousands of U.S. troops are stationed in the country in positions not far from those of Iran-allied Shi’ite militias,” the Reuters article said.

Please pray for our nation’s deployed heroes, as well as the people of Iraq.

The world still awaits the results of last weekend’s presidential election in Afghanistan, where U.S. troops will have been serving for 18 years as of this coming Monday.

Both candidates are declaring victory in an election that the Taliban and other terrorist groups put under a cloud of violent threats. Turnout was low, according to this Foreign Policy piece, which also notes that “there are no reliable exit polls in Afghanistan.” The final tally may not be known until next month and the losing candidate might not accept the results, as FP points out.

2019 has been the deadliest year for American forces in Afghanistan since 2015. Even though peace talks with the Taliban recently collapsed, we should all keep praying for an honorable end to America’s longest war.

During another week of political discord in Washington, there was a rare show of unity on Monday during a swearing-in ceremony for U.S. Army Gen. Mark Milley, who just became the 20th Chairman of the Joint Chiefs of Staff.

The special moment happened when U.S. Army Capt. Luis Avila, who lost his leg and was paralyzed by an improvised explosive device while serving in Afghanistan, sang “God Bless America.” At the song’s conclusion, President Trump immediately walked over to Capt. Avila and began embracing the wounded warrior and his wife, Claudia.

WATCH what Trump does after this AMAZING wounded Veteran sings “God Bless America”!

It doesn’t get more American than this! pic.twitter.com/AYLN9mOqMa

In a time of such vicious partisanship, I hope and pray that all political leaders — from President Trump to his Democratic opponents — will provide us with more moments like these. The sacrifices of courageous veterans like Capt. Luis Avila and equally heroic military spouses like Claudia Avila are bigger than politics.