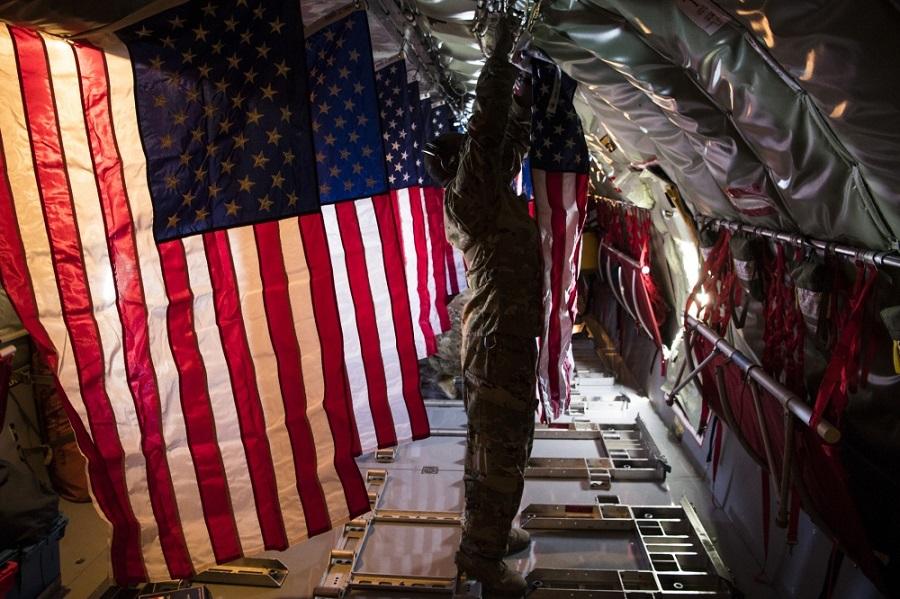 A U.S. Air Force airman deployed to the Middle East hangs American flags inside a KC-135 Stratotanker at Al Udeid Air Base in Qatar on September 24, 2019.

After almost 18 years of constant war, American forces are heading to yet another Middle Eastern country.

Brave U.S. troops will soon deploy to Saudi Arabia after an attack on an oil facility that the Trump administration, along with several of our European allies, believes was perpetrated by Iran.

“In response to the Kingdom’s request, the president has approved the deployment of U.S. forces which will be defensive in nature and primarily focused on air and missile defense,” Defense Secretary Mark Esper said last Friday.

This week, the Military Times reported that the deployment is currently on hold while U.S. officials gauge how many troops may be deployed by European countries.

“At this point, we’re going to wait and see what other countries are going to do in supporting Saudi (Arabia),” the Military Times quoted an unnamed official as saying.

General Joseph Dunford, Chairman of the Joint Chiefs of Staff, has said the total number of American troops will be “in the hundreds,” as the report notes.

As the Pentagon plans to defend Saudi Arabia from the threat posed by Iran, U.S. troops are still under fire in neighboring Iraq.

Two Katyusha rockets were fired in the direction of the U.S. Embassy in Baghdad on Monday night, “triggering alert sirens that sounded across the capital’s Tigris River,” according to the Associated Press.

“We take this incident seriously as do our Iraqi security forces partners,” a coalition statement said, adding that further attacks “will not be tolerated.”

The Stream is praying for all American troops serving in the Middle East, as well as their families here at home.

A presidential election will take place this weekend in Afghanistan, where U.S. forces have been serving and sacrificing since 2001.

Voice of America reports that tensions are high and security is tight as Afghans head to the polls. Saturday’s vote will decide whether Afghan President Ashraf Ghani serves a second term in office.

“The Taliban have threatened the elections and warned civilians to stay away from rallies and polling booths or suffer the consequences,” according to Ayesha Tanzeem’s article.

Please pray for all U.S. troops who are risking their lives in Afghanistan this weekend. We pray that Afghan civilians are able to vote in free and fair elections without further violence and bloodshed.

U.S. Navy sailors serving aboard the USS McFaul are home after an eight-month overseas deployment. A U.S. Navy sailor assigned to the guided missile-destroyer USS McFaul hugs his children after the ship returned to Naval Station Norfolk in Virginia on September 20, 2019.

Welcome home, heroes! Thank you for your service to our country.