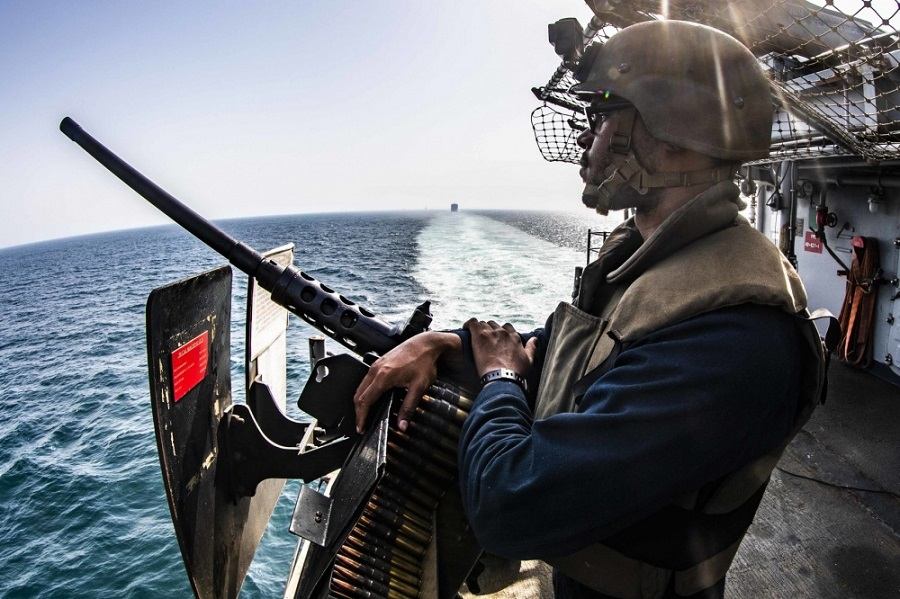 A U.S. Navy sailor stands watch aboard the amphibious assault ship USS Kearsarge as it transits the Strait of Hormuz on May 7, 2019.

Update: Secretary of State Mike Pomeo declared this afternoon “It is the assessment of the U.S. government that Iran is responsible for today’s attacks in the Gulf of Oman. These attacks are a threat to international peace and security, a blatant assault on the freedom of navigation, and an unacceptable escalation of tension by Iran.”

It is the assessment of the U.S. government that Iran is responsible for today's attacks in the Gulf of Oman. These attacks are a threat to international peace and security, a blatant assault on the freedom of navigation, and an unacceptable escalation of tension by Iran. pic.twitter.com/cbLrWNU5S0

Fears of war with Iran escalated Thursday as U.S. Navy ships rushed to the Gulf of Oman after two oil tankers were attacked near the Strait of Hormuz.

The US Navy's Fifth Fleet says it is aware of a "reported attack" on two oil tankers in the Gulf of Oman. https://t.co/hJkujpEpIl

“The official said any retaliation from the U.S. would depend on the evidence found linking the attacks to Iran, and on the attitudes of other Gulf countries,” the CBS News report said.

Additional U.S. military warships, bombers and troops already deployed to the Middle East in May to counter the threat posed by Iran. By any measure, Thursday’s tanker attacks, which caused oil prices to immediately increase, will ratchet up tensions even further.

Please pray for the thousands of American troops in harm’s way at this hour. We should also ask the Lord to impart His wisdom onto our country’s leaders as they seek to avoid another bloody and costly war in the Middle East.

As U.S. service members continue risking their lives in Afghanistan and Iraq, two heroes of the post-9/11 conflicts are being honored for their courage.

U.S. Army Staff Sgt. Michael Ollis, who you’ve hopefully had a chance to read about right here on The Stream, was killed in Afghanistan on August 28, 2013. He made the ultimate sacrifice while shielding a Polish army officer from a suicide bomb blast. The Polish lieutenant later named his infant son after the American hero who saved his life.

Staff Sgt. Ollis initially received the Silver Star for his selfless acts. Over the weekend in the fallen soldier’s hometown of Staten Island, New York, that award was posthumously upgraded to the Distinguished Service Cross. It’s the second-highest honor any U.S. Army soldier can receive.

“Every generation has its heroes,” U.S. Army Gen. James McConville said during his remarks. “Michael Ollis is one of ours.”

Another Army Staff Sergeant will soon have his Silver Star upgraded to the Medal of Honor, as announced this week by the White House.

Staff Sgt. David Bellavia fought in the the Second Battle of Fallujah, which was one of the most violent U.S. military engagements since Vietnam. Bellavia is credited with twice entering a house full of insurgents with no regard for his own safety to save pinned down U.S. troops.

“That remarkable day, then-Staff Sergeant Bellavia rescued an entire squad, cleared an insurgent strongpoint, and saved many members of his platoon from imminent threat,” the White House said.

“Never in my life had I seen anything like that,” Bellavia said of the fateful day’s violence in this U.S. Army story.

President Trump will present the nation’s highest military honor to the retired Army hero on June 25 at the White House.

A group of U.S. Marines is back on American soil after a six-month deployment to Okinawa, Japan. A U.S. Marine platoon commander embraces his wife during a homecoming ceremony on Marine Corps Base Hawaii on June 7, 2019.