This Week at War: Binding Us Together 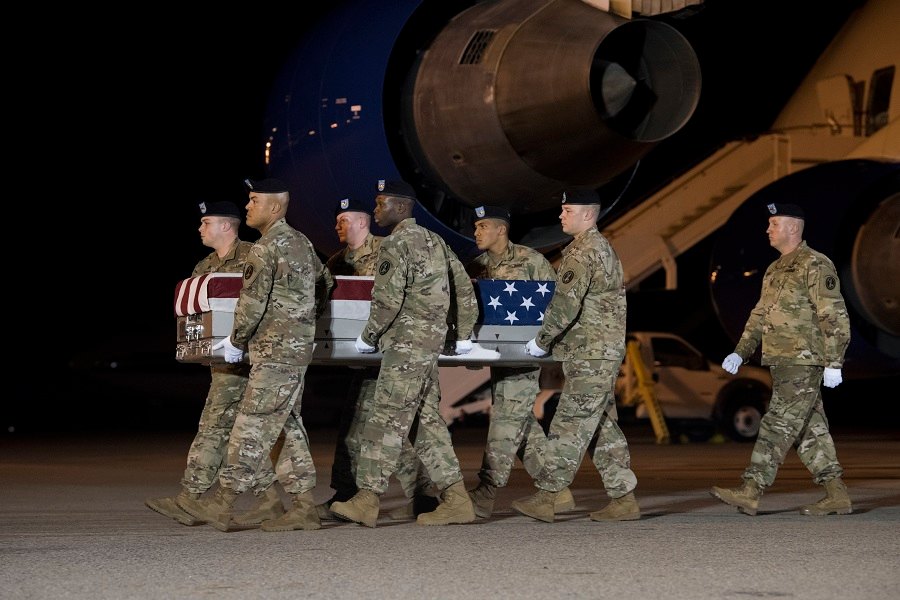 A U.S. Army carry team transfers the remains of U.S. Army Sgt. James Slape on October 6, 2018, at Dover Air Force Base in Delaware.

A flag-draped casket carrying the eighth American warrior to make the ultimate sacrifice in Afghanistan this year has returned to American soil.

According to the Pentagon, U.S. Army Sgt. James Slape, 23, died in the war zone’s southern Helmand Province on October 4 “of wounds sustained from an improvised explosive device.” The tragic incident is under investigation.

Just before flags were lowered to half-staff on Tuesday in the fallen soldier’s home state of North Carolina, the Morehead City native’s family released a series of emotional statements.

“I have seen that some people’s reaction to a loss like this is to back down from the fight,” Sgt. Slape’s brother, Pvt. William Slape, wrote. “I believe that instead of being discouraged, it should create a spark in everyone to continue the fight. After experiencing this loss first hand, it has instilled a greater feeling of responsibility to complete the mission that my brother has fought and died for.” According to the soldier’s moving obituary, James is also survived by his parents, Jim and Trish, and his wife, Shawn, who knew “that they would have a tough road ahead with James leaving for Afghanistan less than a year into the marriage.”

From the Cub Scouts to the U.S. Army, James put protecting his family and country above all else. After enlisting during his senior year of high school, the selfless patriot eventually chose a very challenging path: that of an Explosive Ordnance Disposal (EOD) technician. As retired U.S. Navy EOD officer Brad Snyder describes in Fire in My Eyes, the training and sacrifices required to serve inside a bomb disposal unit are among the military’s most rigorous.

No matter how busy, James always made time for God, according to his obituary.

“He had a love of God and attended several different churches in Morehead City and while he was training at Fort Jackson and Eglin Air Force Base,” it reads.

Hopefully, the Lord will wrap His arms around the fallen hero’s grieving wife. After all, “their love knew no bounds and reached across the ocean to bind them together more each day.”

Our national discussion is full of ugliness these days; particularly during the last few weeks. Amid so much divisive rhetoric, perhaps a soldier’s unshakable patriotism, faith and love for his wife can bind us together as well.

A memorial service for Sgt. James Slape will be held in his hometown of Morehead City on Veterans Day weekend. In the meantime, please pray for this American hero’s wife, parents, brother, relatives, friends and fellow soldiers.

While this weekly feature usually focuses on Afghanistan, Iraq and Syria, we would be remiss not to mention our military’s extraordinary efforts in the wake of a devastating natural disaster.

From the Carolinas all the way down to Florida, the National Guard is helping millions of Americans affected by Tropical Storm Michael, which made landfall on Wednesday as a fierce Category 4 hurricane near Tyndall Air Force Base on the Sunshine State’s Panhandle.

#HurricaneMichael may be almost gone, but our 715th #Military Police Company is here, assisting in #disaster relief and security operations throughout the impacted area of the Panhandle. You #Soldiers make us proud to be #FloridaFirst #FLNGAlwaysThere pic.twitter.com/mqZxo14m51

Thank you to our country’s selfless men and women in uniform for saving lives and lending a hand to those in need.

This Week at War: War is Not a Movie

This Week at War: National Treasures