This Week at War: Prayers for the Fallen 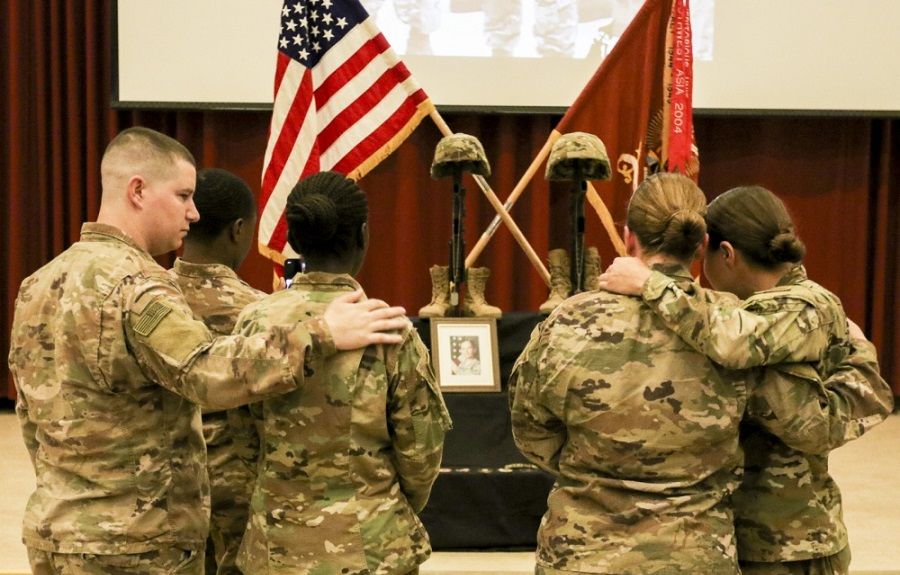 Soldiers comfort each other in front of fallen soldier crosses during a memorial ceremony for U.S. Army Sgt. Holli Bolinski and Spc. Jackson Johnson on March 8, 2019, at Camp Arifjan in Kuwait.

A memorial service was held at Camp Arifjan for two U.S. Army Reserve soldiers who were killed in a tragic vehicle crash earlier this month in northern Kuwait.

According to the Army, Sgt. Holli Bolinski, 37, and Spc. Jackson Johnson, 20, died on March 5 “when their vehicle collided with a civilian commercial truck.” A third American soldier was also injured in the crash.

Both fallen reservists were from the St. Louis area, where their families are “in disbelief,” according to KTVI-TV. Sergeant Bolinski was a married mother of five, yet was still willing to risk everything for the country she loved.

“She loved being in the Army,” the fallen hero’s sister, Mendi Sroka, told the TV station. “She loved to protect people.”

Specialist Johnson’s deployment to the Middle East was his first since volunteering to serve three years ago.

As these American patriots are laid to rest, please pray for their loved ones, along with the third soldier hurt in the accident. We ask God to comfort them in the wake of this devastating tragedy.

As combat operations continue in Iraq, another fallen hero is set to posthumously receive the nation’s highest military award.

U.S. Army Staff Sgt. Travis Atkins, who made the ultimate sacrifice on June 1, 2007, will receive the Medal of Honor for tackling a suicide bomber, “pinning him to the ground and shielding his soldiers from the imminent explosion,” according to a prior award citation quoted by Military.com. Hope Hodge Seck’s report notes that the 31-year-old Montana native is survived by his son, mother and father.

President Trump will present the Medal of Honor to Staff Sgt. Atkins’ family at the White House on March 27 in what is sure to be an emotional ceremony.

America’s longest war continues in Afghanistan, where more violence is being reported this week in Uruzgan province near the southern city of Tarin Kot.

CBS News reports that the Pentagon is investigating a possible friendly fire incident that resulted in the deaths of “at least five” Afghan soldiers while they were under attack from enemy Taliban forces. Several Afghan troops were wounded as well.

While any friendly fire death or injury is tragic, the apparently mistaken U.S. airstrike underscores the ongoing difficulties of targeting terrorists who hide in the shadows.

“We are operating in a complex environment where enemy fighters do not wear uniforms and use stolen military vehicles to attack government forces,” said U.S. mission spokesman Bob Purtiman, as quoted by CBS.

Please pray for the families of these fallen and wounded Afghans, as well as the war-torn country’s civilians caught in the crossfire. As The Stream reminds readers every week, there are approximately 14,000 brave American troops still serving in Afghanistan. These warriors and their families are always in need of our continued prayers.

A group of U.S. Army soldiers who were deployed as part of Operation Atlantic Resolve recently returned from Europe. A U.S. Army soldier is reunited with his 6-month old daughter during a homecoming ceremony at Fort Carson in Colorado on March 8, 2019.