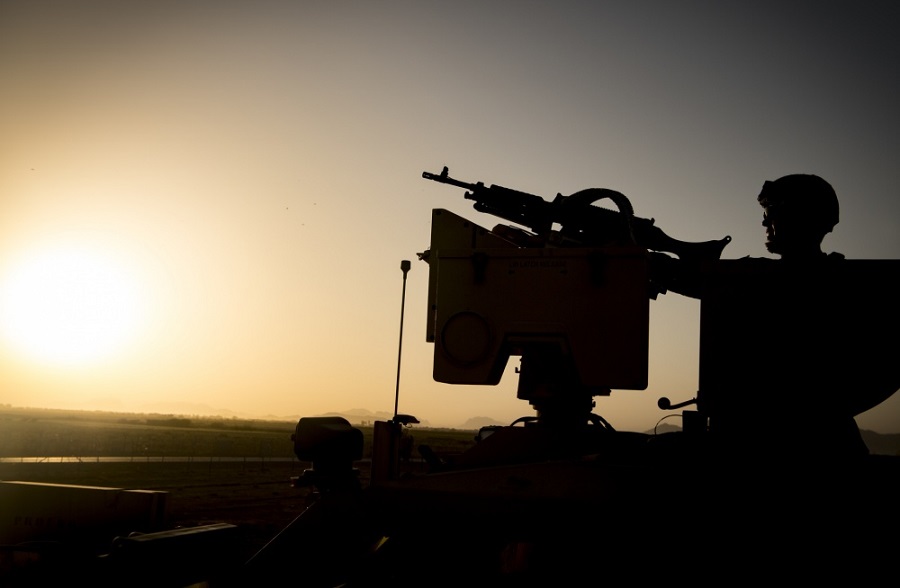 A security forces member deployed to Kandahar Airfield in Afghanistan conducts perimeter sweeps of the base on August 23, 2019.

As the war in Afghanistan nears the 18-year mark, the U.S. military community is mourning its bloodiest day of fighting there in recent memory.

An American service member was killed on Thursday when the Taliban carried out a suicide bombing at a checkpoint near the U.S. Embassy in Kabul. A Romanian soldier also died in the attack, according to NATO.

BREAKING: The NATO Resolute Support mission in Afghanistan says a U.S. service member and a Romanian soldier were killed in the Taliban suicide car bombing in Kabul. https://t.co/LcL6rYgCp8

Also on Thursday, there were three suicide bombings outside an Afghan military base in Logar Province, which is just south of the country’s capital.

According to Newsweek, at least nine U.S. Army Special Forces soldiers were injured – “some seriously” – in the third attack. James LaPorta and Tom O’Connor report that “the nine soldiers were medically evacuated with traumatic brain injuries under ‘Category C,’ a priority classification in the U.S. military medical system that applies when a soldier needs, ‘medical or surgical attention intervention within four hours for the preservation of life, limb, or eyesight.'”

Please pray for the wounded, the fallen and their families after a tense, tragic day that will impact countless lives for years to come.

#BREAKING @Newsweek has learned that in a separate suicide attack today in Logar Province in #Afghanistan – Nine members of a U.S. #Army Special Forces team were wounded and have been evacuated with traumatic brain injuries. https://t.co/gWdUEMSYAo

Three of those extraordinary kids are the children of fallen U.S. Army Master Sgt. Luis DeLeon-Figueroa, who died on August 21 in Afghanistan’s Faryab Province. The Special Forces soldier, 31, made the ultimate sacrifice alongside another decorated Green Beret, 35-year-old Master Sgt. Jose Gonzalez.

When Master Sgt. DeLeon-Figueroa was laid to rest on Tuesday in Agawam, Massachusetts, one of his three daughters – Angie, who is just 9 years old – stepped forward to read a touching letter.

“Dear Papi, I miss you a lot. I wish you were still alive,”Angie said. “It doesn’t feel right without you. I want to thank you for being a great hero and a great daddy.

“I know you’re in heaven now, Daddy, with my grandma, but I miss you so much,” the little girl continued. “I miss our time together. I’ll miss going to the beach and the movie theaters together. I miss your hugs and kisses. I will try to make you proud and behave like you always told me to.

“You are forever my Papi and know that my mom and family will take care of me,” Angie said in conclusion. “I used to be your angel and now, you’re mine.”

It is impossible to adequately express how much sympathy and love we feel for this precious child and her siblings. We ask God to fill the hearts of these kids and their mother with strength as they begin this very difficult journey without a beloved father and husband. Like Angie said, Master Sgt. Luis DeLeon-Figueroa is watching over them from heaven.

"I used to be your angel and now, you're mine." – Angie Deleon

Fallen soldier Master Sgt. Luis Deleon-Figueroa being eulogized by his daughter is incredible.

Her strength… wow. May her father's memory always be a blessing.

A third Green Beret was killed in action on August 29 in Afghanistan’s Zabul Province.

U.S. Army Sgt. 1st Class Dustin Ard, 31, died “as a result of wounds sustained while engaged in combat operations,” according to the Pentagon. The Hyde Park, Utah, soldier was the 20th American service member to make the ultimate sacrifice in Afghanistan this year.

According to Stars and Stripes, Sgt. 1st Class Ard leaves behind a three-year-old daughter and pregnant wife.  The Green Beret was posthumously awarded a Bronze Star and a Purple Heart for the courage he displayed on his second and final Afghanistan deployment.

“Sgt. 1st Class Ard’s loss is felt across our 1st Special Forces Group Family,” U.S. Army Col. Owen Ray said. “Our priority now is to take care of his family and our soldiers and provide the best possible care that we can during this incredible time of need.”

Lord, please wrap Your arms around all four of America’s newest Gold Star families. With the help of their fathers, please hold the children extra tight.

American troops are still risking their lives in Iraq, with last month’s death of U.S. Marine Gunnery Sgt. Scott Koppenhafer serving as a tragic reminder. According to Fox News, the ongoing fight against ISIS recently became even more dangerous.

The report said ISIS fighters planted explosives inside two cows on Sunday near an Iraqi military checkpoint in Diyala Province. One civilian was reportedly killed when the cattle blew up during a firefight.

The threats our brave men and women in uniform face on a daily basis are constantly changing. We pray for our nation’s warriors as they continue to battle some of the world’s most vicious terrorists.

A group of U.S. Navy sailors recently returned to Pearl Harbor after three months at sea aboard the guided-missile destroyer USS Michael Murphy. A U.S. Navy sailor assigned to the USS Michael Murphy kisses his wife during a homecoming ceremony on August 19, 2019, at Pearl Harbor in Hawaii.