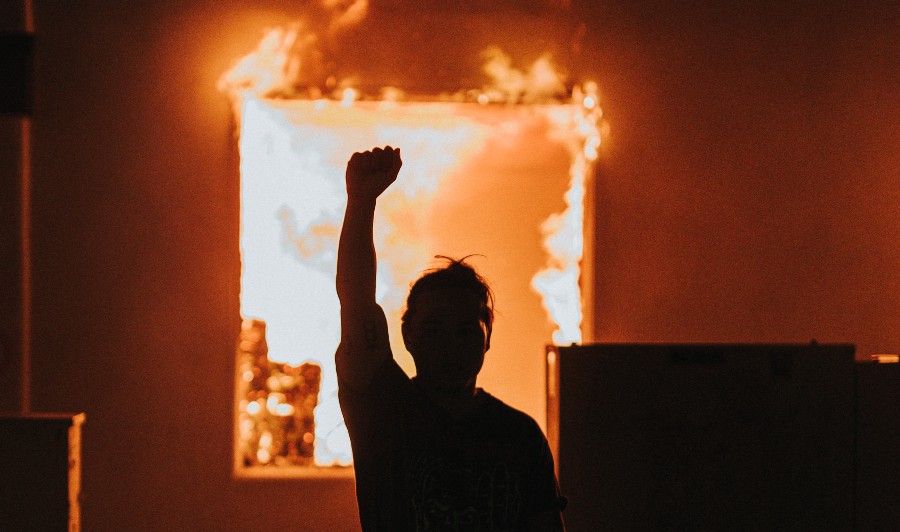 There is nothing nice about the mob. It is ugly. It is tyrannical. It is unreasonable. It is violent. It is oppressive, not liberating. Destructive, not life-giving. It is grounded in rebellion. It operates by the power of fear. And it leads to chaos and anarchy. That’s why the mob must be resisted.

Of course, the mob, be it Antifa or radical BLM or whoever, claims to have lofty goals. It champions the rights of the people. It is here for justice and equality. It stands for tolerance and diversity.

In reality, though, it is anything but noble, bearing the stench of hell rather than the scent of heaven.

That’s why it was no surprise to read last November, “Rioters in Portland smashed up a local church that helps the homeless and mentally ill — as well as a feminist and LGBTQ-friendly fashion store.”

Many noted the irony of the church and business being damaged given the protesters’ messages of unity.

“Is this before or after they were chanting ‘this is what community looks like!’” one person tweeted sarcastically.

Yes, this is the mob version of “community” — vandalizing a church that cares for the homeless and the mentally ill as well as trashing an LGBTQ-themed store. With regard to the former, this reveals the mob’s heart for the hurting and the poor. With regard to the latter, once more the left devours its own.

The Fences Were Still Necessary

Last month, in Portland, the police department took down a fence it had erected in June 2020 around the Mark O’Hatfield Courthouse, recognizing that it was seen as a symbol of division. This move had been discussed for months, as city leaders met together, wanting to help return the city to normalcy.

“[T]he cops don’t have the manpower to protect the several properties used by the church.” — Roger Archer, pastor of Motion Church

But no sooner did the fence come down than the rioters took over again. As reported by Fox News, “just one day after the fencing was removed, rioters marched down the streets of Portland, setting fires and smashing windows.”

This is the mindlessness (and madness) of the mob. Take one conciliatory step in the mob’s direction, and you will quickly get burned.

The latest example of mobocracy comes from a church in Washington State, deciding to cancel a speaking event after Antifa activists allegedly “threatened to burn down all of its buildings and torch the neighbors’ properties too.”

According to Roger Archer, pastor of Motion Church in Puyallup, Washington, his congregation has invested heavily in the local community for years, but when he announced that they were hosting Charlie Kirk next month, the threats came pouring in.

Since they have multiple campuses and since the local police are stretched thin, he felt it was wisest to shut the event down entirely.

As he explained, “the soft targets of churches, the elderly, women, children, and law-abiding citizens are vulnerable to anarchists who live free of the fear of reprisal. [T]he cops don’t have the manpower to protect the several properties used by the church.”

Although news outlets are still seeking confirmation as to the origin of these threats, others made their sentiments perfectly clear, with tweets like this one from a feminist named Shannon: “@charliekirk11and his #racism will be speaking at the #motionchurch in #southhill #puyallup on 5/2. #BlackLivesMatter @ProjectLincoln @MeidasTouch #LGBTQ HELP US SHUT THIS [email protected] down please!”

Yes, Nazis like Charlie Kirk must be silenced. This is the method of the mob.

Core Convictions Must Remain, Regardless of Threats

Of course, Pastor Archer could have decided to hold the meeting anyway, making clear that he and his people would not be intimidated. “Go ahead and threaten. We will not back down.”

But local pastors also have to consider any negative impact on their own community, not wanting to create an environment where rioters will wreak havoc and where attendees could be injured or attacked.

Either way, what pastors cannot do is to back down from their core convictions, even while deciding what is the best way to get the message out. And under no circumstances can they yield an inch to the mob, lest that inch quickly becomes a mile.

Let’s pray for Motion Church to stand tall and strong, serving the community while standing for righteousness. And let’s pray for the spirit of the mob to be revealed more and more, exposing its true, godless, destructive colors.

Let’s also pray for the conversion of the most extreme rioters and radicals. Some of them could become powerful evangelists in the days ahead, taking to the streets with a message of life and liberation as they now give themselves to destruction and bondage.

Even as I write, in my mind’s eye, I can see it coming. From rioters to revivalists!