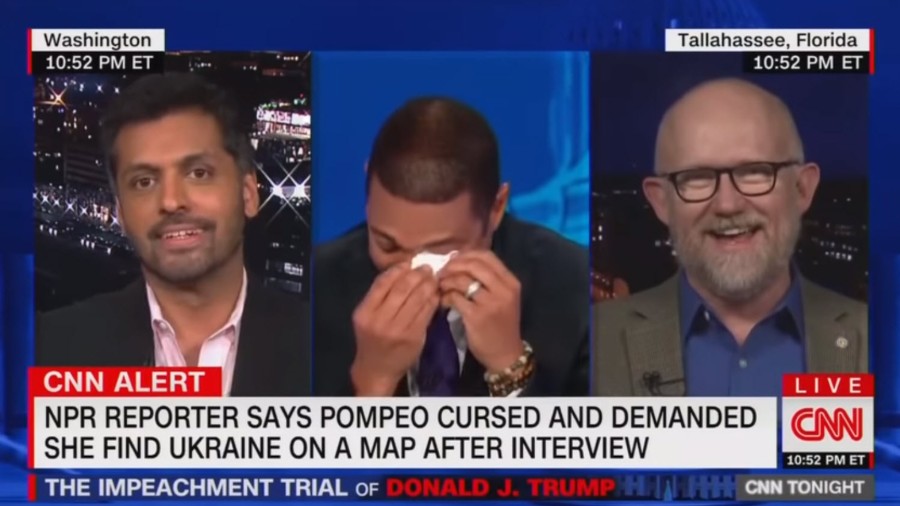 Lemon, who is the defendant in a scandalous sexual assault case, was dishing about Secretary of State Mike Pompeo’s dustup with a NPR reporter who reportedly could not find Ukraine on a map.

“[Pompeo] also knows deep within his heart that Donald Trump couldn’t find Ukraine on a map if you had the letter U and a picture of an actual physical crane next to it,” Wilson said. “He knows that this is, you know, an administration defined by ignorance of the world. And so that’s partly him playing to the base and playing to their audience. You know, the credulous boomer rube demo that backs Donald Trump.”

That “credulous boomer rube demo” would be the gun-toting, Bible-clinging, Deplorables who sent Donald J. Trump to Washington, D.C. to irrigate the Deep State Swamp. I wrote an entire book about this. Click here to get a copy.

“‘Donald Trump’s the smart one — any y’all elitists are dumb!'” Wilson said with a fake southern accent.

“‘You elitists with your geography and your maps — and your spelling!'” Ali added.

Lemon doubled over on the anchor desk with tears in his eyes — laughing like Anderson Cooper on New Year’s Eve. He had the look of someone who had just peed himself on national television.

“Don Lemon, the dumbest man on television (with terrible ratings!),” the president wrote.

The president speaks the truth — not even Brian Stelter or Oliver Darcy watch Lemon’s show.

Lemon and Ali are textbook examples of socially-acceptable racists. The bosses turn a blind eye to the hate spewing nightly from Lemon’s mouth.

Imagine what would have happened had a white news anchor giggled uncontrollably as his guests mocked black people. They would’ve been run out of the country.

“Arrogant, elitist snobs w/ noses so high in the air a good rain would drown them,” Gov. Mike Huckabee wrote on Twitter. “Keep up your contempt of us deplorable ‘hillbillies.’ Laugh at us loud now. Election night when @realDonaldTrump wins in landslide reelection, I’m sure you won’t look so smug.”

Arrogant, elitist snobs w/ noses so high in the air a good rain would drown them. Keep up your contempt of us deplorable "hillbillies." Laugh at us loud now. Election night when @realDonaldTrump wins in landslide reelection, I'm sure you won't look so smug. https://t.co/bstNxKF9Xq

It’s not the first time that the soy milk and Mexican man shoes crowd has smeared the president’s base. We’ve been called worse.

President Obama infamously accused folks in the Rust Belt of clinging to their guns and their religion. He called them bitter. Hillary Clinton called us a basket of deplorables. And former Vice President Joe Biden said we were the dregs of society.

Honestly, folks — I’d rather be a gun-toting, Bible-clinging, illiterate hillbilly than a perpetually-offended, pajama boy snowflake.

So good luck with that lawsuit, Mr. Lemon. And to show there are no hard feelings — here’s a word of advice from all of us hillbilly rubes — it ain’t nice to grope your goodies and assault another feller. Allegedly. Even in the big city.