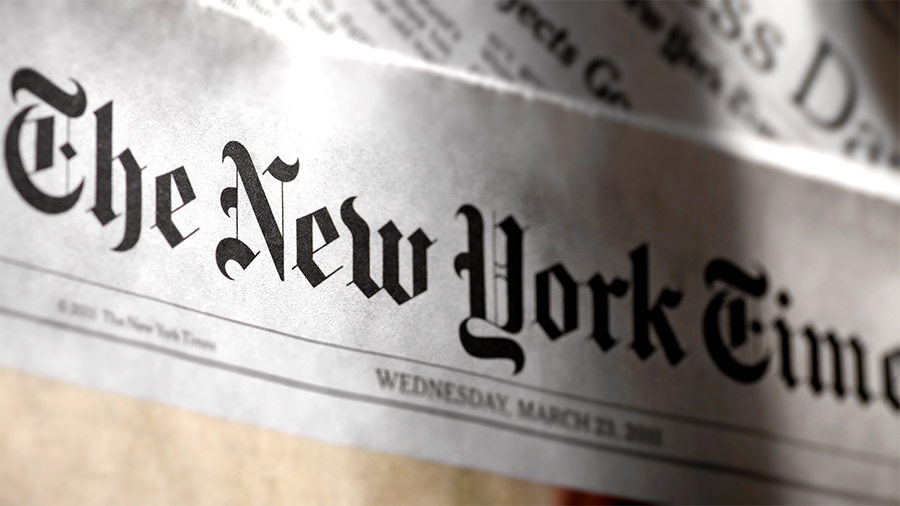 Do you remember when the New York Times was the most prestigious publication in America? When a positive story from the Times would jump start similar stories across the nation? Today, pushing back against the cancel culture in their own midst, editors from the Wall Street Journal wanted everyone to know that, “We are not the New York Times.” How the times have changed. (Or, should I say, “How the Times has changed”?).

In response to a letter signed by 280 Wall Street Journal employees, the editors wrote, “It was probably inevitable that the wave of progressive cancel culture would arrive at the Journal, as it has at nearly every other cultural, business, academic and journalistic institution. But we are not the New York Times. Most Journal reporters attempt to cover the news fairly and down the middle, and our opinion pages offer an alternative to the uniform progressive views that dominate nearly all of today’s media.”

What a rebuke to the Times.

The editorial was titled, “A Note to Readers. These pages won’t wilt under cancel-culture pressure.”

This stands in stark contrast with the Times, which has completely wilted and capitulated under pressure. (Or, perhaps, the Times has simply shown its true colors, not caving in as much as making its deepest convictions known?) And, rephrasing what the Journal editors stated, most New York Times reporters do not “attempt to cover the news fairly and down the middle.”

We don’t only have the much-publicized, deeply-concerning resignation letter of Bari Weiss. We also have the resignation of James Bennett, the editor of the editorial page of the Times. His crime was allowing an editorial to be published by Sen. Tom Cotton, supporting President Trump’s plan to bring in military troops to deal with the violent riots in our cities.

Oh, the horror! A conservative viewpoint penned by an elected senator supporting the president’s plans. Not on these hallowed pages!

As explained by the Times on June 7, “At an all-staff virtual meeting on Friday, Mr. Bennet, 54, apologized for the Op-Ed, saying that it should not have been published and that it had not been edited carefully enough. An editors’ note posted late Friday noted factual inaccuracies and a ‘needlessly harsh’ tone. ‘The essay fell short of our standards and should not have been published,’ the note said.”

I can imagine an interested Times reader saying, “Oh my. Cotton’s op-ed really falls short of the Times normal literary standards. And his tone is so harsh. This is so different from the op-eds I normally read here, which are so balanced, fair, even-handed, and kind.”

A more accurate assessment of the situation at the Times is that of an unnamed Times staffer who told the New York Post that the Times leaders are “terrified of the young ‘wokes.’”

The Young “Wokes” Couldn’t Handle an Accurate Headline About Trump

In this case, the staffer was referring to young “wokes” who work at the Times. But the young “wokes” outside the Times are making their impact as well.

To give an extremely glaring example, after the tragic El Paso shooting last year, where a white supremacist murdered Hispanics in cold-blood, President Trump issued a strong statement. He said, in part, “In one voice, our nation must condemn racism, bigotry, and white supremacy. These sinister ideologies must be defeated. Hate has no place in America. Hatred warps the mind, ravages the heart, and devours the soul. We have asked the FBI to identify all further resources they need to investigate and disrupt hate crimes and domestic terrorism.”

The statement, overall, was a powerful rebuke to racism and bigotry, and it called for a bipartisan stand against white supremacy. Accordingly, the Times headlined their front-page article on the statement, “TRUMP URGES UNITY VS. RACISM.”

But that fairly-worded headline only infuriated the woke mob, with Alexandria Ocasio Cortez writing, “Let this front page serve as a reminder of how white supremacy is aided by — and often relies upon — the cowardice of mainstream institutions.”

Seriously? By rightly titling an article about the president’s renunciation of racism, bigotry, and white supremacy, the Times displayed “cowardice” and actually aided “white supremacy”? Really?

The real display of cowardice came when the Times’ second-print edition changed the headline to, “ASSAILING HATE BUT NOT GUNS.” (For the possible influence of Nate Silver’s tweet, differing with the initial headline, see here.)

Talk about wilting under pressure from the cancel culture. Talk about bowing down to the politically correct spirit of the age. Talk about the left, once again, eating its own.

It’s as if Animal Farm had its own newspaper.