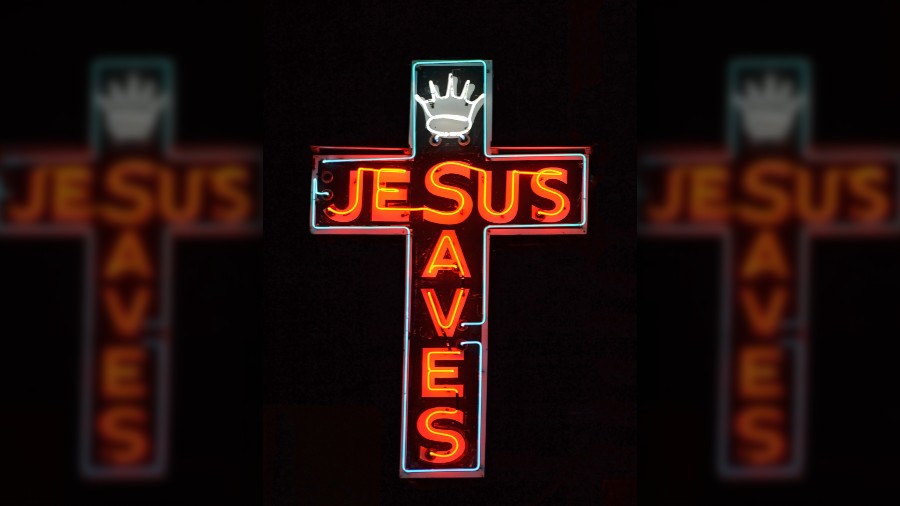 As a boy growing up in New York City, I often took the subway with my father. At one of our most frequent stops, two words had been carved into the distant wall, across from the subway platform. How someone managed to get over there to scrawl those words, I never knew. I also had no idea what the words meant. “Jesus saves”?

Growing up in a Jewish home, Jesus was not a frequent topic of conversation. So, it never dawned on me to ask my dad what “Jesus saves” actually meant. Nor had anyone had ever come to me and asked, “Are you saved?” What on earth would that mean?

“Jesus Saves From What?”

One of my friends is a Jewish believer in Jesus who was also confounded by the message that “Jesus saves.” Before he came to faith in Jesus, he was driving his car one day and saw a truck with those two words painted boldly on the back doors: JESUS SAVES.

He wondered to himself, “Did they run out of paint? Where’s the rest of the message? Jesus saves from what?”

Then there was the tongue-in-cheek response from Boston in the days when Phil Esposito was the great goal scorer for the Boston Bruins hockey team. The saying went like this: “Jesus saves and Esposito scores on the rebound.” Yet another meaning for “saves.”

“We Don’t Need Jesus to Save Us”

There was even the bumper sticker battle over the “I Found It” campaign in the mid-1970s, organized by an Orthodox rabbi with whom I attended grad school. In response to the Christian evangelistic campaign, this rabbi fought back with, “We Never Lost It.”

My response to this is simple: all of us need saving. Jew or Gentile. Rich or poor. Black or white. Young or old. Whoever we are, we need to be saved.

As he explained to me during one of our long talks on our way to the university, “We Jews do not need saving.” In other words, he was saying, “We have our own relationship with God and our covenant with God. We don’t need Jesus to save us.”

My response to this is simple: all of us need saving. Jew or Gentile. Rich or poor. Black or white. Young or old. Whoever we are, we need to be saved.

But what, exactly, does it mean to be “saved”?

Understanding the Greek Word for Save, Sozo

Sometimes, we have over spiritualized the concept to the point that it is little more than an abstract theological category. But when we look at how the Greek word sozo, save, is used in the New Testament, we realize it is anything but abstract.

Think of someone drowning in shark-infested waters, crying out to a passing boat, “Save me!”

Think of someone on the third floor of a burning building, screaming out to the firemen, “Save me!”

That is what it means to be saved.

In Luke’s Gospel, in the space of just two chapters, the verb sozo is used with reference to being saved from sin (7:50 = forgiven), saved from demons (8:36 = delivered), saved from sickness (8:48 = healed), and saved from death (8:50 = resurrected). Being “saved” is anything but ethereal and abstract.

And when we rightly understand our wretched, human condition without God, also recognizing His perfect holiness and justice, we realize that yes, all of us need to be saved.

As I write these words on Good Friday, in the midst of the Passover season, I’m reminded of a simple but profound truth. If there was any other way for the human race to be saved, Jesus would not have died on the cross. If there was a lesser price that could have been paid, God would not have paid this ultimate price.

The prophet Isaiah described it all so beautifully in one short sentence: “We all, like sheep, have gone astray, each of us has turned to our own way; and the LORD has laid on him the iniquity of us all” (Isaiah 53:6).

We sinned, He died. We were guilty, He took our punishment.

I discovered the meaning of “Jesus saves” at the age of 16 as a heroin-shooting, LSD-using, hippie rock drummer. But I was not “lost” because I was a rebellious drug user. The drug use and pride and rebellion were just a symptom of my lostness.

For others, our lostness is manifest in religious pride. Or self-righteousness. Or greed. Or selfishness. Or idolatry. Or sexual immorality. Or a host of other sins.

(For further thoughts on the significance of the death — and resurrection! — of Jesus, see my new book, Resurrection: Investigating a Rabbi from Brooklyn, a Preacher from Galilee, and an Event that Changed the World.)